Last week's Call of Cthulhu session ran long, but things were going entirely too well - for me as Keeper at least - to be willing to end the session at our usual cut-off time.  Things began to really ramp up here, and I think within the next few sessions we'll see the animal waste really start to hit the electric oscillator as far as the player-characters are concerned.  This was also, sadly, Greg's last session with us - his work contract had ended and he's leaving Rochester, so won't be able to be here on Tuesday nights any more.  Don't worry, we gave him one Hell of a send-off!


Despite the untimely death of Abelard, the Federated Oil and Chemical-backed expedition to Cobb's Corners in search of the Outer Ones, or "metch kangmi" as they may be known, has gone forward as planned, now as much, perhaps, of a mission of revenge as anything else.  For Darren and Perry, it was a return to the MacLearan farmhouse where their adventures began, for Nick and Nathanlie, it was all new.  FOC had renovated and reinforced the farmhouse, installing a radio antenna and powerful electric lights around the outside.  Morrison, their security chief, supervised the installation of a variety of traps and snares around the perimeter of the property.

Randall and Roni, having not been brought into FOC, had pursued their own investigation that led them back to Cobb's Corners; reuniting with their old comrades (and joining the FOC expedition), they shared what information they'd encountered - that Blaine and Daphne Devine, the formerly-missing woman whose brain had been installed in Professor Harrold's body, had been in contact with a woman named Emelda Cratchett to acquire her husband's grandfather's diaries.

Once established (and confirming the local presence of metch kangmi when one apparently loses a leg to a bear trap), the team divides up, with Darren, Perry, Roni, the psychologist Drake and security chief Morrison patrolling the sugar maple forest behind the cabin; this was at Perry's suggestion, recalling the unsettling dreams he'd had the last time he was in Cobb's Corners.

Nick and Nathanlie, meanwhile, went into town to size up the local law enforcement and to investigate Darren and Perry's claims of creepy children.  Randall manned an impromptu watchtower atop the roof of the farmhouse. 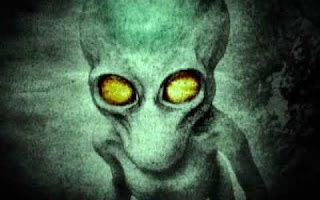 Darren, Perry and Roni soon realized that something was wrong with the forest, noticing small, mouthless humanoid figures, pinkish gray in color, watching them from the trees - the same as a creature Roni had seen near the outhouse weeks earlier.  Morrison shot one of the creatures out of the tree, sending the others scattering - and the one he shot sublimated into an ozone-scented smoke within the next few minutes.

Coming across a dilapidated cabin in a clearing, they noticed a piggish smell coming from the shack and a faint grunting, squealing sound.  Stealing as close as he dared, rifle at the ready, Perry tried to peer through the shack's single window.  As he did, a porcine head lifted up into view, peering back through tiny, jaundiced eyes.  Clawed hands grasping the window frame, the swine-thing heaved itself through the window towards Perry, but died quickly to a single shot from the Lee Enfield, dissipating into smoke as it did.  Squealing from the forest told them more of these creatures were on their way, and they quickly barricaded themselves inside the cabin.

Two more of the swine-things died quickly as they approached the window, but an enormous boar, half again as large as its fellows and sporting a pair of wickedly-curved tusks, circled around the other side of the cabin and began to batter against the door.  Ramming its huge, bony head through the rotten wood of the door, the creature began to break through - only to be knocked senseless by a bullet between the eyes from Perry.  The creature stumbled and fell backwards, its breathing wet and wheezy.  Darren decided to toss out a grenade to finish the creature off, judging the distance to throw the explosive to where it would damage the creature without damaging the cabin or themselves.  His aim was a little off, coupled with the rottenness of the wood, resulting in Darren getting a back full of splinters.

In the root cellar under the cabin, they found a catatonic little girl - and realized that the original swine-thing they'd encountered had been trying to get at her when they'd disturbed it.

[GM Aside: Personally, I really dislike mixing material from Lovecraft's "Dreamlands" stories into my Call of Cthulhu games.  I feel like the tones don't mesh at all and I'm just generally not a fan.  So when the campaign called for Zoogs, Men of Leng, and a Moon-Beast, I replaced them with "Dover Demons" and William Hope Hodgson's "Swine-Things" to suit my own preferences.]

Nick and Nathanlie, meanwhile, after assessing Sheriff Spenser as an authoritarian blowhard and Deputy Cutter as hiding something, go looking for Jason Haggerty, the teenage boy seen drawing "creepy trees" weeks earlier.  Talking their way past the school-marm, they managed to isolate the boy.  Nathanlie laid on the charm, leaning in seductively and using the boy's raging teenage hormones as a lever to pry loose information.

It worked, and they soon learned that most of the children in town were part of a group calling themselves "the Young," that Deputy Cutter was their leader (even though he was almost "too old") and that they would be summoning "Mother" to Earth in accordance with her wishes.

As Nick digested this information, Nathanlie opened her mouth and began to emit a strange, subsonic droning, putting the private eye in a hypnotic state and rewriting his memory to erase all evidence of what the boy had told them.

After having the girl checked out by Matherson and Drake back at base, Darren, Perry and Roni took her home to her parents, and then paid Emelda Cratchett a visit; she was at first irritated to hear reference to Blaine and Devine, blaming them for her husband's mysterious demise just days after he spoke with them.  They managed to talk their way into her good graces, however, and even managed to gain access to her husband's grandfather's journals.  From these they learned of legends of a cave network under Broken Hill, in which the Outer Ones lived.

Taking some time alone back at the base, Nathanlie mixed up a cocktail of heavy opiates and lemonade, distributing it to anyone in the base who would take a cup.  Darren, Perry and Roni returned to base and immediately sensed something off in Nick's explanation of what Jason Haggerty had said, their questioning making him begin to question his own memory. 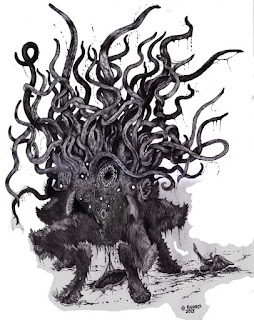 At this point, something big began to set off traps behind the farmhouse.  As they watched through the kitchen windows, a tree seemed to begin to uproot itself from the ground - or rather, to extract itself from the pit trap it had blundered into.  Towering twenty feet tall, the "tree" was a thick, cylindrical trunk of dense black jelly, pocked with drooling, sphincter-like mouths and patches of coarse, dark hair, balanced atop three digitigrade legs ending in cloven hooves.  Crowning this horror was a mass of squirming, greasy tendrils, four larger "trunks" emerging from the mass of smaller "branches." With a hooting bellow, the thing launched itself against the reinforced wall of the farmhouse.

Behind the group, Nathanlie planted herself firmly in the doorway out of the kitchen, the skin on the back of her neck splitting open as she began to molt out of "her" disguise - revealing the Outer One that had replaced her weeks earlier to observe and report on the Investigators.

The tree-like thing outside was too great for Roni's mind to handle, and in the darkness of the new moon she latched on to electric lighting as a safety blanket.  The sight of an Outer One emerging from Nathanlie like a five-foot cicada was more than Nick could comprehend.  Tommy gun in hand, all he could think was that if Nathanlie had been replaced, the rest of them must have been as well.

Perry managed to put a rifle bullet in the thing wearing Nathanlie's skin, but did not manage to kill the creature.  Squeezing the trigger, Nick swept the entire room with the submachine gun, emptying the thirty-round magazine.  Other than placing three bullets into the creature in Nathanlie's skin (finally killing it), the shots went high from the recoil of the gun, sparing the rest of the expedition.

As Nick stood there, breathing hard, barrel of the gun smoking, the tree-like thing outside burst through the wall, seizing him with two tentacles and pulling him into its bulk before retreating into the darkness of the night.
Posted by Bill at 6:44 AM