Some figures I finished between the end of the Painting Challenge and going into quarantine, these are "Count Casimir's Trans-Siberian Renegades" from Pulp Figures. 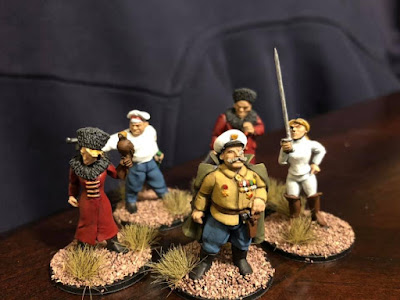 Front and center is the Count himself, flanked by his wife the Countess (red coat, fur hat and falcon) and his daughter Yolanda (in fencing gear).  Behind them is bodyguard Misha (white sweatshirt and sailor's cap) and lurking in the background is Secret Policeman Blotsky.

The red and white color scheme wasn't really intentional; white for Yolanda's fencing gear was obvious, and Blotsky's coat was done red because he reminded me of Telly Savalas' Cossack captain in the 1972 film HORROR EXPRESS.  It's well worth a watch (Christopher Lee and Peter Cushing are the main leads) and it's super weird seeing Telly Savalas with a cigar in his mouth instead of Kojak's usual lollipop.  Misha I had originally intended to have a striped sweatshirt but keeping the lines straight became such a headache that I finally gave up and gave him a solid-color shirt.

This bunch will hopefully be seeing some action on the table soon using Wiley Games' Fistful of Lead rules.
Posted by Bill at 3:10 PM 3 comments:

*blows off the dust*

It's bad enough how inconsistent I get at updating this blog during the annual Painting Challenge, but this year everything went south fast.  My partner was laid up for a month with a nasty infection and I did zero hobbying while serving as her nurse.  By the time my mojo was starting to come back and I was starting to paint again, COVID-19 hit and my mood and will to sit at the table and paint took another dive.  I'm starting to pull myself back out and will be trying to get some painting and solo wargaming up here soon.
Posted by Bill at 7:38 AM 3 comments: