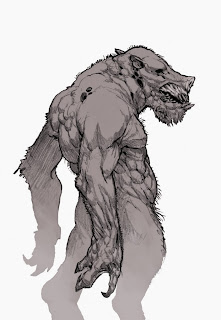 You know the way some geeks fan-boy out over Lovecraft? Lovecraft himself fan-boyed out of William Hope Hodgson, an early Weird Horror author whose life and career were cut tragically short in the trenches of the First World War.  I will admit that at this point, I kind of feel a bit jaded on Lovecraft's own work, having read and reread his stories so many times; but I still get the same Weird thrill from Hodgson that I no longer get from Lovecraft.  I'm sure time and familiarity will dull that thrill, but for now, man, Hodgson's the best.  Today's Cthuesday Creature comes from his 1908 novel The House on the Borderland, which Lovecraft admitted as an especial favorite.

Here's the description given in the novel:

Thus, I saw the thing more completely; but it was no pig—God alone knows what it was. It reminded me, vaguely, of the hideous Thing that had haunted the great arena. It had a grotesquely human mouth and jaw; but with no chin of which to speak. The nose was prolonged into a snout; thus it was that with the little eyes and queer ears, gave it such an extraordinarily swinelike appearance. Of forehead there was little, and the whole face was of an unwholesome white color.

For perhaps a minute, I stood looking at the thing with an ever growing feeling of disgust, and some fear. The mouth kept jabbering, inanely, and once emitted a half-swinish grunt. I think it was the eyes that attracted me the most; they seemed to glow, at times, with a horribly human intelligence, and kept flickering away from my face, over the details of the room, as though my stare disturbed it.

It appeared to be supporting itself by two clawlike hands upon the windowsill. These claws, unlike the face, were of a clayey brown hue, and bore an indistinct resemblance to human hands, in that they had four fingers and a thumb; though these were webbed up to the first joint, much as are a duck's. Nails it had also, but so long and powerful that they were more like the talons of an eagle than aught else.

The creatures are intelligent yet savage, human-like yet powerfully inhuman, and seemingly drawn to areas of instability in time and space.  The titular House of the novel sits on what appears to be a nexus point between our world and another dimension, a place called the Plain of Silence, ringed by mountains upon which strange, bestial faces are carved.  It is here that the narrator of the novel first encounters the Swine-Things, though they soon follow him back to our world, eventually collapsing much of the ground under and around the House into a vast sinkhole to entrap him.  The Malleus Monstrorum also suggests that these foul creatures could be encountered both in the Waking World and the Dreamlands - perhaps the Plain of Silence itself is part of the Dreamlands, bordering on the Vale of Pnath or the Plateau of Leng?

I'm not going to get too much into Dreamlands material here; if I wanted to run a Dreamlands game I'd probably use D&D or similar rules instead of Call of Cthulhu, to be honest, but it's also just not my style; I much prefer "realistic" horror games set in the real world to trying to run swashbuckling fantasy adventure in a world for which the players have no base of reference to ground themselves in.

Let's update the Swine-Things' stats from 6th to 7th edition before we go any further, shall we?

Spells: Normally none, but a Swine-Thing with an Intelligence of 85 or higher may know 1d4 spells. 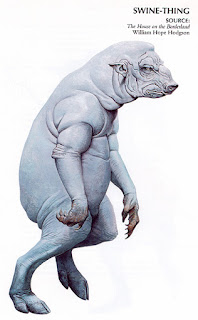 So what are we looking at here? Physically, the average Swine-Thing is a little bit bigger and a little bit stronger than the average human, but not outrageously so.  Their bodies are relatively soft and defenseless, with enough hit points to take a rifle bullet or two before falling, but not much more than that.  And they tend to arrive in groups, making them an ideal alternative to cultists for your Thompson-trigger-happy players.

The odds are very much against Swine-Thing knowing spells, but in the off chance they do, the Malleus Monstrorum suggests spells relating to Yog-Sothoth, Daoloth, Chaugnar Faugn or otherwise relating to movement through space and time.  These are very sound choices, given these creatures' connection with the membrane between worlds, if a little unimaginative.  At one point in the original novel, a Swine-Thing infects first the narrator's dog, then the narrator himself, with a luminous fungal infection - sure sounds like the spell "Green Decay" to me!

A couple ways of presenting these creatures in a scenario spring to my mind.  The first is as a sort of fourth-dimensional parasite; these creatures are drawn to and feed upon anything that disturbs the integrity of the barrier between dimensions, leeching off the energies released on both sides of that barrier.  This could take many forms; a Gate spell, sure, but also perhaps the summoning of a Dimensional Shambler or Hound of Tindalos.  An attempt to contact Yog-Sothoth could have disastrous side-effects as a horde of shuffling Swine-Things take up residence in the vicinity.  In such a situation, the Swine-Things would take on a similar "canary in the coal mine" role as the Tunnelers Below I examined last week; a good Cthulhu Mythos roll could identify the presence of these creatures as indicative of a time/space breach.

Of course, in such a situation there could be a "bigger, badder" horror lurking right around the corner; this should not devalue the Swine-Things as a menace by any means.  Remember, while the parasites dropped by the CLOVERFIELD monster couldn't push over buildings, they were a much more immediate threat to the cast of that film.  A manifestation of Yog-Sothoth might not ever notice the Investigators; the Swine-Things entering our world in its wake, though...!

The other option that presents itself is to focus on the near-humanity of the Swine-Things; suppose these are the human beings of another dimension.  The references to a Plain of Silence bring to mind Ramsey Campbell's short story "The Plain of Sound," inhabited by intelligences that in our reality manifest as sound-waves, but have form in their own dimension.  Perhaps the Swine-Things exist as disembodied intelligences or sentient sound-waves, or gases, or whatever in their reality, coterminous to our own, but when the barrier is breached and they enter our dimension, a dimension of matter, the piggish form is what their sound-waves or whatever translate to in matter.  Perhaps the investigators discover an old cabin where a reclusive scientist was working, accidentally broke open the barrier, and the Swine-Things emerged.  The scientist is dead, the Swine-Things are working to bring more of their kind through, and it's up to the investigators to piece together the scientist's notes and figure out a way to seal off the barrier and deal with the Swine-Things that are already here.

I think that's it for this week; I'm not sure where I'll go with the next installment, but I'll think of something.  I'm definitely open to suggestions as well.
Posted by Bill at 1:56 AM