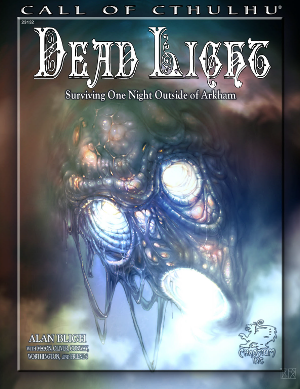 This past weekend was my home gaming convention, Running GAGG - put on by the Geneseo Area Gaming Group of SUNY Geneseo, my alma mater.  This year was the 19th annual Running GAGG, and I've attended almost every one since the 10th - I missed last year because I was moving my girlfriend from Maryland to New York that weekend, and I think I missed the 14th or 15th as well, but other than that I've hit every one, usually running at least one session of Call of Cthulhu.

Between work and some family stuff, I was only able to be at the convention on Friday night this year, and I'd decided to run the first 7th Edition CofC module released, "Dead Light," a survival-horror scenario taking place over the course of a single stormy night on the road between Arkham and...I think the module has it as Ipswitch, I might have done Aylesbury because I read over the module a time or two before running and then pretty much ran it from memory with a heavy mix of making it up as I went along.

I had five players, at least three of whom I'd run for at past Running GAGGs -- I'm not sure if Mike had played in my games before, but I knew the two Daves and Ben had both played in my con-games in the past.  Everyone was familiar with the game from 6th edition, and I walked them through character creation under the new 7th edition rules.  Our investigative party ended up consisting of:

On a stormswept night in late April, on the road from Arkham to Aylesbury, the party had to quickly slam on the brakes to avoid running over a pale, half-dressed young woman who stumbles into the road.  She's barely responsive except to mumble "the light," and "Granddad" over and over.  Recalling a diner and gas station up the road, they take her there to try and find out who she is and to get her a doctor.  One of them notices a flicker of silvery light, like the after-image of a lightning strike, out of the corner of their eye, but when they turn their head, see nothing.

The gas station is half-blocked by a still-running pick-up truck, its door hanging open.  Inside, they meet a grouchy, half-drunk farmer whose truck it is, and he mutters something about "you'd be in a hurry too if you saw the light."  He's resistant to saying anything more.

As for the girl, they find out she's Emilia Webb, the granddaughter of a retired local physician, Dr. Cornelius Webb.  She lives with him at his cottage up the road.  Forcing a little bit of whiskey and then coffee past her lips, they manage to revive her enough that she can tell of a break-in at her grandfather's house, two masked men forcing their way in.  She can't remember anything past that, however, and they decide to investigate the house.

They soon find that the power's out at the Webb house (the speakeasy owner and chauffeur working together manage to get it working again), and stumble across - literally - the scene of a horrible crime.  They find Cornelius Webb dead, apparently of blood loss from a gunshot wound.  They also find one of his attackers - or half of him, anyways, his lower half having been seemingly burned away.  The upper half was worse - every blood vessel in his body had burst as if the blood had boiled in his veins.  On the ground between them is an overturned casket, like a jewelry box of wrought iron, its edge sticky with black sealing wax.

They also find a series of strange, deep burn marks at about waist-height on a line of trees on the property.  The bootlegger notices a flicker of silvery light, like the after-image of a lightning strike, out of the corner of his eye, but when he turned his head, saw nothing.

They clean up the area as best they can and decide to get Emilia back to the house and asleep - they found some powerful sleeping pills and discharge papers from the Sandhill Institute for Girls, a high-end sanitarium, in her bedroom.

Once she's in the car again back at the diner, a lighting flash reveals a figure standing on the edge of the road.  The bootlegger and speakeasy owner (I think...it was a late night game) investigate the figure and find he's the second masked assailant, now out of his mind and babbling about "the light."  They quickly subdue him, tie him up and shove him in the trunk of the car, then take him and move him to the basement of the Webb house for interrogation.

Emilia drugged and asleep and the masked man too insane to give sensible answers, they decide to leave him tied up in the basement and catch a few winks of sleep themselves.  They're awoken by screams coming from the basement, and discover a silvery light, flowing like liquid, pouring in through a hole in a ground-level window into the basement, coiling around the masked man and burning its way into him.  Soon it's inside him, burning its way out, pouring, syrup-like, from his mouth and eye sockets as his flesh collapses into fine, white ash.

In a panic, the bootlegger fires three shots from his shotgun at the light, and while it seems to flinch back from the flash of gunpowder going off, the shots themselves do nothing.  The party runs upstairs and barricades the basement door behind them.

The jazz musician starts trying to wake up Emilia and get her out, while the bootlegger and speakeasy owner tear through Webb's study and bedroom looking for information on this strange light.  They manage to find a diary in which only a few pages are written; a brief history of the light as a "sin eater," passed down from physician to physician in Arkham since the 1600s, used to quietly dispose of stillborn children, especially those born out of wedlock or deformed.  There's also a page of dates, initials, and fees paid that sends a brief shiver down the speakeasy owner's spine as he realizes that these are dates and fees paid for the sin-eating light's service.

They do however find phonetic instructions of how to talk the light back into its casket.  They run back in the room just as the chauffeur, holding the casket out to try and catch the light in it, is consumed as the light burns through the basement door and flows over him.

They say the words and the light coils its way back into the casket.  Sealing it shut, come morning (and the end of the storm), they take it out into the deepest part of the woods and bury it, along with the remains of the half-eaten burglar and Dr. Webb.  They leave Emilia asleep and get back on the road to Aylesbury.

The session went really well I thought, especially since it was way past my bedtime these days when we began play.  Everyone had a good time and I got to hand out a bunch of custom D6s I'd had printed up by Chessex with Elder Signs in place of the "1"

I also got to talk to Meghan of Chaosium who was there working a booth and got to express my love of Call of Cthulhu directly to a representative of the company that makes it and asked her about if there was still any support for Chaosium's old "Cthulhu Cultist" GM program, because I'd love to have the company's blessing to do outreach for my favorite RPG and spread the love at conventions.  There's a lot of small college gaming conventions in my area because every local college has their own gaming club and their own convention, so it's a fairly easy thing for me to go around to Simcon, UBCon, etc and run games.  I mean, I'm probably going to do that anyways, but I'd love to have Chaosium catalogs or something I can give to players at the end of sessions.
Posted by Bill at 7:11 AM No comments: