The Kroglogg Delegates Have Arrived

I've been slowly puttering away at the figures I got from Lead Adventure Miniatures' first Astropolis Kickstarter, and have finally finished two of them; the hammerheaded aliens known as "Krogloggs." The Astropolis II Kickstarter, which I was foolish enough not to back, added a number of additional Kroglogg packs to the line, some of which are hopefully on their way to me right now.  These two were the figures that enticed me to back the Kickstarter in the first place, as I loved how much character had been packed into what are genuinely simple sculpts. 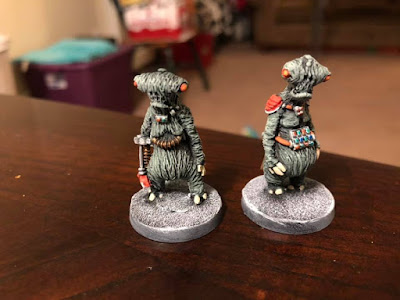 Looking at them, I felt like the texture on their skin could be interpreted as either fur or just elephant-like wrinkles, and I opted to treat them as the latter.  Over a black undercoat I dryrbushed Reaper "Highland Moss," followed by a lighter drybrush of "Pale Lichen" going a little heavier on the high point of the round belly, the tail, and the details of the face on each figure.

The metallic gear they're wearing was picked out in "True Silver" and "Coppery Orange," with cables being detailed in "Carrottop Orange" highlighted with, well, "Highlight Orange." The shoulder-pads on the one and the mechanical claw on the other were done in "Fresh Blood" highlighted with "Phoenix Red," which was also used to basecoat their eyes (and then highlighted with "Fire Orange" for the pupils).  Finally I picked out the claws and hooves in "Stained Ivory" and the buttons on their gear using GW Technical paints - "Waystone Green," "Soulstone Blue," and "Spiritstone Red." The coppery tubes were washed with GW "Nuln Oil" to bring the shine down a bit. 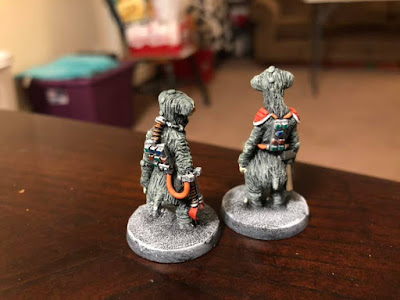 Their bases were done using baking soda - I applied superglue over the bases prior to priming, and sprinkled baking soda over that for a finer grain texture.  The baking soda and super glue react to cause the glue to harden instantly.  After priming black, the bases were drybrushed with Reaper "Cloudy Gray" and "Misty Gray."

I'm very happy with how these came out, and once I have a few more I'm hoping to field a Kroglogg hunting party in skirmish games like Rogue Stars or Galactic Heroes - the latter being a game I was made aware of by Thomas Foss' post regarding his Krogloggs over at Skull and Crown.
Posted by Bill at 8:05 AM 1 comment:

I've been neglectful of this blog again - granted, I've been wildly inconsistent in the time I've been spending picking up a brush! It doesn't help that it's been ungodly hot here lately, that's for sure, but I have accomplished a bit. 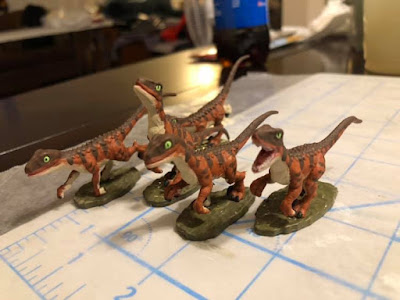 I did get a set of five Raptor-style dinosaurs from Reaper's Bones 4 Kickstarter painted, in a color scheme I'm really happy with - the underbellies are basecoated in Yellowed Bone and highlighted with Creamy Ivory, the flanks are Auburn Shadow highlighted with Carrot-Top Red, and the dorsal surface and stripes Dark Skin highlighted with Dark Highlights.  The open mouths are Dusty Rose Pink highlighted with Blush Pink, and the eyes are Vallejo Livery Green. 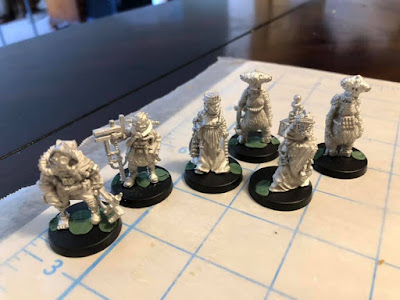 I'm backing Crooked Dice Games' Colony 87 Kickstarter, and that reminded me that I have some figures from Lead Adventure Miniatures' first Astropolis Kickstarter still sitting in my lead-pile.  I got those cleaned up and glued to their slotta-bases and puttied over the edges of the slots.  Maybe it's just because these were early casts in the molds' lives, but these figures required almost no clean-up, which is remarkable considering how much detail they're covered in.  I was so impressed I ordered another five packs this afternoon.  These have had their bases textured and are in the priming box right now. 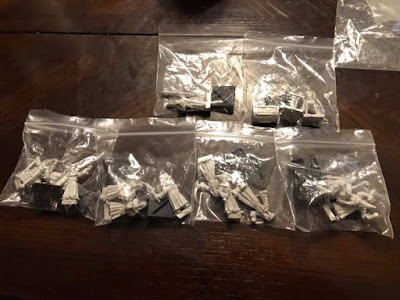 And finally, I had backed Dark Fable's most recent Kickstarter and got myself a baker's dozen of fabulously sinister cultists, as well as a pack of cult treasures which will make phenomenal treasure markers in Frostgrave or similar games.  I haven't begun cleaning or basing them yet.
Posted by Bill at 2:00 PM 1 comment: