I'm so very proud of this regiment.  This is the first finished unit for my Warhammer Ancients army, a block of 24 Livonian Swordbrethren that I'll be fielding as Allied Crusaders in my Ordenstaat force. 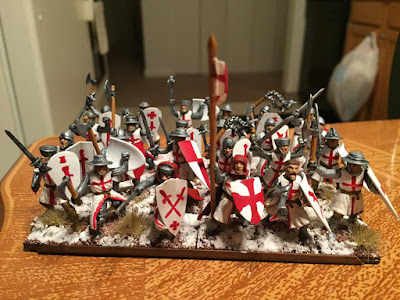 The Livonian Order began life as a separate militant order, before being absorbed into the Teutonic Order as an autonomous sub-order following a disastrous defeat in 1232. 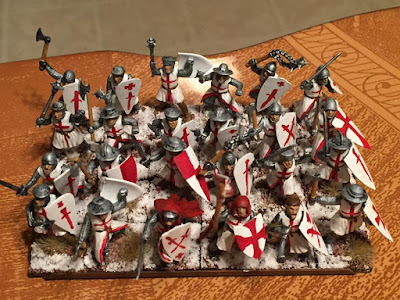 I'm especially proud of these as this is the first block of rank and file troops I've painted since I was back in high school, at least 13, maybe 14 years ago now.  Back then I was fascinated by Warhammer Fantasy, but could never afford to build an army, so I bought units here and there, managing to paint a unit of Skeletons, two units of Chaos Warriors, two units of Orcs and a unit of Night Goblins at one point or another.  At the time, a 20-man regiment of Skeletons was the biggest I ever did, and now I've surpassed that, with 24 Livonians standing proudly now as my personal best in terms of unit size and a return to rank and file I've been craving.  Plus, back in high school I never would have had the nerve to attempt to hand-paint heraldry like this. 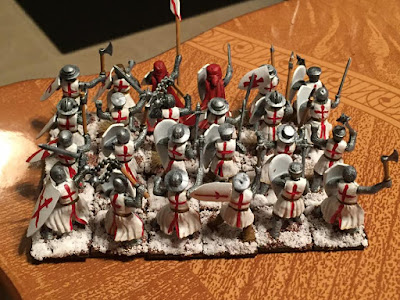 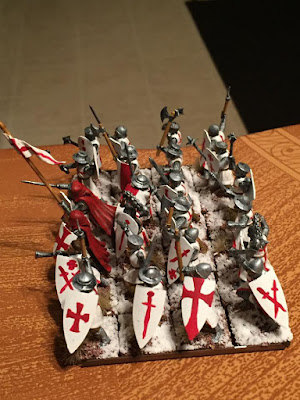 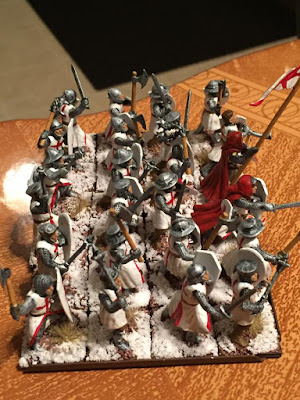 Progress on my WAB Teutons

I've been puttering away at my army for Warhammer Ancient Battles; I'm going very cavalry-heavy at first, which will put me at a disadvantage against anyone fielding a Phalanx-y army, but it's a good starting place.  I've got everything I need for my first 2800 points, I just need to assemble the last regiment of mounted Brother Knights and then get everything painted.

Yesterday was a real good mail day today, and I was able to finish assembling my last unit of infantry - a regiment of Brother Knights on foot with hand weapons and shields.  In a 2800 point game it will be a 13-man unit, in a 3000 point game it'll be 15. 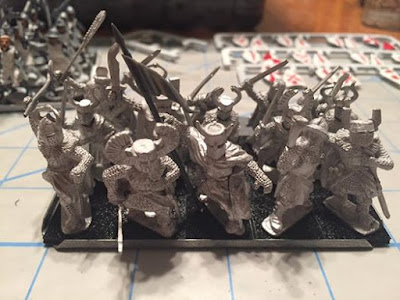 The regiment is a mixture of Gripping Beast metal figures and Crusader miniatures - it would have been all Crusader figures, but they didn't offer a foot command blister, hence the mix, which resulted in two visibly different groups of knights in regards height and bulk.  The Gripping Beast figures are much bigger, closer to 32mm I suspect; I packed the front rank with them to disguise the disparity on the table. The standard held up by the standard bearer is a 6cm lance from Fireforge and a banner off the Fireforge Teutonic Knights sprue.

I've also gotten some good progress done on a regiment of allied Livonian Swordbrothers; historically, the Livonian Order was subsumed into and became an independent order within the Teutonic Order.  Since I can't have more than half my list as Brother Knights, I had to fill out the list with Allied Crusaders, and I've opted to paint my Allied Crusaders as Livonians.  These were assembled from the Fireforge Teutonic Infantry box, with a few weapons taken from the Teutonic Knights sprues. 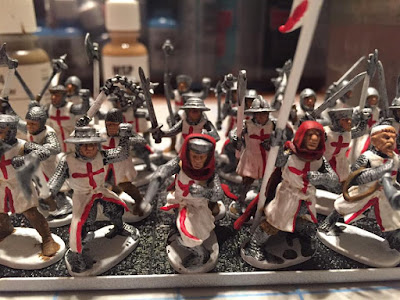 All that's left are the bases, belts, and hafts of various axes and maces; the shields have all been painted and are just waiting to be glued into place.

While these are being painted with Warhammer Ancient Battles in mind, I'm expected them to also see use in Lion and Dragon Rampant at some point.
Posted by Bill at 3:47 PM No comments:

Ian of The Blog With No Name runs a Secret Santa program every year for the miniatures painting blogosphere, and this year I got in on the fun.  I Santa'd for Koen at Ramblings of an insane mind, and after some delay due to back-orders, received my gift from Thomas, whose blog I don't think I know. 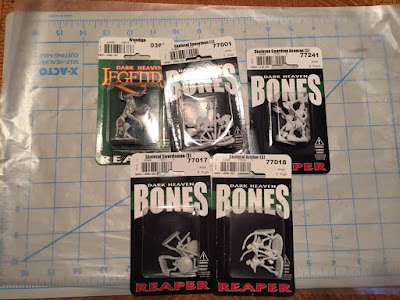 Thomas sent me four packs of Reaper Bones skeletons - one each of three spearmen, archers, swordsmen, and axe-wielding guardians.  As if a dozen bone-rattling undead wasn't enough, Thomas went the extra mile and threw in a Wendigo, a creature perhaps tied with Manticores as my favorite mythological monster.

I suppose I should share what I've painted thus far for the painting challenge here as well, hmm?

I will link you to the posts on the AHPC blog:

The Cult of Set.

I sent in my entry for the first of the bonus rounds, "Armour," today, so that'll go up tomorrow.

Here's a sneak peek at what I'll be working on for the remainder of the Challenge, I think. 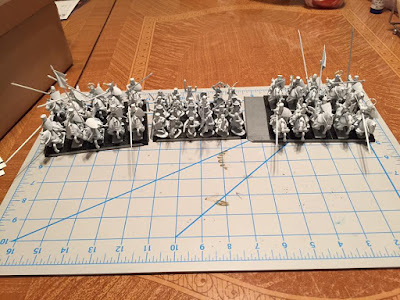