Cultists of the Vampire, and Getting a Game In

The second unit of my Vampire Countess warband for Dragon Rampant is complete.  A band of fanatical cultists, dressed in blood-red robes and hoods and armed with an assortment of rusty blades, serving the Countess Winterthorn in the hopes of being gifted with eternal life.  In game terms, they're a unit of Bellicose Foot, quick on the charge but a little fragile in sustained fights.  They're made from North Star's excellent "Frostgrave Cultists" plastic set. 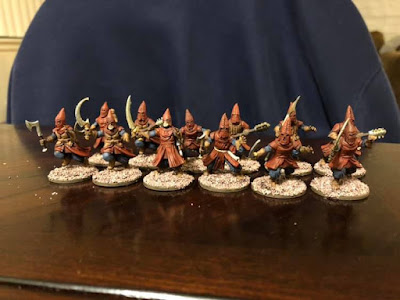 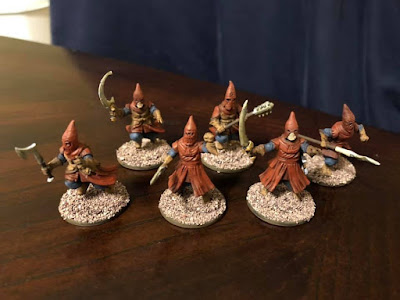 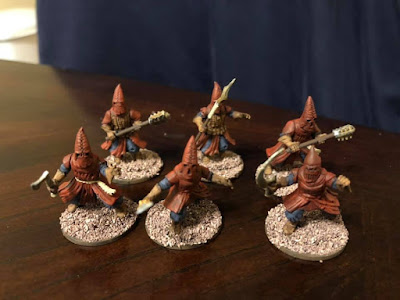 In other news, I actually got my first game of Dragon Rampant in last week.  I threw together a 30-point list using my old Age of Sigmar Chaos figures and some Reaper demons I'd painted up:

And brought them to Just Games' new location, which had just opened that day - two doors down from the old location and twice the space for gaming.  Neil brought his Moonclan Grots (Age of Sigmar's renaming of Night Goblins). 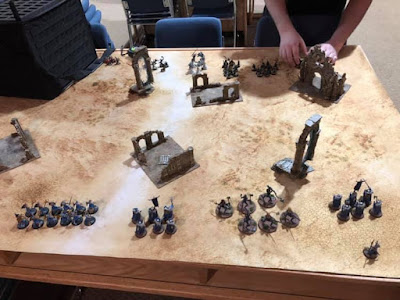 We had a great game, our two armies converging on a plain dotted with ruined buildings.  Since we were both playing the game for the first time, we skipped on playing a scenario and just did a straight-up death match.  Though his Squig Knights and Fanatics polished off my Khairic Acolytes and I lost a few Chaos Warriors and Bakarathi along the way, ultimately the goblins were reduced to a single unit of archers fleeing for safety.


I'm definitely looking forward to playing a scenario next time.  This list is going to need some tweaking - I'm going to put the "Undead - No Feelings" special rule on the Bakarathi to keep them from failing courage checks, for example.
Posted by Bill at 4:14 PM No comments:

What I've been up to

I haven't meant to ignore this blog, honest! I just haven't been painting much lately.  I got commissioned to write a 25,000 word Call of Cthulhu scenario set in Victorian London, and trying to get that finished up before deadline has been taking up most of my free time.  I'm still something like 11,000 words away from my goal...

I do have an upcoming game of Dragon Rampant this week, pitting my old ("old") Age of Sigmar Chaos forces against my friend Neil's Night Goblins.  Work is continuing on my "Vampire Countess" Dragon Rampant warband, as detailed in my last post, but I really just wanted to get a game in and realized I could do so with repurposed AoS figures for the time being. 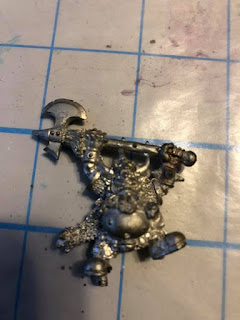 There's also plans on the horizon for an Oldhammer-inspired goblin force.  I've used eBay this week to pick up a few figures I always wanted when I was just starting out as a wargamer/miniatures painter back in 2000-2001, and from reading various blogs I've really kind of fallen in love with the Oldhammer aesthetic and more than anything, Kev Adams' orc and goblin sculpts, so expect to see me make a big purchase from Warmonger Miniatures in the near future.  I have some coming shortly from a Kickstarter that Black Tree Design ran recently as well.  I'm especially planning on converting a snazzy new chariot for the vintage Grom the Paunch, Goblin Warlord figure I grabbed.

That's about it for what's going on for me right now.  I'm hoping to get more gaming and painting in once I finish writing this big Victorian scenario.  Speaking of which, I better get on that.
Posted by Bill at 3:28 PM No comments: