Monthly Madness: The Devil is in the Details, Part 1

Saturday night I ran a one-shot at Just Games, a scenario penned by Oscar Rios for Chaosium's now-defunct monograph line.  We actually didn't quite finish the scenario, so we'll be reconvening sometime soon to finish the adventure.  Two players were not only new to my table, but new to Call of Cthulhu entirely, and I'm pleased to report they had a great time.


Accompanying them, as NPCs:

Employees of Wallace's Antiques & Collectibles (with the Professor and Mahira being newly-hired consultants), they've been sent on a week-long "working vacation" to Birch Springs, a little summer getaway town in the Catskills.  Here, they're staying at the Davidson estate, a Victorian-style summer home that's been sitting empty for five years until Fred Wallace bought the place cheap, fully furnished, hoping to turn a profit on the contents - the Davidson's were known as collectors of exotic goods from around the world, especially the Near East.  Wallace would be supervising their efforts to catalog and appraise the contents of the house, and their meals would be provided by a hired cook.  If it wasn't February, it'd be a wonderful week.

Upon arriving, they discovered that Wallace had brought a "niece" with him, the sort that's young, fashionable, and only comes to visit when Mrs. Wallace is away.  After lunch, they get to work; Dr. Ramsey soon discovers evidence of a secret door in the library, while Malcolm notices a concrete obelisk 300 yards from the house, half-hidden in the trees at the edge of the property.  Examination of the obelisk reveals it to be of recent construction, covered in a mixture of Arabic writing and Egyptian hieroglyphics.  Dr. Ramsey and Mahira confirm that the carvings on this obelisk make up about one-fifth of a binding or protective spell; they suspect four more such pillars must exist around the property to comprise the rest of the spell.  They don't manage to open the secret door, and the rest of the day passes uneventfully. 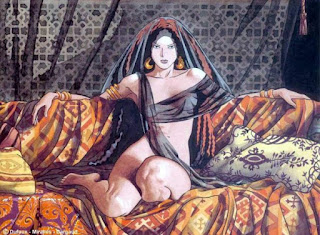 During the night, Malcolm is awoken by the sound of tiny bells and the smell of honey and sandalwood.  Opening his eyes, he sees a beautiful Arabic woman, dressed in veils and not much else, standing near the foot of his bed.  She beckons to him, and then disappears when he declines.  The smell of honey and sandalwood lingers for about ten minutes after she vanishes.

The next day begins with "Kitten," Wallace's girlfriend, skipping breakfast to sleep in.  A few hour later, Irma, the cook's daughter, goes missing, and Wallace finds a note from "Kitten" explaining she'd left for New York, having had Irma drive her to Birch Springs.  Irma, it turns out, does not have a license and even if she did, the mountain roads and drifting snow would make for a dangerous drive.

Lois eventually finds the key to the secret door, in a lock box under a loose floorboard in the master bedroom.  Alongside it are a .32 revolver, a box of bullets, a stack of nude photos, a roll of $20 bills and a battered notebook.

Reading the notebook, they learn that Reggie Davidson, the last resident of the house, tried to summon something, using a spell found in Arabic scrolls, to avenge himself on the lawyers and creditors that hounded him.  Something went wrong, however, and whatever he summoned attacked him, ultimately being responsible for his death in 1923.  Whatever it is is still in the house...as they come to this realization, the power goes out.

Investigating the generator, they discover the handyman half-decapitated and the gasoline cans emptied down a drain.  Racing upstairs to check with Wallace, they barely have time to tell him what they saw before a purplish cloud wells up behind him, manifesting a series of barbed tentacles.  Wallace is dead before he hits the ground, and the investigators take off running for the secret room.  Terrified beyond the capacity for rational thought at the sight of this thing, Malcolm took off running outside, into the deepening snow.

[GM's Note: I goofed here.  Wallace was supposed to die before the power went out.]

Locking themselves into the secret room, they surveyed the interior; shelves of jars and vials contained various liquids and powders, bookcases overflowing with occult texts, some sort of chemistry set, a case of scrolls and a workbench.  Dr. Ramsey and Mahira began investigating the scrolls, finding them to be a remarkably intact Arabic copy of the Al Azif, a book better known by its Greek translation - the Necronomicon! Sherman and Lois began poring over a notebook on the workbench, finding it to be Reggie's translation of certain scrolls within the Al Azif.  Cross-referencing them, Dr. Ramsey quickly confirms Reggie's translations to be seriously flawed, and that instead of the harmless "mist spirit" he'd tried to summon as a test of his skills, he called up instead a very dangerous entity known as a Jinniyah.

Malcolm, returning to his senses, reentered the house, realizing the snow was falling too fast and piling up too deep to safely make it back to town.  Joining the other investigators, he began examining some of the occult texts with Paul, discovering some more information on the Jinniyah - including how it could be bound within an enchanted glass bottle.  Using this information, Dr. Ramsey was able to find the spells to create such a bottle, and summon a Jinniyah into it, within the Al Azif.

As they began discussing the possibility of casting these spells, a purple smoke began to seep into the room, forming itself into a beautiful Arabic woman.  She bowed slightly, and said in Arabic, "I have been listening to you for the past several hours as you've researched.  We can do this the simple way, or the difficult way."

Dr. Ramsey urged Lois, Mahira and Sherman to begin gathering the ingredients to make the ink, and began trying to question the Jinniyah to buy them time.  She simply shook her head and repeated her question.

And then Malcolm, .32 revolver in hand, fired three shots at her in quick succession.

This is where we had to leave off for the night, as the store was closing and we had to clear out.  We're working on figuring out another time to reconvene and finish off the scenario.
Posted by Bill at 2:36 AM