Back of Beyond: "Keys to Shambhala" 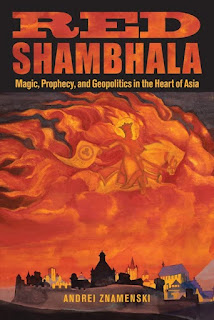 I've been reading Andrei Znamenski's 2011 book "Red Shambhala: Magic, Prophecy and Geopolitics in the Heart of Asia" this week. Exploring Bolshevik efforts in the 1920s to exploit apocalyptic Buddhist prophecies to sway Mongolia and Tibet towards Marxism-Leninism, it's ripe for being turned into a Pulpy "Back of Beyond" skirmish game. And so, going through the figures I've got painted (and painting one to finish things off), I prepped a game for this holiday weekend. I need to get some more White Russians and Warlord Chinese painted at some point in the near future to expand these games some as well.

Honestly, some of the personalities operating in Central Asia during this period are more colorful than would be believable in fiction, which is just wonderful for gaming purposes; I've been a big fan of Roy Chapman Andrews, the American paleontologist who retrieved the first known dinosaur eggs from Mongolia in this period (and who was one of the models for Indiana Jones), for many years now, and he's almost bland by comparison to the likes of Baron Roman von Ungern-Sternberg, Frank "One-Armed" Sutton, Colonel Frederick M. Bailey, and Cheka agent, cryptographer and paranormal investigator Gleb Bokii.

Bokii's efforts to organize a scientific expedition to locate the legendary kingdom of Shambhala and convince the Ascended Masters therein to turn their occult superscience towards the Bolshevik cause was the inspiration for today's game. I didn't have any figures scrawny and weaselly enough to pass for Bokii, so I used a figure from Pulp Figures' recent "Arcane Academics" Kickstarter as a fictionalized stand-in: Dr. Sergei Kolchak - revolutionary spy, agent provocateur and occult investigator. His grandson would continue the family tradition of exploring the paranormal, fifty years later in the 1970s.

Setup: 1924, Southern Mongolia. Dr. Sergei Kolchak, head of a secret occult investigation unit within the Soviet Secret Police, has become obsessed with legends of the hidden kingdom of Shambhala in Central Asia; he seeks to meld Leninist-pattern communism with Tantric Buddhist teachings to produce a stronger, more spiritually-pure version of Communist ideology. The monks of the Emerald Monastery, he believes, hold the secret to Shambhala’s location. He’s had the monastery shelled to convince the monks to surrender, and now, under cover of darkness, leads a team into the ruins to collect the monks. However, a team of American expat mercenaries, all veterans of the Polar Bear Operation in 1918, are on hand to protect the monks. 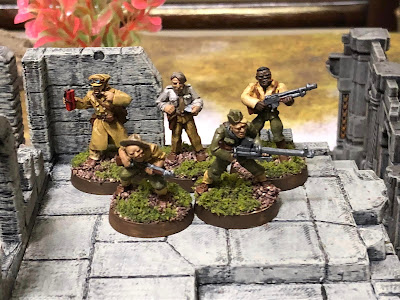 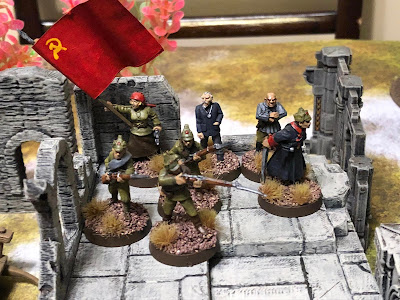 The Bolsheviks deployed at the northern table edge, while Cappy and Sgt. Piney deployed in the ruined monastery at the center of the table with the four monks; the remainder of the Mercenaries began play off-table, arriving at the table edge upon their turn in the initiative order. Night has fallen, reducing all weapons to an effective range of 12" and giving everyone a -1 modifier to Shooting attacks. The scenario is basically "Caught in a Tight Spot" out of the Fistful of Lead: Wasteland Warriors book. I randomized the table edges that the remaining Mercenaries arrived at though. 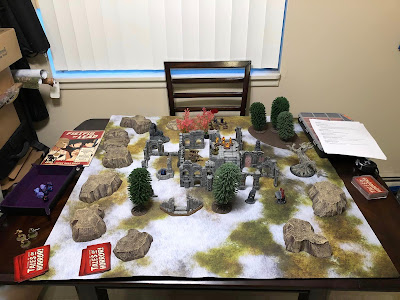 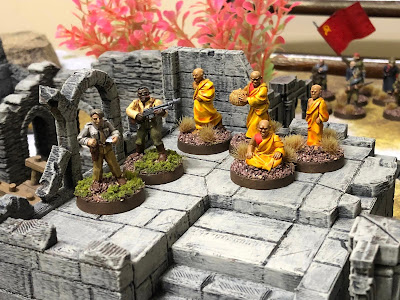 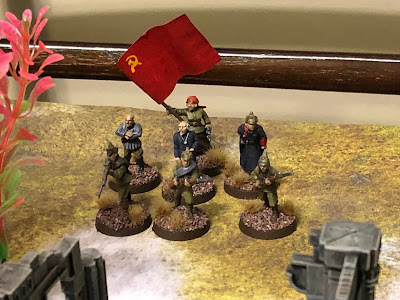 Kolchak moved into cover and took a long shot at General Cappy Boyd and missed; Boyd returned fire, putting a Shock token on Kolchak. Sgt. Piney opened up on the group of Bolsheviks with full auto fire, putting one grunt Out of Action, wounding Commissar Ivanov and putting a Shock token on Dragovitch, while going Out of Ammo himself in the process. 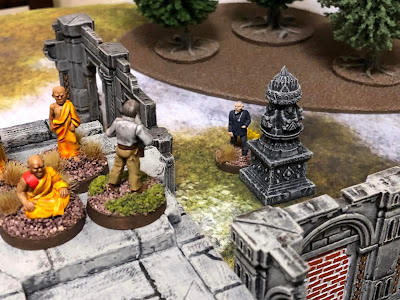 The game quickly turned into a swirl of shooting and close combat as the Bolsheviks attempted to rally and storm the fortified position Boyd and Piney were holding and Junior, Zeb and Boomer entered the field from three different table edges. And, I'll be honest - I got three hours of sleep last night, and I've been up for nineteen hours as of when I'm writing this, and I'm pretty sure I forgot to update the turn counter a couple times. So what happened when is a little hazy today. Instead of the full play-by-play, here's some highlights: 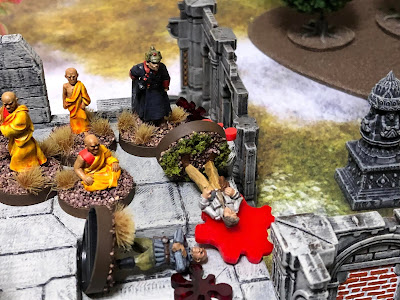 So a victory for the Mercenaries, but a costly one, with only two figures left on the board. I think the monastery may have ended up over-fortified; the Bolsheviks had a very hard time even getting close to the monks, and didn't manage to even shift any of them off the platform; I think having the monks on the raised platform was probably a mistake in hindsight; Piney and Boyd were able to shoot down at the approaching Bolsheviks as they approached pretty handily, and the attackers had to circle around the platform to reach the stairs if they didn't feel like climbing a sheer building side while being shot at. Still, the Bolsheviks gave a pretty good showing for themselves, even if they didn't win.