Two more squads of figures done this month; the first, my second set of five GI Joes; Flint, Lady Jaye, Snake Eyes (and am I the only one who thinks it's weird that the ninja named "Snake Eyes" *isn't* affiliated with Cobra?), Breaker and Covergirl. 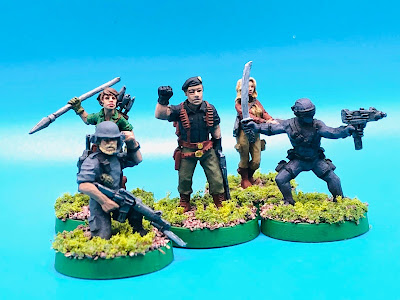 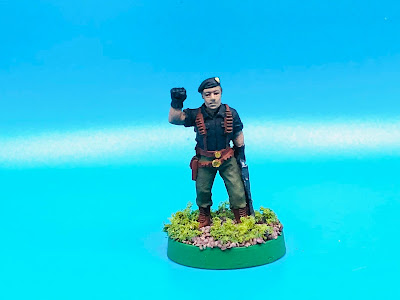 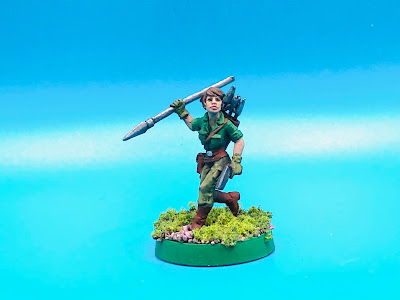 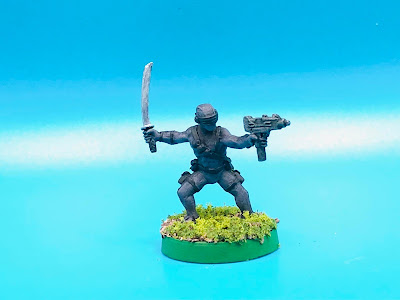 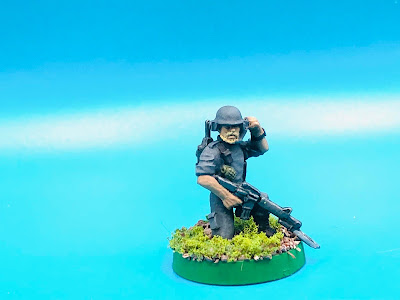 The second is a group of Brits for Pulp games set in the 1920s and 1930s. I just finished Peter Hopkirk's book "Setting the East Ablaze," about Lenin's efforts to foment a Communist revolution in Asia, and came across a brief reference that British spies often traveled under the guise of a hunting party; I've had these figures - a mix of Copplestone Castings' British Army in Tropical Kit and Pulp Figures' "Sons of Empire" set - in storage for a while now, dug them out and got them painted up. 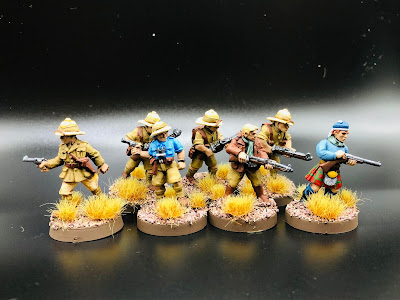 I've had some vague ideas about skirmish gaming in the "Back of Beyond" - Central Asia in the 1920s and 1930s, at the intersection of the Russian Civil War and China's Warlord Period. It's been floating in the back of my head for years and I'm finally getting figures painted for it; honestly I think I'd play it like an Indiana Jones movie in terms of pulpiness and supernatural elements.

I had some more figures primed and ready to go this week, and some of them promised to paint up quick with fairly restrained color schemes, so I dove in over the weekend and got them knocked out quickly and to a standard I'm happy with.

These will all be showing up sooner or later in pulpy games of Fistful of Lead.

Tales of Horror: An American Werewolf in Drumheller

I squeezed in an evening game of Fistful of Lead: Tales of Horror this past Wednesday using my recently-painted Canadians and some werewolves I painted last October. 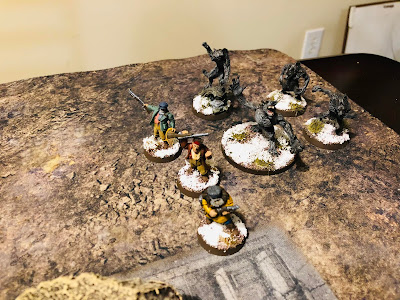 I mostly ran this as the "Under the Blood Moon" scenario out of the Tales of Horror book; Frenchie, Sgt. McMichaels and the Mounties were holed up in an isolated cabin in the hills outside Drumheller, Alberta, and needed to survive the werewolves A) long enough for Lefty and Jack to arrive with the silver bullets, and then B) survive until the sun rose at the end of Turn 7.

The werewolves moved cautiously around the cabin for the first two turns after Brutus got a Shock token on Turn 1. Lefty and Jack arrived at the beginning of Turn 3, right as the werewolves were starting to move in and really attack. Lefty shot at Brutus as the giant werewolf savaged one of the Mounties, but was attacked in turn by Cassius. 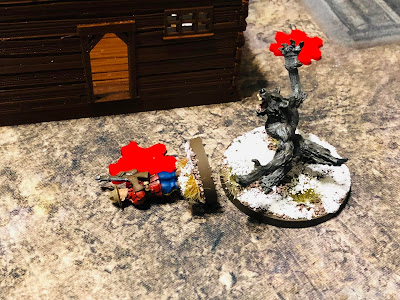 Casca and Cinna attacked the cabin, with Cinna smashing in the window to attack the nearest Mountie - only to get knocked flat with a rifle butt. McMasters and Frenchie opened fire on Casca, driving the werewolf backwards but not harming him.

Jack drove off Cassius, and Brutus slunk away, deciding to abandon this pack and form a new one next month. He left the table. Ultimately Lefty spent the rest of the game crawling across the table towards the cabin, his wound never allowing him to stand up. Jack shot both Cassius and Casca with silver bullets, finishing them off. The Mountie that bashed Cinna got shot through the window and killed by one of the Mad Trappers. Frenchie and McMasters finished off the Mad Trappers, though McMasters was killed in the process.

The game ended with the Hunters with 5 Renown Points and the Werewolf Pack with 2 Renown Points, a solid win for the Hunters. Though Lefty was bitten by a werewolf and survived, so who knows what the next full moon holds for him...

This bunch actually went surprisingly quickly - first pic is four of the five figures in the "Northland Adventurers" pack, second pick is four of the five "Scarlet Patrol," and the last pic is three of the four "Mad Trappers of Rat River," all from the "Yukon Peril" line over at Pulp Figures. These will all see use in various "Fistful of Lead" games - starting with a "An American Werewolf in Saskatchewan" game of Tales of Horror I've got planned for myself. 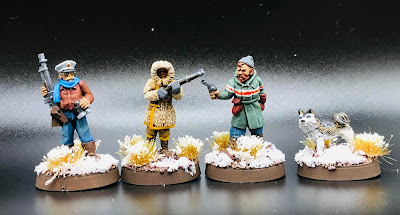 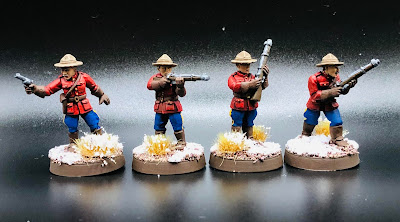 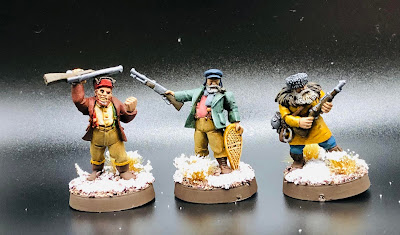 Not Much to Report

My painting has, unfortunately, slowed down dramatically since January. Depression has been kicking my ass, sad to say, and just all around haven't been able to carve out both the time and energy to make it to the painting desk. I did manage to eke out these vampire women from Reaper's Bones 5 Kickstarter, part of the "Shadows of Ravenholme" expansion. 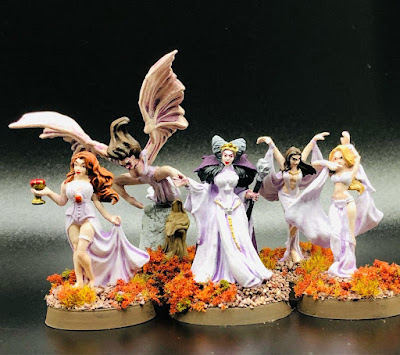 Continuing on with my 28mm GI Joe project, here are the first five members of the Joes proper: Duke, Scarlett, Rock-n-Roll, Shipwreck and Lifeline. 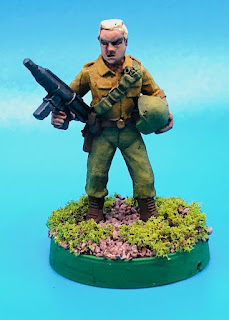 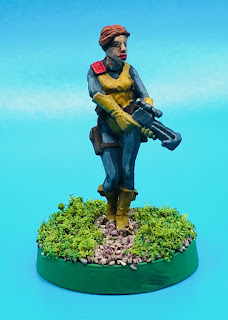 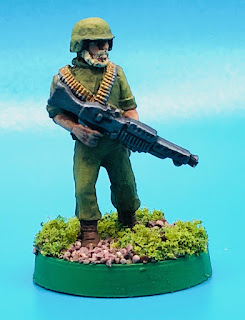 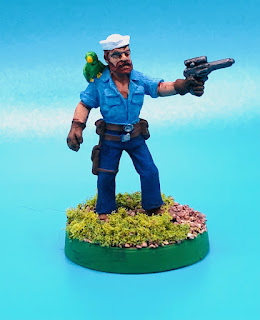 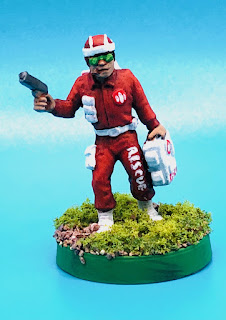 All in all, a solid bunch to paint with plenty of variety, and great practice with the light box as well. Looking forward to getting them on the table for Fistful of Lead.

So I've been kicking around a project for a bit. I want to challenge myself, and an idea I hit on is to assemble and paint everything I would need to put on a big, flashy convention wargame demo. That means all the figures, terrain, and put together a scenario that could handle up to six players.

For me, the obvious choice was to use Wiley Games' Fistful of Lead.  There's no ruleset I like better or want to see more people playing than that. But what to do with that ruleset?

The idea I hit on was a GI Joe game, with squads of Joes squaring off against gangs of Cobra troopers. Get a couple vehicles on the table, and it'll all be very eye-catching with (for gamers of a certain age) familiar characters on the table.

Funnily enough, I'm not a gamer of a certain age - being born in 1987, I missed out on GI Joe, He-Man etc., during their peak; I remember Christmas 1992 was a GI Joe-heavy one (including the very big electronic GI Joe base released that year), though, and my wife and I became fans of the Sunbow animated series from the 1980s a few years back through Netflix (though she loses interest as soon as Sgt. Slaughter gets introduced to the show).

I've got a couple pieces of MDF terrain from Sarissa Precision so far to build (a guard-house, a helicopter pad and a radar station) that I think will come into play, and leads on 3D-printable Joe and Cobra vehicles. I've sourced some figures as well, and painted my first gang for proof of concept - the Cobra-affiliated militarized biker gang known as the Dreadnoks, and their sinister leader Zartan.