Wasteland Warriors: Into the Zone

So this AAR isn't Fistful of Lead's "Wasteland Warriors" proper, but more like "Fistful of Zona Alfa." I like the localized apocalypse of Osprey Games' Zona Alfa and its inspirational media (Roadside Picnic, etc), but mechanically, Fistful of Lead is much more my speed. So instead of going full Kamandi, this game is a little more subdued; as such, scavenge points and the Wasteland Warriors rule of "once you go out of ammo, that's it" aren't in play.

15 years ago, an extraterrestrial encounter - a "roadside picnic," the equivalent of a representative of an unimaginably advanced civilization stopping on earth long enough to change a flat and smoke a cigarette - resulted in the creation of the New Mexico Exclusion Zone in the American Southwest. The "Zone" is a place where the normal laws of physics are only loosely enforced, and entrance into the Zone is illegal; nonetheless, the Zone is home to no shortage of bandits, refugees and exiles. Long-term exposure to the Zone results in madness and mutation; many of the Zone's residents could be classified as prehuman, abhuman or posthuman - scientists disagree, but there's speculation that some of these things arrived in the Zone via time- or dimensional portals from somewhere entirely alien.

From the ravings of an escapee from the Zone, President-for-Life Travolta has learned that an extant copy of Polybius, an arcade game designed as a CIA psyop in the 1980s, might still exist in the camp of a sociopathic bandit gang called the Junkyard Dawgs. Intrigued and eager to lay hands on such a game, President Travolta has authorized a fireteam of private military contractors to enter the Zone and retrieve Polybius' hard drive.

The Dawgs started the game deployed in cover around the table, with the PMCs beginning play clustered at one table edge. To make things interesting, once models begin taking injuries, they run the risk of attracting wandering threats from the Zone. As long as at least one unhealed Wound is on the table, each turn ends with a roll of a D10, + the number of Wounds on the table (figures put Out of Action that turn count as 2 Wounds, but don't count towards subsequent turns). If the result is 10 or higher, I'd randomly determine a threat that entered the table, activating on the following turn. Obviously, things would start slow but once the wounds started piling up, more and more threats would show up.

Captain Chelinski motioned her team forward, advancing into the cactus patch for cover; Barbie stepped forward and fired ineffectively with her SMG at the PMC leader. Freak darted forward and gave Barbie a blast from his shotgun - "1!" Out of Ammo! Meanwhile, Harlequin moved into the shadow of the nearest building, attracting the attention of Legs. 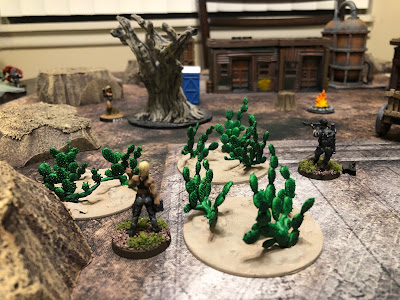 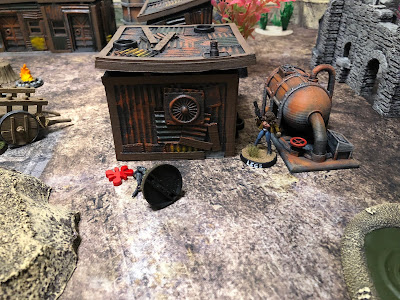 On Turn 2, Legs gave Harlequin a blast from her shotgun, putting her down with a Wound. Deano moved forward and returned fire, Wounding Legs. Captain Chelinski Wounded Barbie with a pistol shot while Freak reloaded. Woody advanced almost to the long main building of the bandit camp. No threats showed up on Turn 2. 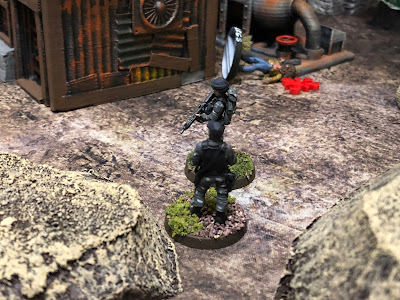 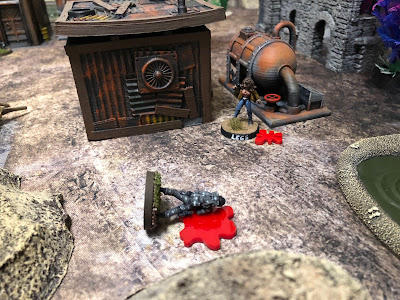 Turn 3 saw Deano rush forward and heal Harlequin with the medkit. Unfortunately, Legs struggled to her feet and fired again with her shotgun; Harlequin was put Out of Action and Deano took a Shock token, retreating towards cover. Chelinski finished off Barbie with a pistol shot and waved Woody towards the main building. Unfortunately, Woody got fried extra crispy by Grill and his flamethrower. Drawn by the sounds of combat and the smell of blood and burning flesh, a squad of Hunter-Killer Robots entered the table. 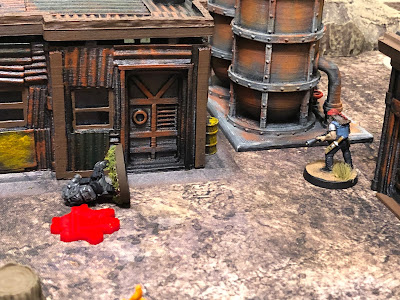 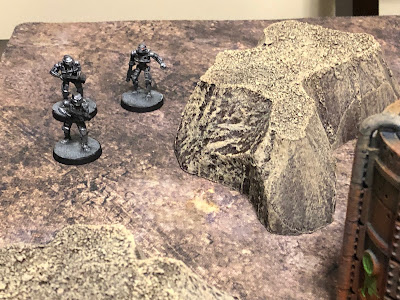 Turn 4, Chelinski shot Grill, Wounding him; he managed to regain his feet and tried to roast Chelinski, but rolled a "1" and going Out of Ammo. Hogan emerged from cover into the alleyway between the two side buildings, shooting ineffectively at Chelinski and getting sent Out of Action by Freak. Seeing this, Legs decided that it wasn't worthwhile to stick around, and routed off the table. Big Nick emerged from the long building, Wounding Chelinski and getting Wounded in turn when a Hunter-Killer robot opened fire with full-auto on him and Grill. Stumbling to his feet and retreating, Grill ran headlong into a slow-moving, blubbery mutant, drawn by the smell of blood. 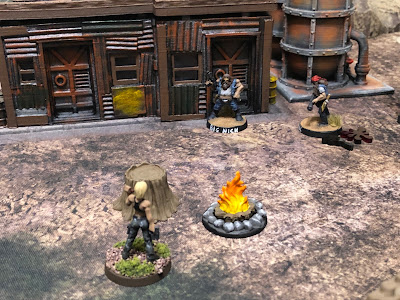 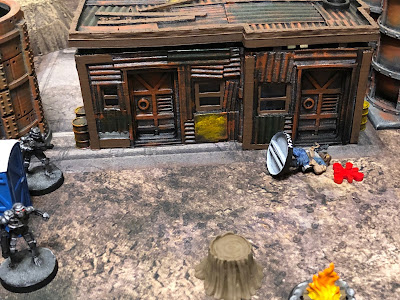 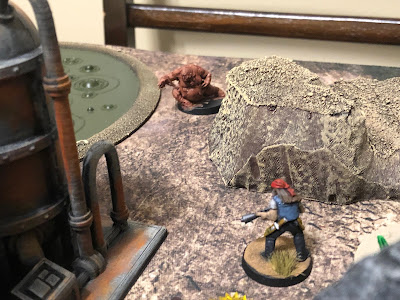 Staggering to her feet, Chelinski put two Hunter-Killers out of action with two well-placed shots; Big Nick likewise managed to regain his feet, firing again at Chelinski and going Out of Ammo. The Sludge-Man killed Grill easily in close combat, and kept advancing towards the center of fighting. Advancing across the table, Deano shot Big Nick, sending him running with a Shock token - directly into the arms of the Sludge-Man. Big Nick, wounded and out of ammo, was no match for the slobbering mutant. A second Sludge-Man arrived, drawn by the smell of carnage. 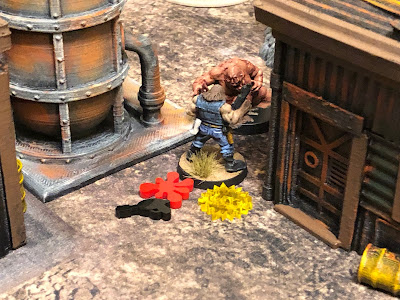 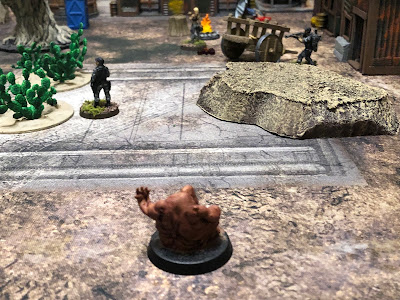 Exchanging fire with the remaining Hunter-Killer and the first Sludge-Man kept Freak and Deano busy while Chelinski obtained the Polybius hard drive. Freak ended up in close combat with the second Sludge-Man, and a second squad of Hunter-Killers arrived on the table, while Deano and Chelinski made their way back across the table towards their starting edge with the Polybius hard drive. 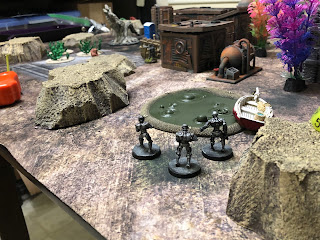 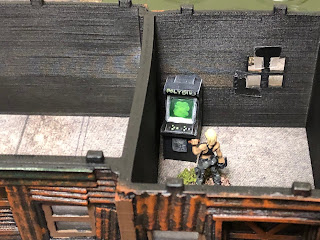 Freak managed to get the Sludge-Man between the Hunter-Killers and himself, letting the machines' simple programming save his bacon; programmed to eradicate the nearest living being, the three robots stood stock still, firing repeatedly into the regenerative bulk of the Sludge-Man without real effect while Freak slipped away, rejoining Chelinski and Deano. They'd fulfilled their objective; hopefully President-for-Life Travolta wouldn't simply order their liquidation once they turned the hard drive over to him.

All in all a really solid game; the addition of random monsters (I made a chart, but just rolled H-K Robots and Sludge-Men instead of any Rad-Zombies, Rad-Ghouls, or Big Mutants. Oh well) made a big difference in that the game wasn't simply over when the PMCs wiped out the Junkyard Dawgs; there was still a threat putting pressure on them, so there was no assumption of completing the original objective of collecting the hard drive. I still had to play out their escape from the table.