GI Joe: Attack of the Sleezoids

So I've painted enough of my GI Joe and Cobra figures to put on a solo game of Fistful of Lead, and last night I did exactly that.

Episode setup: Dismissed from Harvard for his unethical experiments, disgraced geneticist Dr. Hiram Sleeze is currently hiding out in a junkyard shantytown in the American Southwest. At Dr. Mindbender's suggestion, Cobra seeks to recruit Dr. Sleeze to their cause, and won't take no for an answer. A Joe team is dispatched to deny Cobra the opportunity to recruit Sleeze as an asset. Sleeze, for his part, is wracked by paranoid delusions; he's not going with anybody, no matter who they are! He's armed himself with a poison syringe and a couple of sticky "goo grenades," and has released a number of genetic monstrosities, called "Sleezoids," into the surrounding environment.

GI Joe and Cobra deploy at opposite corners of the board. Searching for Dr. Sleeze involves entering a building and spending an action to Search; on a 10+, he's found. Searchers add +1 to the roll for each building that's already been searched. If he's not found sooner, Sleeze is in the final building left to be searched, regardless of the results of the search roll. Once found, Sleeze had to be beaten in Close Combat to grab him. Once grabbed, he needs to be escorted to that team's starting table edge to secure victory. 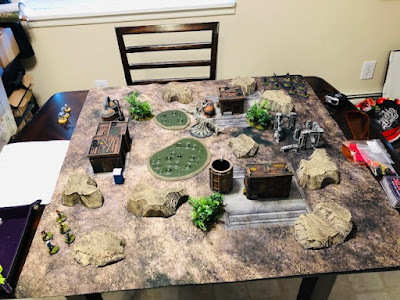 Whenever a Joker is played for a figure's activation, a Sleezoid spawns, emerging from a terrain feature and attacking a member of the opposing squad. So if one of the Joes activates on a Joker card, a Sleezoid appears and attacks one of Cobra's operatives. 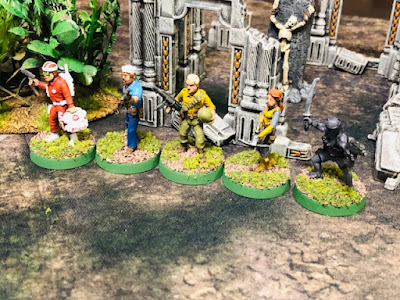 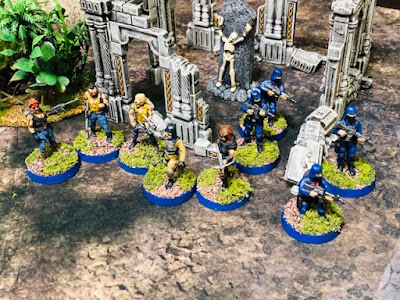 The game started with the Joes and Cobra fanning out; at the start of turn 2, Ripper investigated one building, coming out empty-handed; Duke checked another, and found Dr. Sleeze - and got stabbed with a poison syringe for his trouble!  Sleeze took of running as a pair (!) of Sleezoids popped out, attacking Zartan and Scarlett. Duke went down, wounded and delirious as the poison ravaged his system; Scarlett was wounded, but the Sleezoid forced back temporarily by Shipwreck, while Bludd shot the creature attacking Zartan. 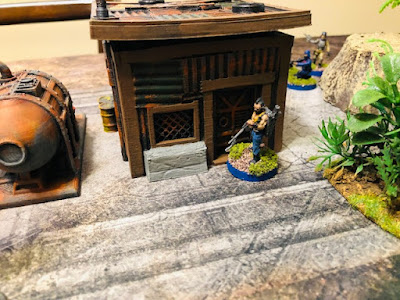 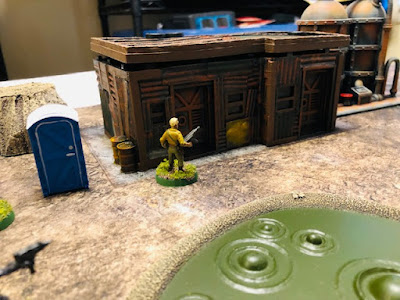 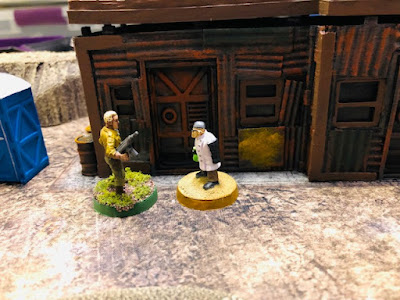 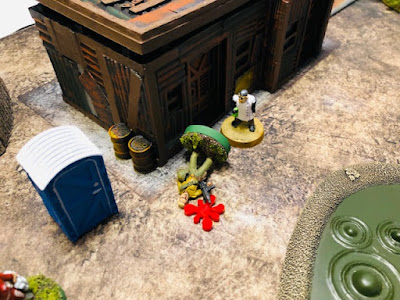 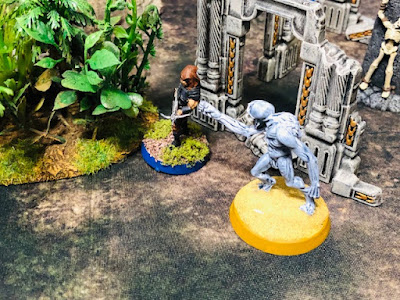 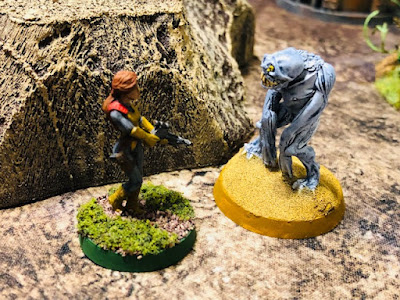 Snake-Eyes took off in pursuit of Dr. Sleeze, but got tackled by a THIRD Sleezoid. With one swing of its powerful paw, the Sleezoid put the ninja warrior Out of Action. 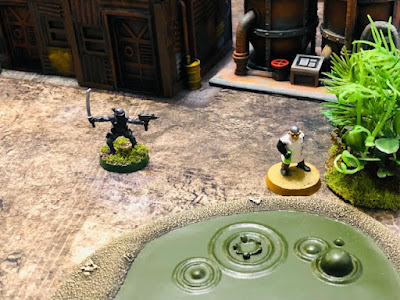 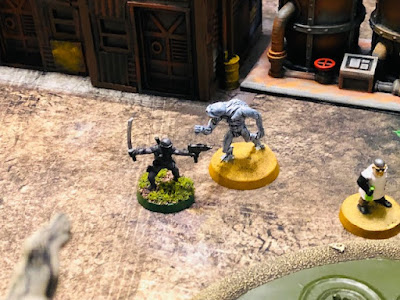 With three Sleezoids rampaging around the board, both the Joes and Cobra focused their attention more on dealing with the genetic abominations instead of shooting at each other (mostly). Lifeline got Duke back on his feet, and then moved and did the same for Scarlett. Ripper and Buzzer moved to intercept Dr. Sleeze; Buzzer got hit with a Goo Grenade, sticking him in place, and then got attacked and mauled by a Sleezoid before he could get free. 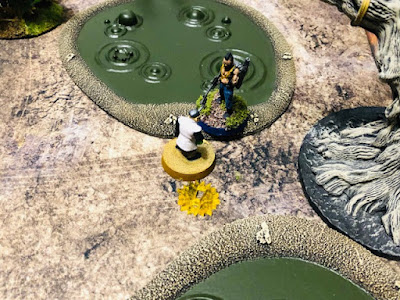 Ripper managed to grab Dr. Sleeze and started hauling him towards the table edge, but got shot in the back by Duke and put Out of Action. Dr. Sleeze took off running. Torch (aided by a pair of Cobra Troopers) and Shipwreck each put a Sleezoid out of action, and the third got caught up a fight against a nameless Cobra Trooper that somehow managed to win three rounds of Close Combat, putting a Shock token and pushing the creature away each time before the creature finally routed off the table.

With the Sleezoids dealt with, Zartan, Torch and the remaining Cobra troopers turned their attention towards the Joes; Major Bludd caught up to Dr. Sleeze and grabbed him by the collar (an Out of Action result from his Close Combat roll!).

Duke, Scarlett, Shipwreck and Lifeline worked their way across the middle of the table, taking down Cobra Troopers and sending Zartan darting from cover to cover. Zartan wasn't able to sit still long enough to reload his crossbow, and his active participation in the game was curtailed by Shipwreck's right hook. 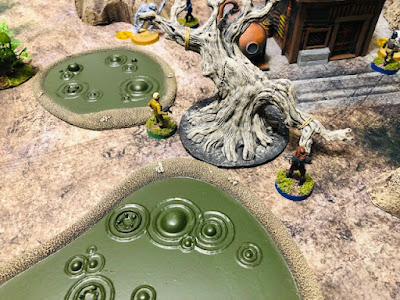 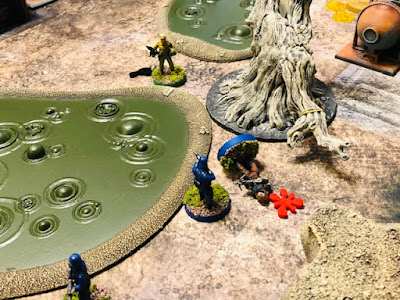 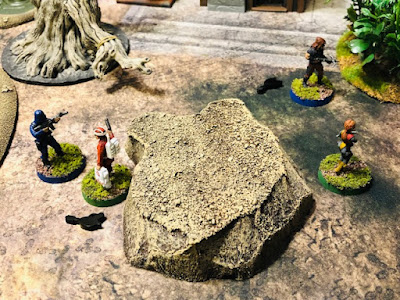 It looked like it would be a Cobra victory, as Bludd managed to drag the unconscious Dr. Sleeze within 4" of the Cobra table edge. But just then...Duke activated on a Joker. A new Sleezoid emerged, tackling Major Bludd! The creature kept the Australian mercenary tied up long enough for the Joes to converge on his position, and 4" from the table edge, the Sleezoid put Bludd out of action before getting killed itself with a crossbow bolt from Scarlett. At the 11th hour, the Joes eked out a victory! YO JOE! 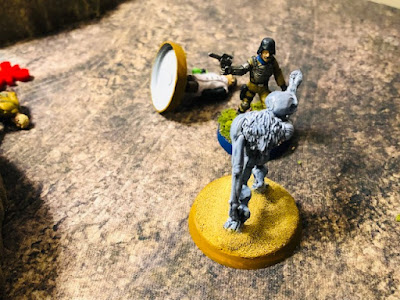 This was a fantastic game that kept me guessing. Having three Sleezoids emerge within the span of two turns took me by surprise for sure. At one point every "Out of Ammo" marker I had was on the table (the black "raygun" piece in some of the pictures). Multiple figures were wounded, went down, struggled to their feet...Zartan and Shipwreck both healed by activating on the Queen of Hearts card at different points during the game.

Both Snake-Eyes and Duke were ultimately put out of action, but Scarlett, Shipwreck and Lifeline were in perfect health at the end of the game. When the game ended, everyone from Cobra was out of action except for Zartan, who was prone with two Wounds on him. Just a brutal game; Cobra had more long-range firepower with the five automatic rifles they were able to bring to bear, but Lifeline's presence helped balance that somewhat by keeping Joes on their feet and in the game. In retrospect now I realize I forgot to roll for Bludd's armor to see if it lessened the hit from the Sleezoid at the end, but with so much going on this solo game ended up taking about two hours to play through and by the end of it my brain was getting foggy.