I got some new - and not so new - gaming goods recently, thought I'd take a post to show off a little and talk about what I got.

First off, I bought three out of the four new Carcosa modules written by Geoffrey McKinney.  These aren't so much adventures as open sandbox hex crawls - each booklet details a quadrant of a larger map that player characters are free to roam as they please.  Each quadrant is dominated by a single terrain type - Swamps, Barrens and Jungles. 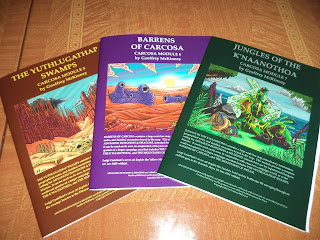 Unlike the 2008 Carcosa release, which was done as a supplement to 1974 OD&D, or the 2011 re-release which was geared towards Lamentations of the Flame Princess, these modules are written with AD&D rules in mind, and as such reference spells and classes that don't previously appear in Carcosa, such as Clerics and Magic-Users (as opposed to Carcosa Sorcerers) as well as monsters not previously seen, such as traditional Lizard-Men.

The books are printed by Lulu, and are well put together, and for what it's worth, this is the first order I've gotten from Lulu that wasn't damaged or otherwise contained an "oops." One time I got somebody else's order combined into mine - so I got my Swords & Wizardry books *and* someone else's apocalyptic new translations of the Old Testament which described God as an extraterrestrial!

Other than the covers, the books are devoid of art, which is a bit of a shame; likewise, page numbers are missing which makes it a bit harder to track down information.  The maps on the back cover are nice, but the hex-numbers are often hard to read.

Of the three, I think I enjoyed my read-through of The Yuthlugathap Swamps the most and felt like it was the most immediately useable, with its assortment of Lizardman strongholds and the internecine warfare that marks their relationship with each other.

Overall, I'm kind of so-so on these books, and I don't really feel like they got me fired up and excited for running a Carcosa game, which is something I have been considering lately.  I don't regret the purchase, and I'm sure I'll pull some useful material out of them for use in future games, but I'm just not excited to run them for people.

My FLGS, Just Games Rochester, has two collections of old Dragon magazines; on the wall rack, above the endless plethora of Pathfinder releases, are the "new" issues - copies that are still in great condition, nothing's been cut or torn out, while in a compartment under a display table is a stack of "used" issues.  I grabbed two from the "new" rack; issue #137 because I've always liked that Larry Elmore snow lizard painting, and #138 because it was the next one consecutively and it had a bunch of undead in it. 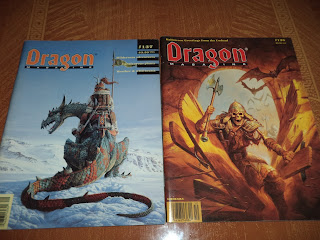 I gave both issues a read-through today while waiting for some paint to dry on a row of figures, I was really impressed by the sheer quantity of content here, with #137 being especially full of material I would absolutely 100% use in a game - the ecology of carnivorous plants, the weather system, the Pleistocene mammals, and the article on animal skins, tusks, etc., as treasure are all good, with three of the four being deep in my wheelhouse.

#138 was useful on two fronts - a great article detailing a new grimoire for Call of Cthulhu and a related monster I've never seen referenced before, and a listing of new and fun undead for AD&D.  Both of these seem like things I'll get some use out of in the future.
Posted by Bill at 4:22 PM