We had a smaller group this week, and a little bit of trouble with set-up - a folding chair broke under me when I sat down in it and we ended up a bit squeezed in next to an X-Wing game, but overall it was a good session.  Let's have a run down.

A week or so passed since the events in Orne Library and the deal made with the agents of the "Outer Ones." The Investigators were awakened one day by the sound of police sirens heading to campus.  Following the sound of the sirens brought them to Orne Library, where the bodies of those same agents - the tops of their heads neatly removed and their brains missing - were stacked up like cordwood in front of the library.  While observing the scene, Darren noticed a black Cadillac parked nearby, a bearded man visible in the driver's seat.

Since Daphne Devine/"Roger Harrold" was not among them, they swiftly paid a visit to "his" office; not finding "him" there, Nick trashed the office and then they headed to Harrold's residence.  Finding "him" at home, they escorted the ersatz professor to a nearby cafe for interrogation.  They quickly ascertained that "Harrold" had nothing directly to do with the destruction of the agents, but suggested that the "Outer Ones" don't take kindly to failure and don't feel particularly bound to honor bargains made with what they perceive as an inferior species.

Lunging, Harrold concluded the interrogation by drawing a metal ovoid, not much larger than a hen's egg, from a pocket and electrocuting Perry with it, badly burning the journalist and leaving him paralyzed and unconscious for a few minutes.  As Harrold turned to run, Nick pulled out his pistol and shot the professor in the head.  After explaining the situation to the satisfaction of the police, the investigators left the cafe - and saw the black Cadillac.  Deciding to introduce themselves, they struck up a conversation with first the driver, a large Scotsman, and then the passenger - a beautiful blonde woman who introduced herself as Selena.

Selena explained that her employer had a job offer for them, a job relating to "our mutual friends in the mountains." Her employer, she explained, was Michael Abelard, the owner of Federated Oil and Chemical - the financiers behind their college field trip to Cobb's Corners, Vermont.

Driving to the harbor, they boarded an amphibious plane and flew to Detroit, where they were met by Abelard, who laid all the cards on the table - his son had been killed by the Outer Ones while mountain climbing in Tibet, in an accident that had also cost Abelard the use of his legs.  Since then, he'd devoted his life and fortune to hunting these creatures and learning everything he could about them in order to destroy them.

He asked the investigators to lead a team of scientists and soldiers into Cobb's Corners in search of a suspected hidden base belonging to the creatures.  His team had the scientific background, but no practical experience with the region or the creatures, which is where the investigators would come in.  Their concerns about being used as "bait" Abelard allayed with a blank check and an assurance that their grades for the semester would be taken care of at Miskatonic.

They were given a week's rest and recuperation at the Detroit facility, allowing Perry to recover from his electrical burns and the investigators to train with firearms.  They were introduced to some of the other individuals who would be going on this expedition - Dr. David Drake, a psychologist, historian and occultist; Dr. Sarah Matherson, a forensic pathologist; Captain Sam Morrison, chief of security; and Larry Nekler, engineer and radio technician. 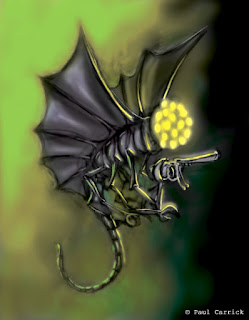 Dr. Matherson was especially interested to hear about Perry's experience with one of the Outer Ones, and shared her research with him.  She even took the investigators down into the lab for a brief tour, where they glimpsed an autopsy of a desiccated, humanoid form - albeit one with stumpy, pillar-like legs, long arms, no neck and a wide, lipless mouth.  Dr. Matherson explained that a number of these natural mummies had been found at an abandoned base in Peru, and that they were believed to be a new form of the creatures, possibly an attempt to mimic human form instead of having to rely on brain transplants.

Finally, she played them an audio recording, of an interrogation conducted the one time they captured one of these creatures.  The recording was horrifying, the entity begging for food - unable to digest earthly matter - while Matherson demanded it answer her questions, delivering painful electric shocks to the creature when it hesitated. The creature - identified as a "metch kangmi" in Nepalese on the recording, a name Nathanlie recognized as referring to the "abominable snowman" of the Himalayas - was forced to admit to coming from a ninth planet, Yuggoth, at the far end of the solar system, but was able to say little more before Matherson inadvertently killed the creature with electricity.
Posted by Bill at 4:52 PM