Gina, my better half, had a total of three job interviews last week, and should be hearing back soon regarding employment - the nice thing is, if she gets this job, we'll be working in the same building, simplifying our morning commute substantially and cutting down on the amount of gas I'm burning and the number of miles I'm putting on my odometer.

Additionally, this morning she took her RHIT (Registered Health Information Technology) exam, which is what she's been going to school for for two years - she got a degree in Health Information Technology as a prerequisite for sitting for this exam.  And graduated in the top 5% of her class, I should note.  She was terrified going into the exam and halfway through convinced herself she'd already failed it, and rage-finished the exam, absolutely convinced she'd have to shell out another $250 and wait a penalty period of 45 days before taking it again.  The test is graded right there and then, and the results presented - AND SHE PASSED! She's now certified to work any number of medical coding and billing careers. 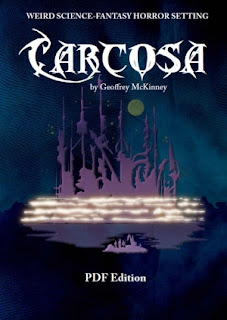 While she was in her test, I sat in the car outside with a couple RPG books and got some reading done.  I've been reading my PDFs of the game Astonishing Swordsmen & Sorcerers of Hyperborea lately, and have my eye on ordering physical copies through my Friendly Local Gaming Store, Just Games in the near future.  Today, however, the Imp of the Perverse drove me to revisit the 2011 Lamentations of the Flame Princess edition of Carcosa.

Carcosa is a very dark fantasy supplement, detailing a world 153 light-years from Earth, infested with Cthulhu-monsters, mutant dinosaurs and giant insects.  13 Crayola-colored races of Men (including three colors outside the normal human visible spectrum) fight over scavenged alien technology and to defend their crapsack settlements from the depredations of monsters and cruel sorcerers alike.  The magic-system is ritual based, instead of D&D's usual "fire-and-forget" method of spellcasting, and the rituals almost all require varying degrees of human sacrifice - magic is supposed to be inhuman, alien, uncomfortable in Carcosa, and gamers are still throwing fits about this book in certain corners of the Internet.

I had been thinking that I need to have a back-up game prepared for situations where less than four players show up for my biweekly Cthulhu campaign - I normally have six players, so four is the quorum - below that, we don't run the campaign.  And it occurred to me that a session of Carcosa - with the more usual LotFP spellcasting system in place, since we do play in public - might be a nice change of pace and would be something good to have handy.  So in the two hours Gina was in her exam, I had the Carcosa book open in my lap and the Notes app open in my phone, typing out notes for a quick one-shot with a little bit of overland travel and a small dungeon-crawl (with the above-ground sections of the Moat House from the Village of Hommlet repurposed into an alien stronghold).

Getting home, I retyped it into Word as a document I can actually run a session from.  Tomorrow I'll make a stack of pre-generated characters.

Keep in mind this is all "back up" work on the off-chance I only have three players show up.  Oh well, I'll run it as a stand-alone one-shot at some point later on.
Posted by Bill at 7:12 PM

Email ThisBlogThis!Share to TwitterShare to FacebookShare to Pinterest
Labels: Carcosa, DMing, Lamentations of the Flame Princess