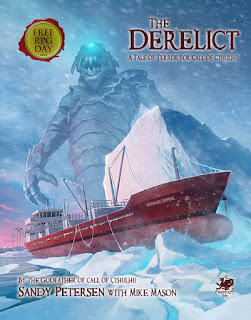 There is a ton of demand for Call of Cthulhu at my FLGS.  So much so that, since my biweekly game is a campaign, I decided to add a monthly one-shot to my schedule, set for the first Saturday of every month.  Last night was the first of these events, and I decided I wanted to run the adventure put out by Chaosium for Free RPG Day, "The Derelict." I had been fortunate enough to score one at my store before they ran out, plus I got the PDF version for being a member of the Cult of Chaos - which had appended six pregenerated characters that were, frankly, better integrated with each other and with the adventure than the ones I'd come up with, so thanks to Ron McClung for providing those to Chaosium.

Despite a few people being forced to change their plans at the last minute (life happens, I get it), I still had four players at the table for this session, which worked out very well for me - I'd been afraid that I'd get two people showing up and be forced to try and adapt the adventure on the fly.  Two of the players last night, if I recall correctly, had never played Call of Cthulhu before, and one hadn't played in 20 years, so I got the honor of being the introduction and re-introduction to the game for three-quarters of the table last night; the fourth player had played once before, in the Parsonsville Horror one-shot I ran in February.

Our Dramatis Personae for this adventure:

Around mid-afternoon, several days into their voyage from Boston, Massachusetts to Liverpool, UK to sell the yacht Delilah, Mac spotted something red and white on the horizon - the red-painted refrigerated cargo ship the Groenland Tropisch, beached on an iceberg.  Informing Captain Brentwood, they changed course to investigate, in keeping with Maritime Law.

Asking the ladies to stay aboard the Delilah, the men went aboard to investigate, finding the ship silent, without power, and covered in a thin layer of ice.  "Dodge" swiftly found a severed hand frozen to the deck, which appeared to have been chewed off the arm it had once been attached to.

Mac wanted to focus on finding the captain's quarters and the safe therein, while Van Hollisander and Dodge also wanted to try to restore power to the ship.  They soon found that the wiring had been torn apart and the paneling beaten to pieces.  They also found a six foot long "harpoon" of some sort of glass or crystal, radiating an unearthly cold, embedded in a steel bulkhead.  "Dodge" pulled it loose and, after suffering some minor frostbite from handling it, zip-tied a towel around the haft to give himself a safer grip, carrying it with him.

The captain's quarters contained no safe, but they did find the captain's log (the adventure lists the log as being in both the captain's quarters and the captain's office; I chose to have it here), and managed to translate a bit of the Norwegian text with the help of their iPhones, learning that the radio operator had gone insane, destroyed the radio room with an axe, and been confined to his cabin.  Investigating revealed the radio operator dead by his own hand, a silver-handled straightrazor having been used to slash his throat.  The radio room and wheelhouse had both been destroyed, though "Dodge" and Van Hollisander soon noticed that while there was blood in the radio room, there was none in the wheelhouse.

Hearing a scream of horror and a loud splash coming from the Delilah, they raced back to discover the captain and first mate in pieces, scattered across the cabin in a morass of blood.  Ashley May was pinned to one of the beds by another crystalline harpoon, driven completely through her, the mattress and into the floor below, her limbs having been badly mangled by what appeared to be large teeth.  And only Liz's severed legs were found, floating in the bloody hot tub.

Pulling on his SCUBA gear, "Dodge" went over the side to investigate the loud splashing, and after being missed by two crystalline harpoons that seemed to come from nowhere, he took his own and made a swimming charge in the direction he thought they came from.  He felt two enormous, unseen webbed hands close over his upper body and was then torn in half.

Discovering the controls and radio on the Delilah destroyed, Mac, McCrane and Van Hollisander decided they had to make a final stand against whatever was picking off humans in the North Atlantic.  Using bedsheets for wicks, they drew fuel from the yacht's tanks, smearing it across the floors and staircases, and rolling out the propane tanks to serve as makeshift bombs (Brandon actually works for a company that provides equipment for restaurant use, so he was able to offer some insight on what the galley on the Delilah would have), they huddled together atop the sun deck, ready to release the dinghy and ignite the fuel with a flaregun should whatever was out there show its face.

Hearing a splash and feeling the ship lurch hard - as if something large and heavy was pulling itself up out of the water onto the deck - and hearing the sound of something heavy dragging itself across the deck, Mac and McCrane released the dinghy into the water and jumped in, and Van Hollisander shot the fuel-trail with a flare gun before diving over the side, landing safely in the dinghy.

As they sped away from the burning ship, Mac lamented his lost opportunity to regain financial solvency.  Van Hollisander, glancing back, saw something large and on fire hurl itself off the deck into the sea.

All in all, it was a great session - I would rank this as one of the top five sessions of Call of Cthulhu I have ever run, and I have to give a lot of credit to Sandy Petersen and Mike Mason for their top-notch adventure for that.  Other than the issue of the captain's log being in two places and it not being real clear how the Investigators are supposed to get from the Delilah to the Groenland Tropisch, (we ended up having the gangway of the Tropisch being almost level with the top of the sun deck of the Delilah) I think this is a near-flawless adventure.

Noteworthy is that, except for Dodge, the Investigators never actually encountered the monster, just its traces - drag-marks where it had pulled itself through the ice on the cargo ship, smeared blood (they missed a bloody, three-fingered, webbed handprint on the wall in the Delilah's cabin), scattered human remains and the crystalline harpoons.  From these, the players built up a mental image of what they were facing that was perhaps far scarier than the actual monster would have been.  The invisibility of the creature definitely amped up the fear factor - and interestingly, from my perspective, seemed to do so better than the invisibility of the Star Vampire.

I think what I'm proudest of was the way the ship lurched when the creature pulled itself on deck; no physical dimensions are given for the creature, but I gauged from the illustration that it was probably close to ten feet tall, and I pegged it's weight at three quarters of a ton.  So having the boat shift as it pulled itself on board...I think that, more than anything else, was what triggered the players to say "screw it, let's set the boat on fire.  No, I don't need to see what we're up against."

It was kind of a short session - we got a little bit of a late start, and then around the time Dodge got torn apart I got the head's up from Matt, the store owner, that the store would be closing in 15 minutes.  Not having time to run a full-fledged last stand, and deeming it cheap to have the creature swim under their dinghy and sink it, I decided the best ending would be a THE THING-style pyrrhic victory; they have escaped with their lives, but are stranded in the freezing North Atlantic - and the thing may still be out there.

The best part of this session was hearing Brandon voice an interest in running Cthulhu - he's been a Shadowrun GM for years, and is one of the big wargaming voices at the store, but Call of Cthulhu has really captured him.  I gave him my physical copy of the 7e Quick Start Rules, and he'll be buying the actual rulebooks when they arrive in store, hopefully in time for "Gen-Can't," an event being put on in-store for people who can't make it to GenCon.  So far 14 people have RSVP'd that they would like to play Cthulhu at Gen-Can't, so I'm going to need all the help I can get.
Posted by Bill at 10:37 AM