With October being here and Halloween being on the horizon, I figured it was high time I got some spooky gaming in! With the Chaos types I just finished, I was in a Fantasy mood, and as luck would have it there's a scenario in the Fistful of Lead Fantasy: Might and Melee book with warbands duking it out in a haunted ruin as ghosts swirl around them. Perfect!

The Archmage Lutholio and his retinue, and the followers of the Blood God, commanded by Korgan Bloodaxe, both arrived at the haunted ruins, following rumors that an enchanted sword was buried somewhere within. To find it, they would need to decipher clues carved on five timeworn statues. Each time a statue is deciphered, it spawns a ghost that moves randomly around the battlefield. Any figure that activates within 6" of a ghost has to past a Hard Task roll (8+ on a D10) or gain a Shock token, reducing their effectiveness. The sword is hidden under the final statue, meaning by the time the sword is obtained, there will be five ghosts moving around. 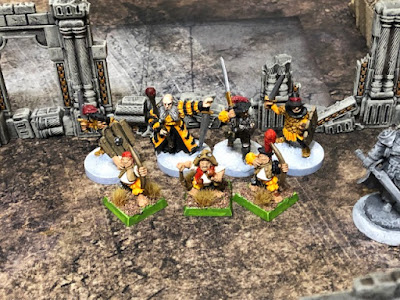 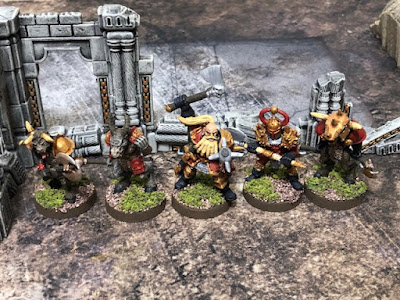 With time being of the essence (at the beginning of Turn 6, I would roll a die to determine if it was the final turn or not), both warbands fanned out immediately into the ruins, with Lutholio casting the spell "Light-Footed" on Hans and depositing him right in front of one of the mid-table statues to start investigating immediately. Hampered by their heavy armor, Korgan, Sargus and Wilhelm struggled with statues nearer the edge of the ruins; the Halflings spread out to take up shooting positions, while the beastmen (who maybe can't even read), moved in to get violent. 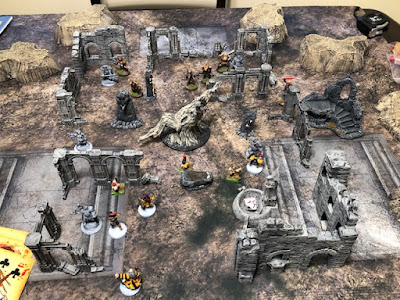 Hans deciphered his statue, unleashing a ghost, and was almost immediately confronted by Grim-Gory, though he actually won the fight and pushed the beastman back, making room for the halflings to pepper him with arrows (ineffectively). 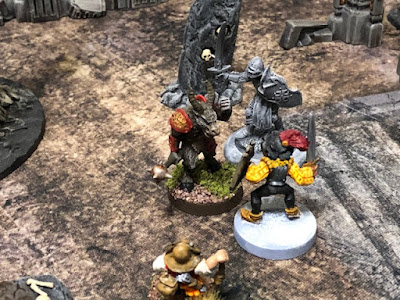 Korgan deciphered his first statue and moved deeper into the ruins, while Sargus continued to puzzle over his. Franz managed to decipher a statue towards the middle of the table, bringing the total for Lutholio's retinue up to 2, and the number of ghosts on the table up to 3. Three-Eyes and Argor Bloodhoof converged on Franz's location, though Argor stopped long enough to bisect a halfling on his way there. 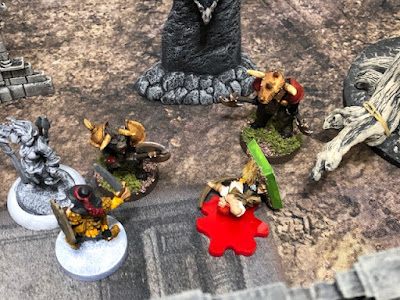 Lutholio cast "Light-Footed" a second time to get Franz away from the beastmen and towards a third statue, though unfortunately this put him directly in front of Sargus, who decided to take his frustration at the translation out on him. Meanwhile, Hans, pursuing a fleeing Grim-Gory, got charged and dismembered by Korgan. 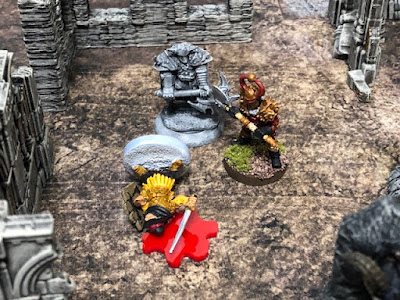 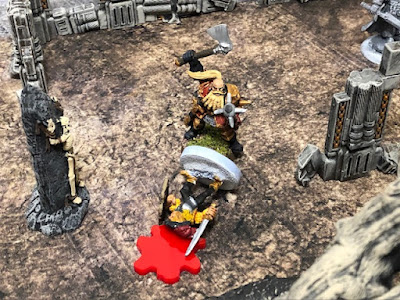 Sargus returned to his statue, finally completing his translation (releasing Ghost #4), while Korgan moved towards the center of the table, and the beastmen turned their attention towards the two remaining halflings and Wilhelm. Lutholio hit Korgan with a Fireball, incinerating the blood-crazed warlord, and Wilhelm began to cleave through the beastmen as fast as they came at him.

With Wilhelm hacking and slashing at their foes, Lutholio stepped in to begin deciphering the final statue as Sargus joined the fray, being wounded by Wilhelm but managing to stab the knight on his way down, leaving them both wrestling in the spreading pool of blood. 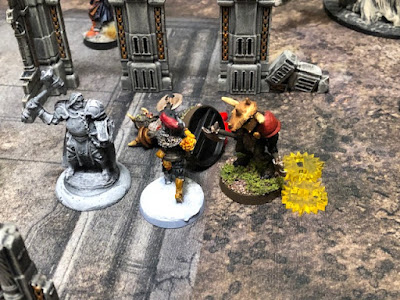 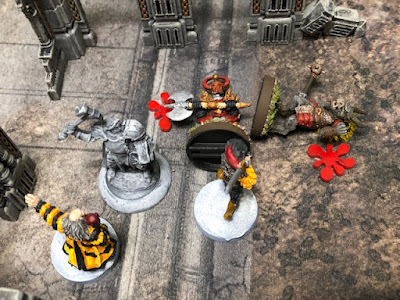 Armed with the enchanted sword, Lutholio stepped in and finished off Sargus; Wilhelm activated on the Queen of Hearts, healing his Wound and allowing him to stand up refreshed and finish off Grim-Gory. The sun rose over Lutholio's victory as he gathered up his wounded and slain followers and set off for him, leaving the followers of the Blood God, slain to a man, for the buzzards.

All in all, a great use of my Sunday evening; I made a few mistakes in play (I forgot that Lutholio's retinue had the Fearless group trait, meaning they ended up taking more penalties from Shock tokens than they should have, for the first half of the game) and it really wasn't a scenario that Korgan Bloodaxe's men were going to excel at meeting the victory conditions for, but I had a lot of fun. There were a couple moments where ghosts parked themselves squarely in the middle of fights - at one point, all but three figures on the table were within 6" of the same ghost - so everyone was collecting Shock tokens pretty much constantly from Turn 2 onwards, even with three of the ghosts ultimately just circling one corner of the ruins for the final three turns.

Speaking of Turns; in the setup for this scenario there is a turn limit; at the beginning of Turn 6 I rolled a D10; on a result of 1-6, it would be the final turn, 7+ would tell me the turn the game ended on. I rolled a 9. Wilhelm finished off the last of the Blood God's followers (also, holy crap, Wilhelm successfully fought and put Out of Action 3 of the 5 members of the enemy warband) on Turn 8. Armor definitely prolonged some of the early fights, but Wilhelm's 2-handed sword ignored the beastmen's light armor and cut a pretty quick swath through them.