Stockpiling for the Winter

It has been unseasonably warm here lately - and given that I'm in Western New York, just below the Great Lakes, it's only a matter of time before the other shoe drops, and given the current warmth, the "other shoe" will be an iron-shod boot dropped from orbit.  Last year this time much of this region was digging out from under a six-foot snowfall.  So I've been taking advantage of the warm weather to get as much assembly and priming done as possible in preparation for the Analogue Hobbies Painting Challenge, which begins December 20th (just 14 days away!).  I believe I've hit the limit of what I can do for right now; Gina and I agreed to do a "spending freeze" for the month of December; neither one of us can spend money on our hobbies right now to take care of buying presents for others.  So anything else I want to buy - including more miniatures, bases, etc - has to wait until January 1st.

In the meantime, I have 42 individual 28mm figures on foot and a small diorama piece to keep me busy; these include two full warbands for Frostgrave plus additional figures that can be swapped in and out for both of them, a couple miscellaneous figures, plus my entries in the first two Bonus Rounds, "Nostalgia" and "Epic Fail."

Here's a group shot of everyone assembled, primed, and ready for December 20th: 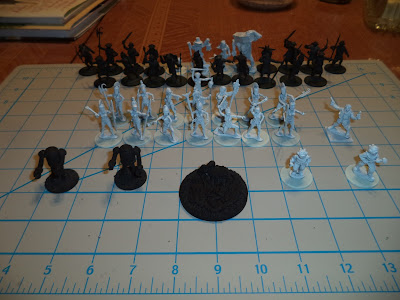