Terezinya watched the moon rise, the silvery light illuminating the scintillating towers of Felstad in the distance. She drew her robes more closely around herself; she regretted not packing a thicker robe, or at least trousers. For some reason, she thought that the thawing of Frostgrave meant that the area around it was warmer. Her henchmen, a band of thuggish, green-skinned orcs, were gathered around a bonfire, passing around a helmet filled with beans and pork sausage and slurping noisily - especially the big one, with the axe. She sighed. They were the best she could do on short notice; she hoped to replace them with more...effective troops once in the city.

A scuff of shoe leather on stone caught her attention. She turned. Her apprentice, John Grymmlan, had brought her a cup of tea - bone china, of course. She took it, and sipped appreciatively.

"Why wait until dawn, Mistress, to complete our journey? We could march through the night and get there before the sun rises." He commented, his voice like creaking leather.

She smiled thinly. "And have our boys too tired to fight, John? No, let them enjoy their rest. They're no good to me dead."

Grymmlan scowled, but could not maintain the expression. His dry lips involuntarily cracked a smile. He laughed, a hard, braying sound.

Terezinya joined him in laughing. Wiping a tear from her eye, the Necromancer said, "I had you going for a moment there, John."

Here's a few shots of my first Frostgrave warband - Terezinya's Tomb Robbers, led by the necromancer Terezinya and her apprentice, John "Dig Me No Grave" Grymmlan.  With them are Lug-All the Pack Mule (carrying a casket full of supplies), the orcish barbarian Boss Grug, two Archers, Hoodsie and One-Eye, and a gaggle of Thugs to round things out.  Finally, there's Lil' Anklebiter, an Imp/Familiar Terezinya can try to summon at the start of games.

You'll notice there are more figures here than can be fielded in a regulation game.  I think my "standard" list will be Terezinya, Grymmlan, Boss Grug, the two Archers, four Thugs and the Pack Mule, but in a pinch I can swap out the Pack Mule for the fifth Thug. 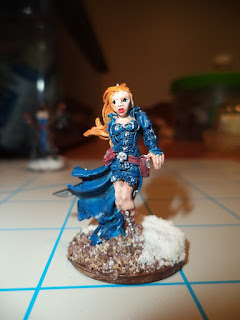 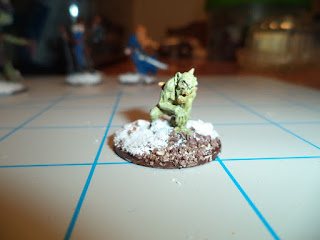 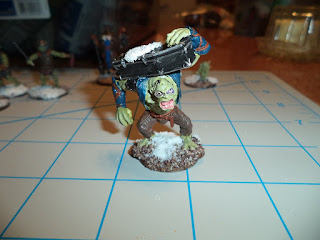 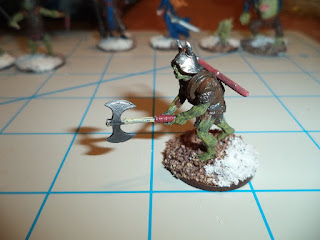 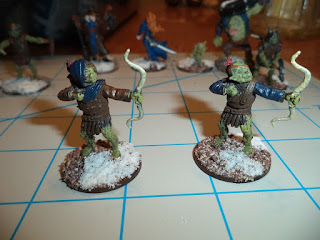 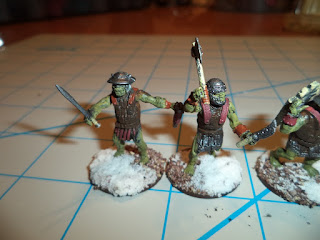 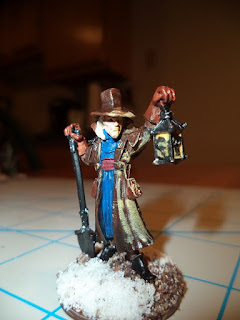 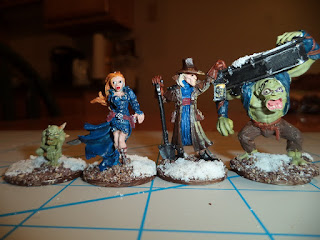 Terezinya, Lil' Anklebiter, Grymmlan and Lug-All are from Reaper Miniatures; the Orcs are built from a Wargames Factory boxed set that I believe is currently out of production.

As an added bonus, here's a WIP shot of a couple of Reaper Bones figures I dug out of my closet to test out some new Reaper paints on; I'm in the process of upgrading my collection of paints from craft store acrylics to Reaper brand paints, and I decided to see if I could get better results on the Bones figures using these than with the old paints.  The "Irongrave Warrior" I painted up as a statue and the verdigris-crusted armor of "Arrius, Skeletal Champion" (who stands head and shoulders above the Irongrave Warrior, I should add) speak for themselves.  The Irongrave Warrior will become a piece of Frostgrave scenery while Arrius will be an armored skeleton for my Frostgrave bestiary. 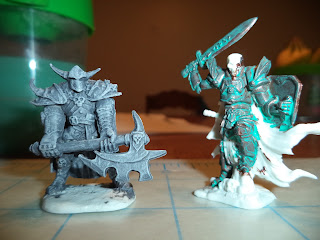