Murderhoboes of Devil's Canyon, Session 6: Going Out With a Bang

We wrapped up our current D&D campaign this past weekend, which not only frees up my writerly creativity for a secret writing project I've got in the works, but also frees up my weekends for the Painting Challenge.  Here's a rundown of how things went:

Adventurers and ne'er do wells were beginning to drift away from Devil's Canyon, citing that the dungeon had been "played out" and the risks now far outweighed the rewards, but our heroes continued to stick around, blasting things with their Cosmic Ray Cannon and counting the staggering quantity of gold they'd accumulated by doing so.

After a few weeks of this, they were summoned to the floating tower of Meinrad the Star-Gazer, now doubled in size again (standing 24' tall if he'd stand up) due to the weird magical energies he was channeling, and with a TOTAL RECALL-style conjoined twin growing out of his chest that now did the talking for him.


He explained he was going to be leaving the Devil's Canyon region soon, but had one last job for the PCs.  A hundred miles north, on the coast of the Sunset Sea, stood a temple held by a band of cultists who had summoned and bound the demon VANAMAN: the last time VANAMAN was unleashed upon the world, fifteen million years earlier, it had exterminated the Second Empire of the Serpent-Men.  Meinrad wanted the adventurers to breach the seals on VANAMAN's bindings and banish it back to Hell.  This would not be easy, as the complex was shielded by a device called a "Nullifier" that prevented energy weapons, teleportation and scrying effects from functioning within 20 miles of the complex.  Meinrad was willing to offer them teleportation to the edge of the Null Zone and explosives to deal with the bunker housing the Nullifier.

Sneaking in under cover of darkness and bypassing a hovercraft-mounted patrol, they quickly found the temple, standing on a promontory of rock on the edge of the sea, and the bunker, standing atop an outcropping rising from the waves about 20 yards out to sea.

Crossing the water, and using their talking dog Asheron as a distraction for the guards, they broken 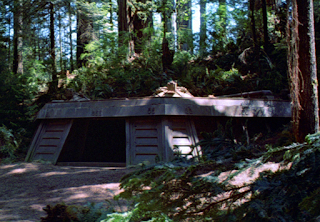 into the shield generator bunker and began to plant their explosives, setting the timer for an hour.  This would give them time, they figures, to infiltrate the temple, find the leader of the cultists and kill him to ensure he did not release VANAMAN.

Killing two guards and stealing their uniforms, Johann and Turkman led a loosely manacled Helga into the complex, claiming they'd caught her snooping around the perimeter, while Baphomohawk, magically invisible, followed behind carefully.  Their ruse worked, and they were soon brought to see Voros, the leader of the cult.

Voros turned out to be a doddering, talkative old man whose comments about VANAMAN and what they were doing to contain it began to make Helga doubt that Meinrad had been on the up-and-up regarding their mission.  Before she could convince her fellows, however, the explosives went off, destroying the bunker, and Turkman brained Voros to death.

They quickly learned, however, that Voros was correct; that VANAMAN was a terrible creation of the Elder Things, the last of whom maintained a lonely vigil over the containment unit containing the hovering silver sphere of VANAMAN, until blasted apart by a Cosmic Ray Blast; a shot to the containment unit caused the sphere to collapse into flowing, quicksilver-like liquid that began to throw out pseudopods and consume anything it touched, growing rapidly in size.

Energy blasts caused the VANAMAN entity to double in size with each shot, and it quickly devoured Johann's meteor-bladed axe.  Running outside, the party soon saw Meinrad's Tower floating overhead, and were teleported aboard.

Here, the creature that was Meinrad gloated that the PCs had done exactly as he wished, and now, with the coming galactic alignment, he would absorb the "Power Cosmic," become a god, and with the VANAMAN under his psychic control, conquer world after world throughout the universe.  He offered the PCs the chance to become his Heralds, the fly the spaceways and find new worlds for him to conquer. 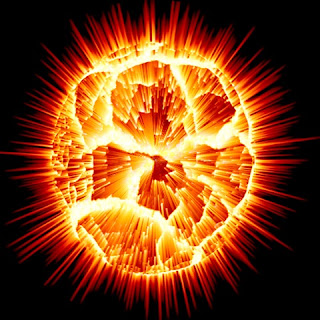 Johann blasted Meinrad with a Cosmic Ray Blast, the beam slicing through the engines holding the tower aloft on its way towards the unholy warlock.  Dying, Meinrad revealed that without his psychic control, the VANAMAN - not a demon, but tens of trillions of self-replicating nanobots, "Von Neuman Machines" in the Old Speak - would consume the entirety of the planet's mass and everything on it in a matter of months.

Johann went to the window, where he could see his Cosmic Ray Cannon.  With a tear in his eye and a mutter of "best damn investment ever," he pointed the targeting gauntlet at the Cannon itself, overloading the capacitors and setting off a massive thermonuclear explosion, which would hopefully destroy the VANAMAN.  As the expanding, incandescent cloud of screaming atomic energy reached the tower, Helga threw an amulet of force-field generation around hers and Asheron's necks.

The tower, the temple, everything in them, and the surrounding landscape for thirty miles in every direction, was completely consumed, reduced to a fine, white ash.

A bit of ash crumbles, and Asheron the Talking Dog pops his head up and surveys the landscape.