Progress on the Home Front

Greetings, readers, and to my fellow Americans, happy Thanksgiving! I certainly had a pleasant one this year, spent with friends rather than family, and more importantly, I've taken some time off work to give myself a five day weekend, during which time I'm hoping to get some serious modeling work done.

Going through the rules for Broken Legions, I'm finding myself not wowed by them - certainly not the immediate, viscerally-positive reaction I felt during my first read throughs of Frostgrave and Lion Rampant.  I think I'm going to have to give them a play-through or two to really see if they're for me or not.  That being said, I'm revisiting Lion Rampant (I might be getting Dragon Rampant as a Christmas gift, which is the only reason I've held off thus far on buying a copy) and I downloaded the PDF version of Wargaming Soldiers and Strategy magazine issue 82, which has a Bronze Age variant, "Chariot Rampant." As some of you may recall, back in 2014 I made a rather large order from Wargames Factory, before they went belly-up.  Among what I bought were a box of Greek Hoplites, a box of Fantasy Amazons, and enough Achaemenid Persians to choke the Hot Gates. 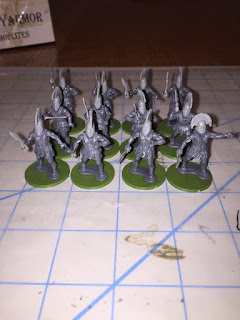 Digging out the box of Hoplites the other night, I assembled a unit of 12, based on round bases for skirmish gaming, for use with Lion/Dragon/Chariot Rampant.  I can also draw from this pool of figures to create an "Argonauts" warband for Broken Legions.  I opted to model them with kopis-style short swords rather than spears, in part to make them easier to store and less likely to break in storage, and in part because the default Argonaut in BL carries a hand weapon, not a spear.

Shields will be glued into place after they're painted.

Tomorrow I'm hoping to get out the box of Amazons and assemble a unit of them; in a game I'd probably field them as Fierce Foot or similar in Lion/Chariot/Dragon Rampant.  After that I'd like to start on a couple units of Persians, but we'll see how much free time I end up having this weekend.  I'm envisioning them as the backbone of a "fiery sorcerer from the eastern deserts" type Dragon Rampant retinue, supporting an elemental-summoning sorcerer and backed by things like cockatrices or manticores.

The weather should be nice enough to prime this weekend too - I'm looking forward to painting these guys once the Challenge begins.
Posted by Bill at 6:58 PM