Frostgrave AAR: The Diabolists of Belphegor vs. Tom's (Yet Unnamed) Dwarves

Tom and I reconvened at long last (our last game was in August) for a friendly Frostgrave match, and being a little more comfortable with the rules, we agreed to begin campaign play against one another (and possibly bringing in a few other people; a store league would be something fun).  We gathered around my dining room table, rolled up a scenario, and set into it.

We ended up playing "The Keep," a scenario marked by a set of four teleportation pads located equidistantly around the center of the table, each with a treasure token to be had on it.  Stepping on one of these pads might send your figure to any of the other three pads.  I had four unused 2" round bases, which made perfect teleportation pads, and I picked up a baggie of blue plastic "gems" a while back to serve as treasure tokens.  The remaining two tokens were placed in the center of the table, as per the scenario. 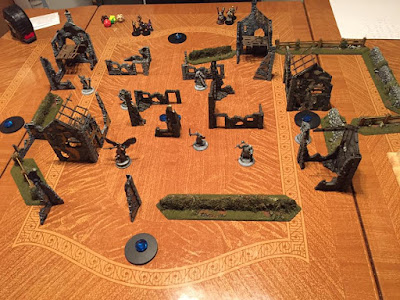 Tom was running an Enchanter warband, with two archers, two men-at-arms and two thugs; I had a Summoner band, with a knight, two crossbowmen, an infantryman, two thugs and a warhound.

We diced off to see who would go first, and I won the roll.  My wizard tried to cast Invisibility on my infantryman and failed to do so miserably, inflicted two wounds on himself from the failed casting.  My apprentice, meanwhile, successfully called up an imp, and one of my thugs stepped onto the closest teleporter and was sent to Tom's side of the table, where he managed to miraculously shrug off a volley from his archers and avoid injury at the hands of one of his men-at-arms before returning with a treasure.

The third turn is when things really started to heat up.  First, Tom's wizard vaporized my apprentice with a Grenade spell, and then my Summoner rolled a "1" while trying to cast "Summon Demon." This meant that a Minor Demon manifested behind him, very upset at being called into the cold, damp Material Plane.  The demon immediately attacked my Summoner, eviscerating him.  On the opposed fight roll, the demon scored a 22 and the wizard a paltry 4, meaning he went down and he went down hard.


So now we had two uncontrolled demons loose on the board, and all the closest figures for them to attack...were mine.  The Minor demon took down a treasure-laden Thug and a Crossbowman, while the Imp scored an incredible critical hit on the knight, one-shotting her into an early grave.  Unbelievable! I'm just picturing this little two foot tall imp screaming and catapulting itself into her face, clawing, biting and flailing about until it was either dislodged or hit something vital. 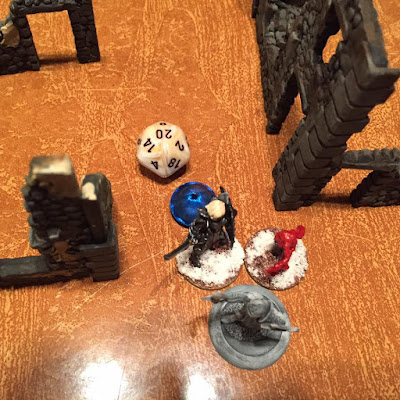 Tom was left with simply mopping up the board and collecting the treasure.  So Tom went up a level and collected enough treasure to not only set up shop in a base, but to add a giant telescope to the top of it.  I came out with 60gc, a grimoire containing the spell "Imp," and the lives of all my soldiers - seriously, rolling to see who lived and who died I rolled higher than I had all game.  One of my crossbowmen will have to sit out the next game but otherwise everyone is still in one piece.

All in all we had a great time, and laughed through the entire game.  Prior to the third turn, neither one of us could roll above a 10, from Turn 3 on, Tom's dice went hot; at one point he could barely roll under an 18 on the d20.  Meanwhile I kept rolling crap, but I was having too much fun to care.

Tom and I are thinking about trying to get a twice-monthly thing going at Just Games for Frostgrave to try and rope in some of the other interested potential-players; we've heard a lot from people who have the book and are interested but never quite get around to assembling a warband.

Additionally, Tom bought the two-player starter set for Mantic's Kings of War; while he's likely to put together a Skaven/"Ratkin" force, I'll be buying the undead figures from the starter set off him and putting together an army of skeletons.  I never got a chance to play Warhammer before it died (I could never afford to do so back in the day), but I've always been interested in games with big regiments of figures being pushed and wheeled around the table.  I've got some ideas for a "theme" to my army of the dead and I think it's going to be a fun project.
Posted by Bill at 7:01 PM