A Time to Harvest Session 11: The Doom that Came to Cobb's Corners

Here we are, at what is probably the penultimate session of this campaign.  Here we wrapped up Chapter 5, and Chapter 6, the final chapter of the campaign, is a fairly short one, and I doubt it will require more than a single session to complete, which means the next session, taking place on October 4th, will be the last session of "A Time to Harvest" with my group.  It's been a long strange journey, hasn't it?

When we last left our heroes, Perry and Roni had just laid down on alien operating tables, along with soldier Mack Hairpin, to await brain surgery at the claws of the Outer Ones.  Operating leisurely, the two Outer Ones deftly removed the top of Mack's skull and scooped his brain into a jar.  As they made ready to repeat the process on Perry, a third alien, buzzing and changing colors, entered the room.  Flashing and buzzing in response, one of the Old Ones ordered Perry and Roni to "remain where you are - there is no escape.  We will return momentarily."

As the three aliens left the room, Perry and Roni lifted the grate and jumped down into the same underground river that Randall had escaped into. 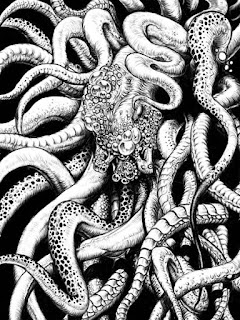 Making their way up to the isolated farmhouse they worked at, the Hoadley brothers spotted a trio of bodies floating in the river.  Fishing them out, they quickly discovered them to be alive - Randall, Roni and Perry.  Agreeing to work together to deal with the threat of homicidal children in town, and to rescue the Hoadleys' mother, who lives in town, the five headed up to the farmhouse to "requisition" a steam-tractor and supplies.  Arming up and hitching a wagon to the tractor, they head to town.

Cobb's Corners is, despite the rain, on fire, with people and tree-monsters silhouetted against the flames as they move back and forth.  Our heroes head first to the sheriff's office, which they find deserted, helping themselves to shotguns and a keg of black powder intended for the town's civil war-era cannon, fired every Fourth of July.

Heading then to the town square, they find the town deputy, naked, sacrificing people atop an altar made from previous sacrifices, flanked by a pair of tree-monsters, hooting in unison.  A third stands guard over a collection of prisoners, including the sheriff, the school-teacher, and the Hoadleys' mother.  Overhead, darker-than-black clouds swirl ominously.

Perry, Randall and Roni fired at the deputy, managing to pepper him with shot but not kill him immediately; Horace lept off the tractor, axe at the ready, to rescue his "momma" from the tree-monster; and as one of the hooting sentinels turned and lumbered towards them, Levi threw the tractor into gear and tried to build up enough steam to reach "ramming speed."

Horace sheared through the tree-monster's ankle (one of three, at any rate) and slid under the collapsing beast on his knees, coming out cleanly on the other side as it toppled, sending the prisoners scattering.  The steam-tractor rammed into the second tree-monster, and in its flailings it caught Perry with a tentacle and sent him flying twenty feet through the air.

Unfortunately, the deputy lived long enough to complete the summoning ritual; the sky dilated open and hundreds of thousands of tons of black, alien flesh, studded with pus-rimmed eyes, salivating, sphincter-like maws and uncountable tentacles, began pouring into our reality, vaster than any dinosaur or whale that had ever lived.  Three enormous legs, each hundreds of feet long, stretched down, planting cloven hooves ten feet deep into the earth, crushing buildings, trees, concrete, anything in its way.