Because it's not enough for me to tweak and improve my Summoner warband, right? I need a few more warbands as well.  I look at it as, if we're playing at the club and someone walks up and shows interest, I can hand them some figures and they can hop right in.

First up, the Choosers of the Slain, an Elementalist Warband: 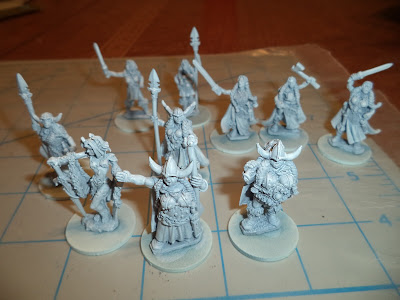 The Wizard is Reaper's Ice Queen, while the rest of the warband is composed of Wargames Foundry Valkyries. I bought the Foundry figures on sale last Christmas, and it took them a month and a half to reach me.  A couple of the figures were miscast as well, with not enough metal entering the molds - I had a couple girls whose swords stopped at the hilt, and one of my fat ladies is supposed to have a spear but ended up with a staff instead.  No matter, really; I salvaged enough to make up my force.  Honestly at that point I was just so relieved to have received them at all that I didn't want to deal with trying to ship anything back!

Also, I'm excited to get to paint a couple of well-fed Scandinavian ladies.  Outside of Hasslefree, there aren't too many "plus-sized" female figures on the market.

Next up, the Cult of Set, which will be a Witch warband: 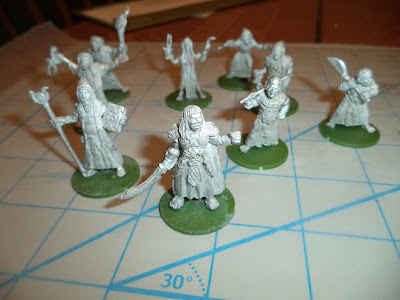 These figures are all from Dark Fable - I backed their recent Cult of Set kickstarter and got a couple packs of cultists and, as a returning backer, was entitled to a figure that was quite obviously James Earl Jones' character from 1982's CONAN THE BARBARIAN, slightly Egyptian-ized.  He'll be my Wizard, with a cultist holding a book and staff as his apprentice.  The other Cultists will be Thieves, and I bought a pack of Eunuch Guards to give me my Infantrymen.  I still need to get an Archer of some description to round out the band and finish off my points, but I haven't decided on a figure yet; nothing in Reaper's lines is really jumping out at me, it's a bit too pricy to order a pack from Dark Fable for a single figure, and I'm waiting for Crocodile Games' Archer Captain to come back into stock.

So if anyone out there has an extra Egyptian archer in 28mm they can part with, I might be willing to take them off your hands :)

These figures all came with 20mm plastic "slotta bases" - which I utterly can't stand, because the tabs never fit into the slots well at all.  I recently bought a lovely set of sprue-cutters and they clipped the tabs off these figures' feet like it was nothing at all, allowing me to glue them to my preferred Renedra flat plastic 25mm round bases.
Posted by Bill at 4:15 PM