The Painting Bench, an Update

Well, with the announcement having been made for the 8th annual Analogue Hobbies Painting Challenge (in which I will be participating), I thought I should show off some of what's been coming off my project list lately:

First up, "Edgwick and his Hounds," a unit of Lesser Warbeasts for my "Men of the West" army for Dragon Rampant.  These guys still need a dusting of meadow flock added to their bases, and I'm not super in love with how the dogs themselves came out, but they'll do for now.  Edgwick himself is a Crusader Warlord from Gripping Beast, which they threw in as a bonus figure with my last order, while the dogs are Reaper Bones. 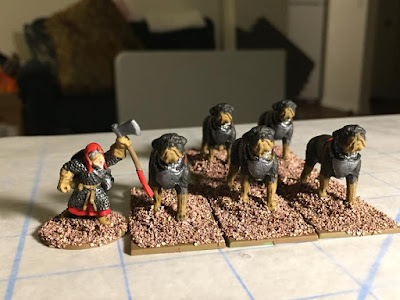 Next, "The Howling Hordes of Bakarath," A Reduced Model Unit of Bellicose Foot which may or may not end up with the "Cause Fear" rule applied to them, for a "Dark Lord's Evil Coalition" army for Dragon Rampant.  The idea for this army being it's humans, goblinoids and demons, held together by the power and charisma of a villainous warlord; these Reaper "Bakarathi" demons certainly look Bellicose! These are older metal figures from Reaper, from the 02100s and 02200s line, and now I think they're in the 03600s.  A "98" was scratched onto the bottom of a couple of them, telling me they were sculpted 19 years ago.  I've glued a few Wargames Foundry shields and a cut-down Reaper Bones skeleton warrior to a couple of the bases. 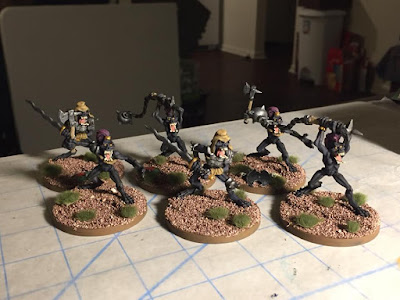 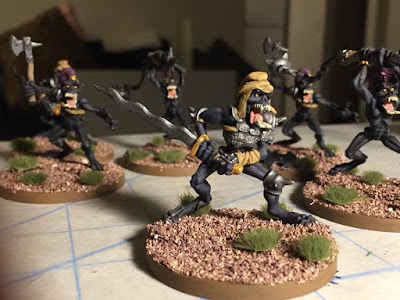 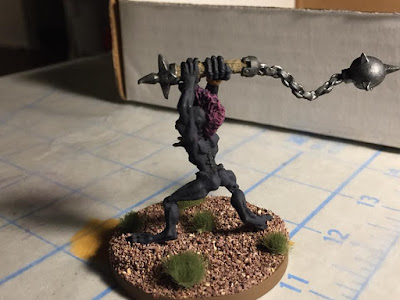 Next, another unit for my "Men of the West" army, a Reduced Model Unit of Heavy Foot with an attached Wizardling.  The spearmen are Conquest Games' plastic Norman warriors, of which I'd ordered a couple sprues.  These went together nicely enough, though I had some problems with their two-handed axes, as you'll see in a minute.  These are still a work in progress; the red needs some touching up on their tunics and shields, and of course the bases remain to be finished.  Accompanying them is "Diva, the Blessed," one of the limited-edition figures Reaper has put out this year to commemorate their 25th year in business.  Like Edgwick and his Hounds, her base just needs a dusting of meadow flock to complete it. 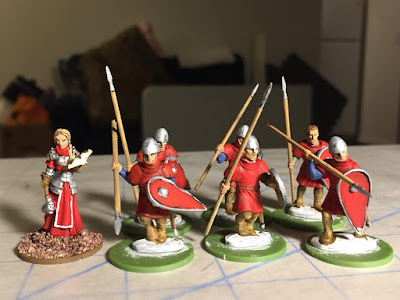 Following them we have the Black Prince himself, leader of the Evil Coalition army, accompanied by his beloved pet scorpion.  For Dragon Rampant purposes, he is a Single Model Unit of Elite Foot.  I think he's pretty much done except for his base and the leather bits on his armor.  I like how his cloak came out.  Both figures are Reaper metals. 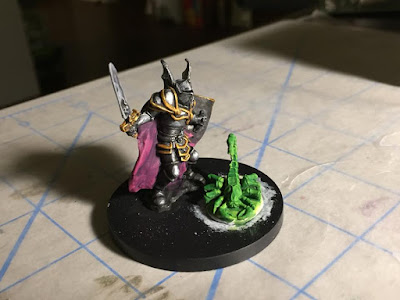 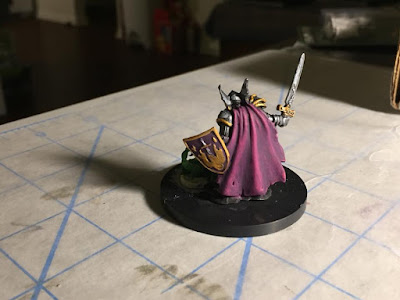 Finally, we've got the King's Guard, a Reduced Model Unit of Offensive Heavy Foot who will be replacing a set of Bones figures that I was never super happy with.  These will be paired with King Denethall, leader of my "Men of the West" army, and are again Conquest Games' Normans - made using the more heavily armored bodies on the warriors sprue, as well as the two bodies on the command sprue to create a sergeant and standard bearer.  I ended up with some significant gaps where the right arm meets the torso on two of the axe-men (I suspect that some weapons fit some torsos better than others) that I'm going to need to putty up before I can get painting. 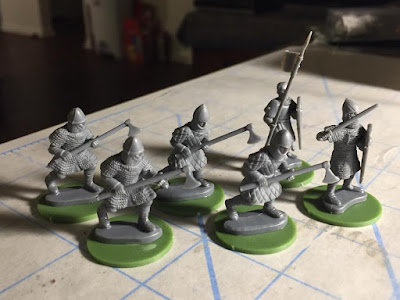 Overall, I'm pretty happy with everything, caveats as noted above.  I'm liking the Conquest figures enough that I'm considering getting a couple archer sprues to replace my Reaper Bones bowmen in this army, and adding another box of Normans when I get around to building a second 24 points of "reinforcements" for this army.

Next up, however, is going to be the first 24 points of the Black Prince's army; I've pre-ordered a box of "Oathmark" Goblins from North Star, which will produce two units of Light Foot and a unit of Scouts, as well as a box of Fireforge Games' Medieval Russian Infantry, which will serve as humans marching beneath the Black Prince's banner a la Tolkien's Easterlings serving in the armies of Mordor.  Fireforge provides enough spear-arms for the box to produce two units of spearmen, but not enough swords, axes, maces or bows to produce any units with them.  I've got a ton of Fireforge crossbow arms in my bits box from last year's Ordenstaadt project, I may convert a dozen of these soldiers into crossbowmen.  I am going to have to find some replacement shields for the ones I do arm with spears though...

The Goblin Scouts are being saved for inclusion in the second 24 points "reinforcements" list for bigger games.  Overall, however, I think the contents of those two boxes - a total of 55 figures - will form the core of my Painting Challenge entry this year.
Posted by Bill at 5:02 PM