First things first, I am king of the idiots.  I had pulled the folder containing everyone's character sheets from my backpack between sessions 17 and 18 to look up something in one character's inventory, and then failed to put the folder back into my pack.  Thus, I showed up for Session 18 without anyone's character sheets; given that it would have been a half-hour of everyone else's time wasted for me to drive home, get them, and return to the store, we elected to free-form this shit.

With the Demogorgon cult extinguished, the party celebrated by feasting on Bawss Hawg, slow-roasted in honor of Kholark's victory over the giant pig, and Kholark himself received all four of Hawg's tusks as a trophy.  Jaeger took Lord Vesper's ornamental saber and broke it, creating the new sign for Cor's new Broken Blade Inn, on which construction soon began.

In the morning, there was the issue of the Red Brotherhood to address.  While a number of the mercenaries had been slain in the fierce fighting the day before, there were still more of them then there were town guards.  With officers and NCOs sequestered in the dungeons under the castle and the rank and file disarmed and placed under guard in a makeshift prison camp, Ariska the Red Witch (now the de facto ruler of the town by popular opinion, supported by the sheriff Edras and bailiff Borut) asked the PCs their ideas regarding what be done with the Brotherhood.  Turning them loose would just result in there being a large camp of brigands just outside of Craghold, it was swiftly realized.

Interviewing the prisoners was a lengthy process, but turned up some interesting information; Sir Dorian had begun approaching his officers about joining the Demogorgon cult, suggesting it to them as means of greater personal power and of swifter advancement within the Brotherhood.  Additionally, a percentage of the rank and file had come to the conclusion that they didn't need to hold any sense of loyalty to a dead commander, and were willing to hang up their red cloaks and join the City Guard of Craghold.

Turning this information and their own suggestions over to Ariska, the party was a little shocked when she coldly called for the officers as a whole, and any soldiers who refused to join the City Guard, to be hanged outside of town.  Reasoning that if they were set free and became brigands, they would have to be hanged anyways, Ariska decided that it was the solution that best fit the safety of Craghold.

With that out of the way, the party took advantage of the discount the town was offering them for being heroes to get some shopping done.  Mivahl purchased a morningstar to replace the flail he'd given to Kholark, and Jaeger, Dormammu and Sylvus found the local leatherworker to get some new leather armor made.  The tanner, a half-orc named Elgar, made an immediate impression - gruff, perfectionist, a craftsman who took pride in his work and expected his customers to take pride in what they bought from him.  Sylvus was nearly thrown out of the store for walking in wearing a dirty, badly-tanned wolfhide, and Elgar gave Jaeger a bit of an education on the realities of boiled leather as an armor in response to being shown Jaeger's sketches of what he wanted.  Appreciating a customer who knew what he was after, however, Elgar went through the sketches and explained what he could do to give Jaeger what he wanted - leather armor that would allow for increased flexibility and range of motion in combat without sacrificing protection.  Mollified, Elgar even agreed to produce a new, better quality wolf-hat for Sylvus. 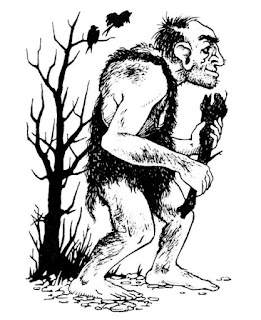 Waiting on production of the armor and taking care of the issue of the Red Brotherhood kept the party in town for a week after the death of Lord Vesper.  Finally setting out for Molekh on the 23rd of Rainmont, the first day of travel through the mountains proved easy until they neared the border of the desert; waiting for them at the end of the road was a pair of Hill Giants.

"Toll collectors!" one of them bellowed.  "Gotta pay da toll ta cross da desert.  Toll is every coin and shiny jewel ya got!"

"Yeah!" the other chimed in.  "Give us yer cash, or yer heads we will, uhhhh," he squinted at the script written on his palm, "Smash! Yeah!"

"We already paid," Dormammu bluffed, sending the giants into a huddle of confusion.  Jaeger and Mivahl, eyeing the bulging and jingling sacks tied to the giants' belts, recognizing that even if they got past the giants unscathed via deception, the giants would continue to prey on others.  Kholark had his hand on his flail, ready to crack some heads (even if those heads were fifteen feet off the ground).  Lasair whispered to Mivahl and Jaeger that she'd follow their lead.
Posted by Bill at 7:08 AM