When we last left our heroes, Cor was working with a cordon of guards - both regular town militia and the elite soldiers of the Red Brotherhood - to secure a perimeter around the House of Pavel, now known to be the lair of diabolical cultists.  Paired with a Brotherhood soldier named Desrick, a large, placid-looking man, Cor found in him an appreciative admirer.  Unfortunately, a pyrotechnic blast from one of the windows of the House of Pavel caused Desrick to say, "Well, there's the signal.  I'm sorry to have to do this..." drawing his short-sword.

The rest of the group was inside, where they discovered - they thought - Lady Erzebeta about to sacrifice one of her step-daughters to the Demogorgon as Sir Dorian, commander of the Red Brotherhood, looked on expectantly.  An arrow from Lasair dispelled the illusion, and Sir Dorian (not an illusion) ordered the two guards present (also not an illusion) to attack.

Dormammu's entrance was cut short as he passed the threshold and a pair of crossbow bolts struck him - the real Julia and Wanda, Lord Vesper's teenage daughters, were using a pair of raised choir boxes in this desecrated temple to turn the floor below into a shooting gallery.  He fell, but was soon back on his feet thanks to Flora.  Sylvus, still in wolf form, charged Sir Dorian, as did Kholark.

As the battle raged, it occurred to the party - "Where did Vesper go?" His half-elven eyes piercing the gloom of the balcony between the two heads of the Demogorgon painted on the wall, Dormammu saw Lord Vesper and Lady Erzebeta watching the battle with glee.  He called out his discovery to the party.

Stepping into the flickering carmine light, Vesper announced, "Did you not suspect that a Cult of the Demogorgon would itself have TWO HEADS? All would have been fine if you'd just done as you were supposed to and killed that troublesome Red Witch.  Ah well.  Take my secrets to your graves."

He cast Cloudkill on the party, including the still-living Sir Dorian and his men. 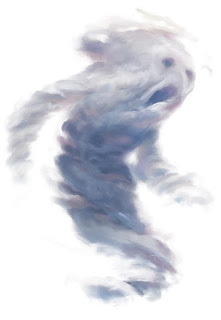 Before too much damage could be done by the poisonous cloud, Flora cracked the Elemental Gem of Air that the Red Witch had given her, directing the summoned Air Elemental to funnel the poison gas out of the room and back up towards the balcony.

Flora then caught sight of a towering, unholy creature shambling towards her through the thinning fog, and screamed - but either an arrow from Lasair or an Eldritch Blast from Dormammu [DM's Note: I honestly forget which, and nobody sent me notes this week] shattered Erzebeta's concentration, revealing the creature to be an illusionary Phantasmal Killer.

Jaeger had the Air Elemental throw him at the balcony, but failed to catch the railing, falling 20 feet on to a descending staircase below.  With Sir Dorian and his men dealt with, Kholark raced to those same stairs, and together he and Jaeger found a way up to the balcony, while the Air Elemental simply floated up.  Lady Erzebeta was thrown thirty feet horizontally out from the balcony, while Lord Vesper took a pounding from whispy, unseen fists.  Kholark smashed his flail down on Vesper again and again, and Jaeger, seeing the old man clinging to the barest threads of life, picked him up and PILE-DRIVERED HIM OFF THE BALCONY.

Seeing their father and step-mother (and fellow cultists) dead, Wanda and Julia opted to kill themselves rather than be taken prisoner, much to Lasair's dismay.

Meanwhile, Cor killed Desrick with his dagger and quarterstaff, and looting the body, retrieved some gold and a platinum ring that was too small for Desrick's fingers.  He quickly identified it as a Ring of Protection.

The death of Vesper caused the mouths of the painted Demogorgon to open and bellow in stereo "NOOOOOOOOOOOO!" temporarily deafening Mivahl and Kholark.  The sonic boom also blew out all the windows, causing enough confusion outside for the town guard to overpower the Red Brotherhood and bring them to heel.

Searching Lord Vesper's body, Jaeger came away with an elaborate cloak pin of gold and obsidian - identifiable as a Scarab of Protection.  He also claimed Sir Dorian's single-edged, basket-hilted sword for himself.

That night's scheduled pig-roast proved far more celebratory than originally planned, as the city celebrated the removal of the Demogorgon Cult.  Ariska the Red Witch was called upon to replace Lord Vesper as the ruler of Craghold.

In the morning, a delegation of Hobgoblins arrived, asking for the group.  Zerin, their former companion turned leader of New Dawn, had informed Borgai, Khan of the Hobgoblins, of the party's successful capture of the lance known as the Empyrean Vengeance.  The leader of the delegation demanded that the party turn the lance over to him to deliver to Borgai, which Mivahl gladly did.  With a bow, the hobgoblins withdrew, riding back into the desert from whence they came.

With that, Cor announced his retirement from adventuring, settling in to run an inn and decode the iron-bound Book of Skelos.  The remainder of the party, giving a fresh ear to rumors, decided on their next course of action - they would return to the city of Molekh to claim their reward from Borgai Khan for finding the lance, and then turn their attention back to the Groaning Keep, eager to avenge themselves on the undead knights contained therein.
Posted by Bill at 5:48 PM