After a week off, we're back with D&D.

Arriving at the Golden Castle and its attached village, they discovered it to be misnamed; the "Castle" is a refurbished Imperial watch-tower of a style not built in 50 years, the village is a dirt-poor hamlet of goat-herders, and the town guards are all basically the Squeaky-Voiced Teen from The Simpsons, poorly trained and overwhelmed by their positions.  The only tavern in town, The Triumphant Hare, could offer only cots and blankets in the common room for the night, with it being a toss-up whether the ale or the vegetable broth was more watered down.  Only the Cathedral, built by the stone giants Lithotomos and Petroikodromos, is in any way impressive, though questionable in its own way - the holy symbol worn by the acolyte priest they talk to, and hanging on the building itself, they realize are displayed upside-down.

Undeterred, Cor talks to first the innkeep, Egil, and then his overbearing and shrewish wife, Endora, 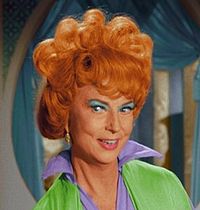 about the possibility of partnering with them and investing in the Hare, to help support the anticipated growth the town is hoping to see due to the new cathedral.  While Cor's bargaining is ineffectual, Dormammu turns on the charm and leaves Endora red-faced, flustered and giggling, agreeing to the deal.

Asking around, the party quickly forms a pretty good image of Count Rodrigo - that he's a selfish, vainglorious man, eager to avoid personal danger while claiming the glory of those who don't flinch from it.

Calling on Francis, his imp familiar, Dormammu uses the tiny devil to spy out the Golden Castle, watching Count Rodrigo undress for bed (kinky...) and observing the Count's spiritual advisor, Father Markus, searching through books in the library.  Sylvus, meanwhile, has Wildshaped into a cat and snuck into the castle, being mistaken for one of the castle's rat-catchers, and listened stealthily at a door, hearing two male humans, and an unknown, grating, inhuman voice arguing.  The inhuman voice commands, "I don't care for your excuses, I want that lance! Find the Empyreal Vengeance and find it NOW!"

Francis gets nervous, because the entire second floor of the Castle smells like Demon, and not a wimpy Quasit or simpering Dretch, something big and powerful.

Reconvening, the party assembles and digests this information, coming to the conclusion that Father Markus is the power behind the throne, and wants the lance for some nefarious purpose.

Debating on a course of action, they finally agree to present themselves, in their guise of travelers and cartographers, to the Count, assess him and Father Markus firsthand, and figure out where to go from there.

In the morning, the group cleans up as best they can (Sylvus still looks like a crazed homeless person), and present themselves to the "court" of Count Rodrigo the Black.  The Count is sitting resplendent in a chair that, in the Principalities, counts as a throne, flanked on his right by Father Markus, and attended by four guardsmen.


As the Count launched into a recounting of how he single-handedly slew the Stone Giant Petroikodromos, complete with wild thrashings of his rapier, they realized their assessment was correct.  And it dawned on Zerin, Mivahl and Sylvus (confirmed by whispered comments between them) that they could easily take down everyone in the room.

"NOW!" yelled Mivahl, raising his hand and summoning his flail to him; Zerin charged Father Markus, grabbing him by the collar with one hand and holding his sword to the old priest's throat, while Sylvus cast Hold Person on Count Rodrigo, transforming into a wolf to ensure that the petty despot didn't move a muscle.  One of the four guards panicked and fled the room, while the other three, spears raised, advanced cautiously on the group.