Lest anyone thing I've abandoned miniature painting for strictly running RPGs, I have been slowly but steadily puttering away at a pair of demo armies for Osprey's Dragon Rampant - the undead "Legion of Nesuahyrrah" and the stalwart "Men of Sabaton."

The fiction I've got in my head has Sabaton as a frontier province, rough and barely-claimed, the Baron and his soldiers working tirelessly to tame and civilize the region and bring it into the Empire.  They don't have enough men, they don't have the best armor and weapons, but they've dug in their heels and refuse to give an inch.  Most of the figures are Reaper "Anhurians," a pseudo-Norman bunch wearing chainmail shirts and open-face helms with nose-guards.

I've previously shown the Baron and his bodyguards: 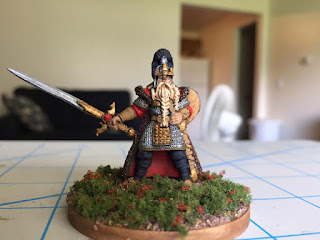 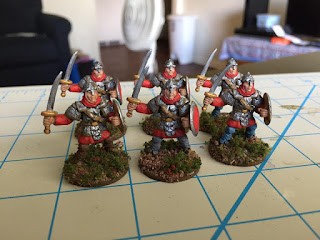 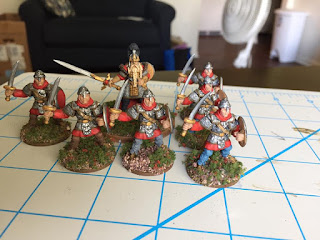 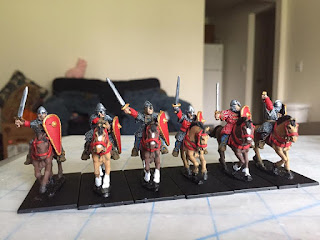 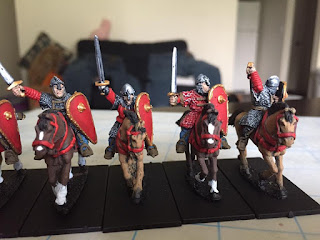 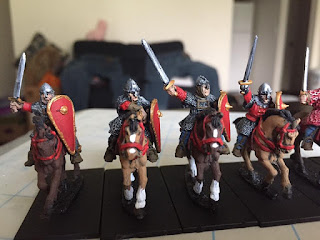 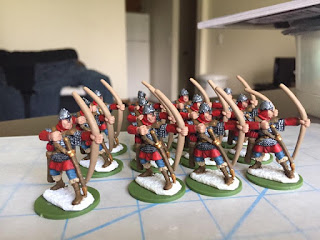 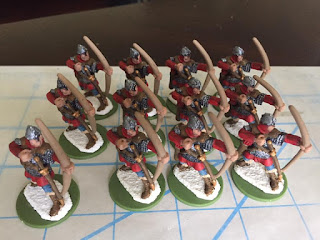 Both of these units were slow-going and a bit of a pain.  I think I must not have cleaned the mold grease off these bowmen well enough, something I'm usually very careful about.  The paint has not wanted to stick to the plastic and took every opportunity to pull away from the material.

As for the riders, both men and horses had a TON of excess metal to be trimmed off, especially between the horses' legs.  My can of spray primer was running low too, so the horses especially ended up with a little bit of a spotty coat - especially in the creases of their manes and tails, primer just didn't end up there.  So I had to go over each figure with black paint by hand afterwards.  One of the riders had lost his hand in transit, and I clipped a plastic hand off a Fireforge knights sprue to replace it.  Throughout the painting process I was constantly finding more little bits of excess metal or mold lines that I had missed at every prior point.  Very frustrating.

I'm not a fan of painting horses in the first place (not sure why, they just irritate me to do) so this might be my last cavalry regiment for a while.  I have two more units to do for this army - a unit of Anhurian Spearmen (with an attached priestess providing some magical support) and a unit of war dogs.

Moving on to the Legion of Nesuahyrrah...

These are the undead legions of the Lich Nesuahyrrah, an ancient undead spellcaster.  I imagine the Lich ruling over a swath of territory that the Men of Sabaton are now trying to exert influence over, and he's not having it.  Calling up the bones of long-dead warriors, Nesuahyrrah strikes and strikes hard to reinforce his sovereignty.

(of course, "Nesuahyrrah" is "Harryhausen" backwards, in tribute to the late, great Ray Harryhausen, who animated so many memorable monsters for the silver screen, not least being the seven skeleton warriors in JASON AND THE ARGONAUTS)

I've previously shown off Nesuahyrrah himself, as well as the unit of Wraiths he commands. 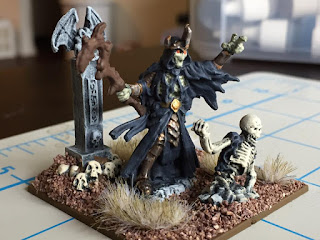 Joining them now is a unit of Skeleton Berserkers, armed with big two-handed swords and axes. 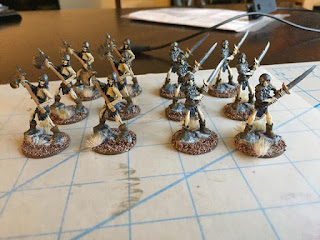 I have one more unit to paint for this army, at least in its initial 24-point form, and that's a unit of Skeleton Warriors with swords and shields.  I anticipate adding more skeletons to it in the future, either for larger point games or to sub in place of the Wraiths - which make up a full third of the warband, points wise, being classed as Heavy Riders (for hitting power and speed), with the Fly and Cause Fear fantastical rules added on.  This is, understandably, a big investment in a single unit, so there are going to be games where I just want to have an extra 24 skeletons in their place and overwhelm opponents with numbers.
Posted by Bill at 5:48 PM