As the Gorgon emerged blinking into the sunlight on the far end of the arena, the adventurers swiftly arranged themselves, spread across the width of the arena to minimize the damage the creature could do.  Cor threw out a minor illusion of a goblin bouncing around in a red cape, hoping to distract and delay the creature.

The Gorgon proved to be grossly outmatched by the adventurers, especially once Dormammu cast “Dissonant Whispers” on it, causing it to run headlong into a wall.  Lasair finished the creature, burying an arrow to the fletching in the bull-like monster’s heart.

The crowd of hobgoblins in the stands went wild, with Borgai Khan, Great Khan of All the Hobgoblins, declaring that the Gorgon was to be roasted and served to the adventurers at a feast in their honor.  Two enormous casks of ale were then rolled up on either side of the Khan, and with a jeweled mace, he knocked the bungs off both of them, sending sharp, bitter ale cascading into the arena over the adventurers.

The feast was a wild affair – in addition to the Khan and the adventurers, present were various priests, sorcerers and advisors to the Khan, members of his immediate family, as well as Erdo and the soldiers under his command.  Kholark presented the Khan with a cask of whiskey from the Shrine of Bormo, and then the party really went wild.  The last thing Mivahl remembered before blacking out was Vekra, the hobgoblin warrior woman whose advances he’d previously rejected, suplexing him through a table.

Standing up, Kholark challenged the Khan to a friendly wrestling match, which the Khan accepted by crushing a pewter goblet between his pecs.  The fight was brief but memorable, with Kholark quickly pinning Borgai Khan for a three-count. Helping the Khan back to his feet, and Borgai seized Kholark’s wrist, raised his arm, and declared Kholark a brother.

In the morning, Mivahl woke up with two black eyes and a number of bite marks, to the sight of Vekra putting on his championship belt.  “I think I earn this last night, yeah?” she grunted lasciviously.  Nursing a massive hangover, the Khan summoned the adventurers before him with a proposal. 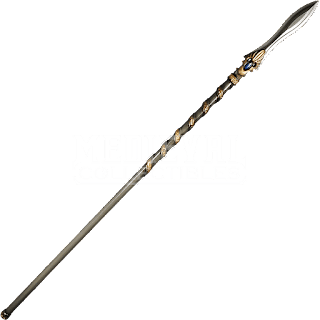 The Golden Castle, nestled amidst the peaks of the Mountains of the Moon, is built atop the crypt wherein is stored the Empyrean Vengeance, an enchanted lance, forged by spirits of violence and bloodshed, the children of a god of war so ancient that its name has been forgotten even to the memories of dragons.  The current ruler of the Golden Castle, Count Rodrigo the Black, is thus the current protector of the lance’s resting place.  If the adventurers will steal the Vengeance for Borgai Khan, they can ask any boon they like from him in return.

The four-day journey to the Golden Castle is largely uneventful – two horse-sized scorpions fall quickly to the party, with Kholark taking a spearhead-sized stinger to the chest without flinching.

A few hours from the Golden Castle, the party is accosted by a stone giant that identifies himself as Lithotomos.  Upon ascertaining that the party are not friends of Count Rodrigo, Lithotomos tells his tale of woe; his brother Petroikodromos and himself were hired by Rodrigo to build a massive cathedral, the finest in all the Principalities.  The task was completed, but when payment came due, Rodrigo refused to pay.  When Petroikodromos protested this, he was killed by Rodrigo’s men and hung over the city gates as a warning.

Lithotomos asks the party if they will help him seek vengeance against Rodrigo for his betrayal of the brothers’ trust and the murder of Petroikodromos.  The party agrees, seeing in Lithotomos their opportunity to steal the Empyrean Vengeance. 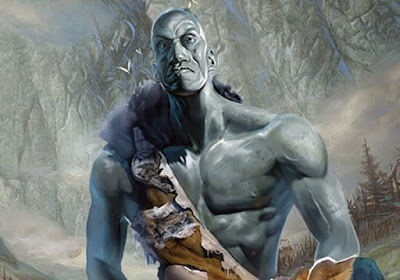