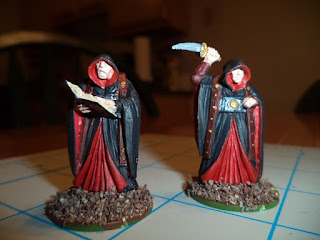 Belphegor, Wizard of the Black Ring, sighed and waved a thin, bony hand.  Uttering a few words in a language most men would blanch to hear, he tore open a small hole in the Material Plane, from which emerged a small, unctuous demon of the variety commonly called "imps."

"Hail, Belphegor, Master of -" the imp began, before being cut off with a wheezing gasp as it was impaled through the back, gigged like a frog by Oriax, Belphegor's apprentice.  The younger man smiled behind his cowl, and held the still-squirming demon over the glowing coals of their fire.  Foraging for supplies amidst the ruins of Felstad had proved fruitless, and Belphegor was forced to rely on sorcery to conjure meat for his band of mercenaries and cut-throats.  Eating the flesh of demons seemed to have done the men little harm, though the knight Barbatos' skin had turned an unearthly shade of red and he had grown horns and a tail; likewise, the warhounds Belphegor had purchased now sported horns and tusks, their skin red and hot to the touch.  But it was of little matter.

The crunch of booted feet on the snow outside sent every hand to a sword-hilt; when the wool blanket strung up as a curtain over the ruined wall pulled aside to reveal the florid face of Big George, one of the tavern-brawlers, the crew of mercenaries relaxed as one.

"What news from your scouting trip, George?" Belphegor said quietly, drawing his cloak more tightly around himself and, instinctively, feeling for the weight of the iron-bound grimoire at his hip.

"A new warband enters Felstad," Big George said, catching his breath.  "Dwarves.  Big beards, smelled of lager. Not more than ten of them."

Belphegor stroked his chin.  While he wasn't certain Big George could count higher than ten, he liked the idea of being able to get the drop on an unprepared, untested warband.  Maybe they had supplies he could help himself to.  He surveyed the motley crew of hellions in front of him, mentally calculating the strengths and weaknesses of each.

"Mademoiselle Zenith, Black Phillip, Big George, Johnny Seven-Fingers, Bull and Ace.  You will accompany Oriax and myself into Felstad.  We're going to give those dwarves a proper welcome to Frostgrave."

The shaven-headed albino woman looked up from polishing her sword and grinned wordlessly, her teeth glinting red in the firelight, and the goat-headed half-man bleated greedily, eager to gorge himself on the steaming entrails of fallen foes.

Belphegor stood, stretched, and winced; the bitter cold of Felstad did his rheumatism no favors; why couldn't it have been the sand-swallowed city, bleached under an unforgiving sun?

I have a Frostgrave match coming up next week - a rematch against Tom, who I played with awhile back using two warbands I'd painted.  Tom's got his band of dwarves ready and the free time in his schedule to devote an evening to gaming, so we made plans for Wednesday night.

When I got home from work, I took a look at my warbands, thinking about which to bring to bear, and I decided I'd take the Diabolists of Belphegor out for another spin.  I'd tweaked the army list a little bit since Tom and I's last go, and I tweaked it a little bit more tonight.  I think I've got a fairly well-balanced force that can deliver a beating to Tom's dwarves.

I've got one new figure to paint this weekend, and I'll be sure to take pictures at Wednesday's match.
Posted by Bill at 6:03 PM