Cthuesday: The Reptiles of the Nameless City 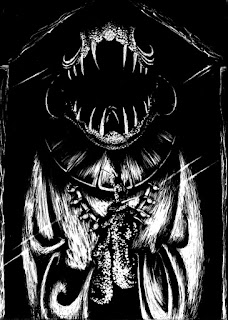 "To convey any idea of these monstrosities is impossible. They were of the reptile kind, with body lines suggesting sometimes the crocodile, sometimes the seal, but more often nothing of which either the naturalist or the palaeontologist ever heard. In size they approximated a small man, and their fore-legs bore delicate and evident feet curiously like human hands and fingers. But strangest of all were their heads, which presented a contour violating all know biological principles. To nothing can such things be well compared - in one flash I thought of comparisons as varied as the cat, the bullfrog, the mythic Satyr, and the human being. Not Jove himself had had so colossal and protuberant a forehead, yet the horns and the noselessness and the alligator-like jaw placed things outside all established categories. I debated for a time on the reality of the mummies, half suspecting they were artificial idols; but soon decided they were indeed some palaeogean species which had lived when the nameless city was alive. To crown their grotesqueness, most of them were gorgeously enrobed in the costliest of fabrics, and lavishly laden with ornaments of gold, jewels, and unknown shining metals." - H.P. Lovecraft, The Nameless City (1921)

This story is most noteworthy for being the first reference to Abdul Alhazred, the Mad Arab, and his "curious couplet" that all Lovecraft fans know by heart: "That is not dead which can eternal lie, yet with strange aeons even death may die." Here, the phrase is applied to these strange reptilians that are entombed in this lost, nameless city deep in the least-accessible regions of the Arabian peninsula.  While the narrator of the story at first encounters mummified versions of the creatures encased in glass, the crowning horror is when, from the depths of the underground city, he is swarmed by a half-transparent mass of creatures not precisely like the ones encountered under glass, but at least close cousins.  I've seen these half-transparent versions described variously as the unquiet ghosts of the mummified creatures, or as pigmentless, cave-dwelling descendants.  Personally, I prefer the latter, and Chaosium has graciously provided stats - first in, I believe, the first volume of the Keeper's Companion, and later in the Malleus Monstrorum - for a physical encounter with the Nameless Reptiles.  To the best of my knowledge, the only adventure they appear in is "Nameless City, Nameless Terrors" in the book The House of R'lyeh, where they appear strictly as ghosts.

If you want to tie these creatures into real world mythology, take a look at the Zuni Emergence Tale.  In it, a pair of culture heroes lead humanity out of the darkness of a series of underground worlds, eventually emerging to the surface.  Here, humans are dismayed to discover they have scales, tails, horns, and webbed hands, which the culture hero removes over the next few days.  What if the Nameless Reptiles are these "First Men" the Zuni myths speak of? Ancestral horrors are a staple of Lovecraft, after all.

Spells: None, normally (my emphasis)

What, then, are we to do with these Nameless Reptiles? How do we put them into a scenario? I think the easiest way is to substitute the Nameless Reptiles in for the Serpent Men or David Icke-style Reptilians (same difference, really) in a scenario. Think about it – the Nameless Reptiles have been around since 250 million years ago, give or take; give them a long racial memory or a Great Race of Yith-style library and they could easily have access to whatever knowledge they need to become big-time behind the scenes power brokers in the modern day. Imagine the players’ surprise when they track down and finally confront the “big boss” behind an insider trading (or organ trafficking) ring, and it’s a five-foot horned crocodile in a tailored Armani suit! This is a fantastic bait-and-switch to pull on veteran players who are expecting Serpent Men as well.

While the stat block says Nameless Reptiles normally don't know spells, I absolutely would give a few to a leader or high-priest.

Spells like “Cloud Memory,” “Consume Likeness” and “Mental Suggestion” could be very valuable to a Nameless Reptile in this sort of scenario. For that matter, take a page from Ken Hite’s Madness Dossier – maybe the Nameless Reptiles have access to the memetic control-phrases coded into human language and can reprogram a human psyche with a few well-chosen words. Either they have this by dint of having enslaved the earliest protohumans and having done the memetic coding themselves (and if you want to tie this deeper into the Madness Dossier, there’s always the sirrush, the odd, horned reptile that appears in Babylonian art) or they’ve scavenged the knowledge out of the ruins of an Elder Thing city.

(As an aside, I’ve been working on an Elder Thing-centric scenario using this sort of memetic command and control; it’s easy to see the Elder Things as “good guys” in the Mythos, but really, it’s just a matter that their self-interest doesn’t conflict with our existence…for now. Humanity is a product of Elder Thing science, or at least a byproduct, and I bet those command phrases designed for Shoggoths work pretty well on us too.)

If you want a more bestial take on the Nameless Reptiles, maybe take a look back to my connection of them to the Zuni Emergence Tale. If that story is taken as true, then the Nameless Reptiles are those who turned away, who refused to follow the rest of humanity out of the underground (a portal to another dimension, perhaps?) and maybe they resent us for what we’ve become – or for what they failed to become. With more savage versions of the Nameless Reptiles, a great way to end the scenario is to take the ending from the story – a horde of the creatures in hot pursuit of the investigators!
Posted by Bill at 2:16 AM