I may, in fact, be dating a large cat in a human costume.

Yesterday she upped her game substantially - I was cooking dinner when she brought the mail in, and so I got a fleeting glimpse of a package wrapped up in paper and tape.  Afterwards, when I inquired about the package, she claimed to have no idea what I was talking about, that there had been no package - just a bunch of junk mail.  I know I saw it, I insisted, and she continued to insist I was imagining things.  Finally, I'm half-frantic because she's got me convinced I'm hallucinating, and she says, "Go get your laptop, you'll feel better."

I went and actually did the dishes to try and calm my brain down.  Dishes done, grabbed my laptop, went back to the bedroom...and there was the package, sitting on my side of the bed.

Yep, definitely dating a large cat in a human costume.

Opening it revealed it to be my prize from Ray's million pageviews giveaway at Don't Throw a 1 - a set of 28mm Byzantine cavalry.  Careful inspection revealed ten cavalrymen and horses, and five figures on foot. 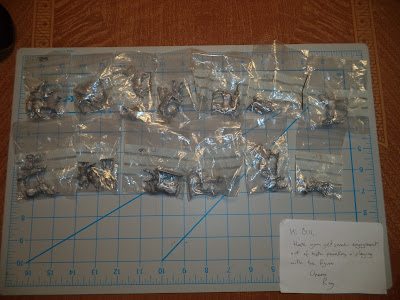 One figure has me a bit baffled though - I'm no expert on Byzantium, but the fellow below doesn't look like he fits.  Maybe he's supposed to be a Varangian guardsman? 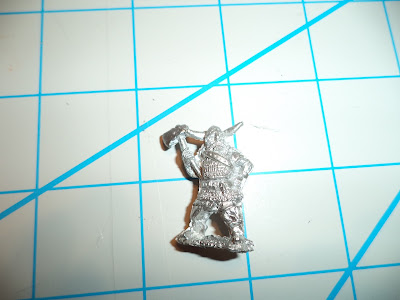 Either way, many thanks to Ray for this.  After announcing me as a winner in his giveaway, I emailed him and let him know I didn't expect him to ship trans-Atlantic, and if the cost of shipping was an issue I'd be more than happy with a simple "hail fellow, well met." Ray thus went above and beyond and his kindness and thoughtfulness are appreciated.

Now, to repay...I wonder if I can smuggle a bottle of Dinosaur BBQ sauce through the postal service and customs?
Posted by Bill at 3:22 AM