I got another crew done for Fistful of Lead: Galactic Heroes; a Flash Gordon stand-in and some supporting soldier-types.  Figures are from Killer B Miniatures' Retro Sci-fi line, and nice chunky sculpts that paint up beautifully. 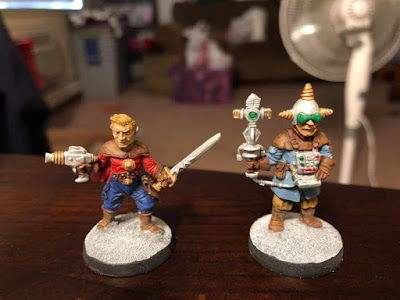 These first two are "Captain Gamma, Bare-Headed," and "Dr. Corvus Libra, Master Inventor," who will be the Leader and Specialist of the crew. The wand-like item held by Dr. Libra is going to count as some sort of special weapon.  Both of these are Bob Olley sculpts and were an absolute treat to paint, though now I see I missed a strap on Captain Gamma's left thigh. 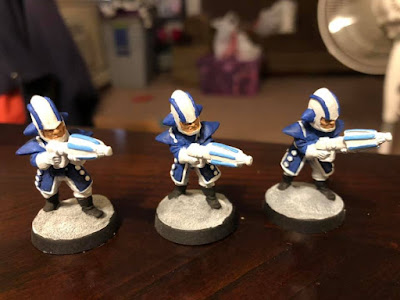 Next up a trio of "Lost Legionaires, Firing" - I'd flipped a coin to determine whether their uniforms would be red with white trim or blue with white trim, and blue won.  I realized halfway through that the blue coats, white trousers and black boots gave them a little bit of a French Foreign Legion vibe; maybe these guys are members of an Interstellar Foreign Legion where men go to escape their pasts.  I dig the big helmets.
Posted by Bill at 5:25 PM