My friend Tom and I got in a game of Galactic Heroes last night and had an excellent time of it.  He borrowed Crash Carter and the Space Rangers, while I broke out the Invading Saucermen.  We decided on a slightly modified scenario from the main book.

The Space Rangers have caught news that the Saucermen are building a new, ultra-destructive battlestation: a Doom Moon! To protect the Doom Moon while it's under construction, a force field is being projected around the station from a generator on a nearby moon, populated by bronze-wielding primitives.  Captain Crash Carter, Doc Libra and a handpicked team of Rangers arrive on the moon with a mission: to deliver a Nova Bomb that will destroy the force field generator, so that the Ranger fleet in orbit can destroy the Doom Moon before it becomes fully operational.

Lacking forest terrain, we set up a small outpost consisting of a number of prefab buildings placed around a transmission tower, with a few cargo loads of fuel tanks and generator parts for scatter and some ruined buildings to round things out.  As a special rule for this scenario, any time a Joker was played (Galactic Heroes uses a deck of playing cards for initiative purposes), a squad of natives (counting as Grunts, meaning they have one wound and only roll a D8, instead of a D10, for combat and task resolution) arrives to help the attackers. 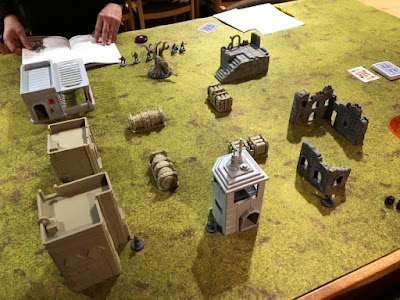 The game began fairly cautiously, with the Rangers advancing slowly and the Saucermen spreading out to meet them, with everyone hugging pretty closely to cover.  In Turn 2, however, things got wild; one of the Saucermen vaporized Crash Carter with a well-placed blaster shot, and then both jokers got played, meaning two groups of three native grunts arrived on the scene, ready to help the Rangers drive the Saucermen off their moon. 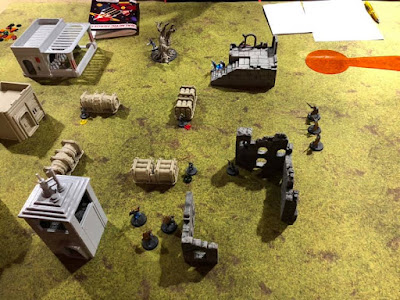 On Turn 3, the Great Intelligence, leader of the Saucermen, unleashed his psychic powers on the natives, throwing them around like rag dolls.  They regrouped, storming the transmission tower, but the Great Intelligence proved an able match for them in melee as well, throwing the blue-skinned humanoids out every window he could.  Commandant Garkon, his second in command, fared less well, swiftly butchered by natives blades. 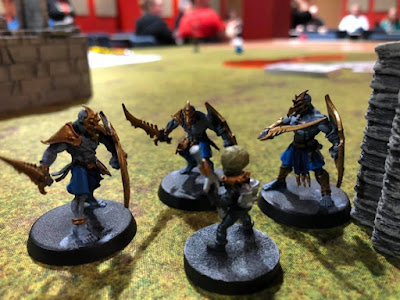 With the Saucermen forced to split their fire between the Rangers and the fanatical hordes of natives, they were quickly overwhelmed, and the Great Intelligence eventually succumbed to the waves of natives charging up into the tower control room.  With the Saucerman garrison obliterated, the surviving Rangers placed and set the Nova Bomb and got off-moon as quickly as possible, returning to the waiting Ranger fleet. The Doom Moon would soon be no more.

All in all, the game took us about an hour from set-up to breakdown, and was an enjoyable, leisurely evening for the both of us.  Tom it turns out has been a fan of the Fistful of Lead family of rules for years, ever since it was just a Western shoot-out game, and when I'd mentioned Galactic Heroes he'd gotten really excited to break out this system again.  I'm having a blast and I have other friends interested in trying the game out who couldn't make this game, so I'm looking forward to more play reports to come.
Posted by Bill at 3:08 PM