First thing's first, I am now a proud Union man - specifically, the Brush Wielder's Union, a collection of likeminded wargamers and miniature painters dedicated to getting their stuff painted and on the table and encouraging others in the hobby. 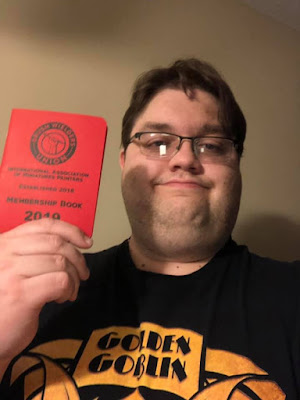 One of my local wargaming friends expressed an interest in his Age of Sigmar goblins pulling double-duty as a Dragon Rampant warband.  All he needs is someone to play against.  This got me digging my Liche and Skeleton Legions army out of storage, and finding it sorely lacking for what I wanted.  It was too inflexible, had too many easily exploitable weaknesses.  The answer? Build a fresh army.

After some brainstorming, and going through my project pile of shame, I settled on a warband led by a vampire, and composed of deluded and fanatical mortals who'd been duped by the vampire's promise of eternal life.  I put together a list with a little speed, some shooting, some melee capacity and a solid spellcaster at its heart, which I felt was pretty well-balanced. 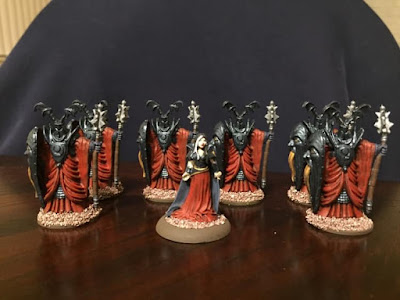 The army core is Countess Adrasteia Winterthorn (Reaper #07010) and her Sanguine Guard (six copies of Reaper's #77408, "Athak, Undead Knight" in Bones), comprising a Reduced Model Unit of Heavy Foot with the Spellcaster fantastical rule applied.  The robes are basecoated in Reaper's "Deep Red" and highlighted with "Fresh Blood," while the armor is done in "Gunmetal Blue" with some accent work in "Ancient Bronze" highlighted with "Antique Gold." Countess Winterthorn's cloak was basecoated in "Midnight Blue" and highlighted with "Twilight Blue." 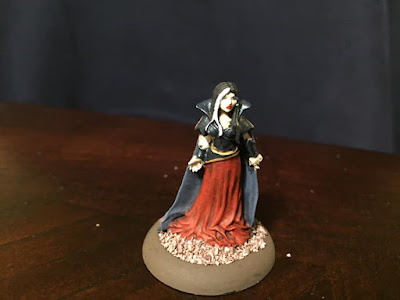 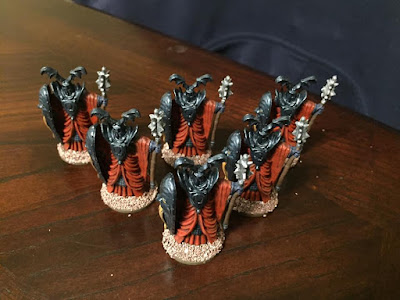 Last night I assembled the next unit in the army - a band of fanatical cultists that will be rated as Bellicose Foot.  These vicious maniacs compete among themselves for Countess Winterthorn's attention, hoping to spill enough blood to win her favor.  They're a dozen figures assembled straight off the sprues from Northstar's "Frostgrave Cultists" plastic boxed set. 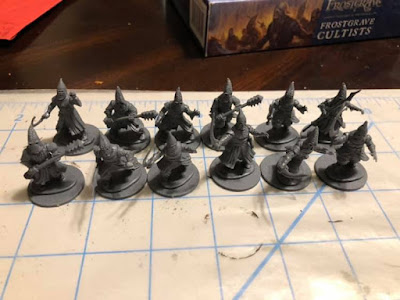 From here on out, everything else is going to be a conversion or kitbash.  I've got a box of Gripping Beast Arab Light Cavalry that are going to be converted into mounted cultists through the addition of heads and missile-weapon arms from the Frostgrave Cultists, and some Fireforge Medieval Russians are going to get turned into formal soldiery employed by the Countess.
Posted by Bill at 4:33 AM