Chariot of Chaos (not Fire)

Well I'll be darned.  My plans for a Kings of War Abyssal Dwarf army seem to be going on hold again, and instead I'm returning to Games Workshop's Age of Sigmar.  I'd initially put the game and my army in the closet and stopped attending events because I was getting disappointed and frustrated with the lack of interest in narrative play or scenario-use in my local area, but with the second edition preparing for release, interest has returned at my preferred local game shop, Just Games, and the focus does seem to be on using scenarios, victory conditions and narrative play.  So I dusted off my Chaos Warriors and Pink Horrors, and finished assembling and painting one of the units I'd started but was left unfinished last summer, a Chaos Chariot. 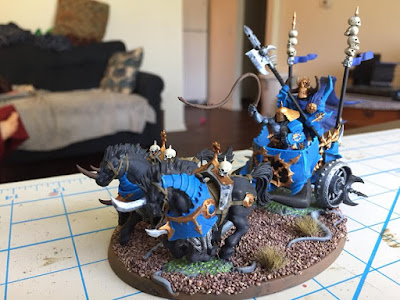 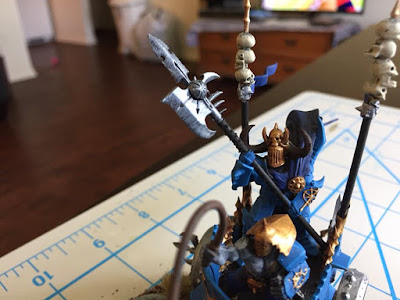 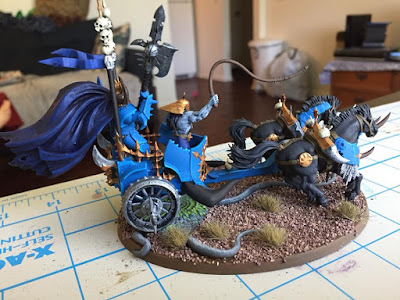 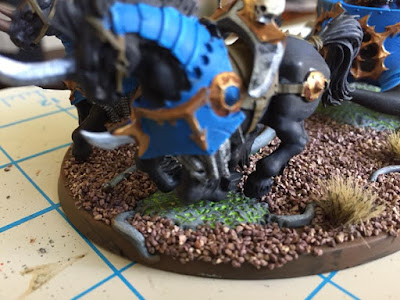 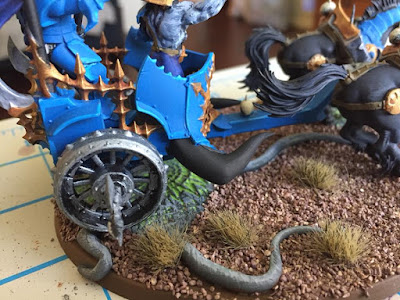 The only conversion I did, besides sculpting some tentacled runestones on the base, is I swapped out the helmets that came with the Chariot for the rider for one off the Chaos Knights sprue that I liked the look of.  I don't know that I'd build another of these - the kit was a bit fiddly, and I still don't think I have the yoke on quite straight.  Both horses are fairly small (or at least seem that way) and each only has a single hoof resting on the base, not exactly conducive to balancing and gluing them into place.
Posted by Bill at 2:25 PM