Happy Birthday to Me

I turned 31 last week, and as befitting the age, only my better half Gina and I got me presents.  All wargaming-related this year, and some lovely new toys among them.

Here's what I purchased for myself: 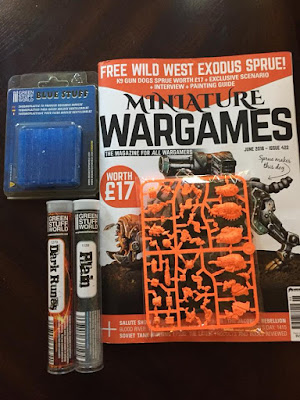 Two rollers from Green Stuff World (plain and "Dark Runes") as well as a pack of "Blue Stuff" thermoplastic which can be used to make molds and cast copies of pieces.  Then the latest issue of Miniature Wargames magazine; I would normally get this sort of thing digitally but I wanted the sprue of "Gun Dogs," steampunk artillery contraptions, from Wild West Exodus that came with the physical mag. Since I've decided to start up with Kings of War again, Gina gave me $100 and told me to buy myself the beginnings of an army; having been in love with Games Workshop's Chaos Dwarves since my first start in wargaming back in 2003 or so (naturally, after GW stopped producing them even semi-affordably), I decided to start on a force of Mantic's "Abyssal Dwarves," which share much the same tone and aesthetic.  $100 was neatly taken care of with the purchase of two regiments of "Abyssal Halfbreeds," Mantic's answer to the classic Bull-Centaurs of Games Workshop, and a package of movement trays to fit them.  When she saw what I'd bought, Gina told me that if she'd known I was going to buy movement trays, she would have given me an extra $20 to make sure I got some more fun stuff.

Moral of this story is always discuss purchases with your spouse. 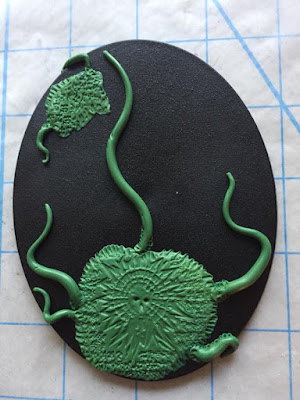 I've also dug my Age of Sigmar stuff out of the closet where it's languished for the better part of a year; I packed it up because I wasn't enjoying playing at the local Warhammer store, but a new guy wants to get Age of Sigmar started up at Just Games so I figured out an easy 1000 point list; all I have to paint is the Chariot I've had sitting primed and in sub-assemblies since last summer.  Unfortunately, it looks like the methods I used to try and clean up frosted varnish on my "Gaunt Summoner" have damaged his paint job, so I'll need to strip and repaint him at some point.  I'm not totally certain I want to get back into Age of Sigmar; I definitely don't want to be spending the kind of money Games Workshop thinks I should be, but a game or two couldn't hurt.

I decided to get out some Green Stuff and give the Dark Runes roller a try on the chariot's base; I ended up creating two "eruptions" of runestones out of the ground that then sprouted tentacles, in keeping with the style of Chaos.
Posted by Bill at 2:58 AM