Over the past week I've managed to finish off (mostly) two more units for my "Men of Albion" Dragon Rampant army - a Hill Giant, by Reaper Miniatures, and a dozen Perry plastic War of the Roses billmen.  These will be a single model unit of Bellicose Foot with the "Fear" special rule attached, and a unit of Offensive Heavy Foot, respectively.

In my thinking as to the story of this army, the giant was either press-ganged or sufficiently bribed (a daily ration of whole cow, maybe?) into joining the army; the mismatched gear he had accumulated - the shoulder pad, the shields strapped to his midsection - were painted with the colors of the army to show he was "theirs." 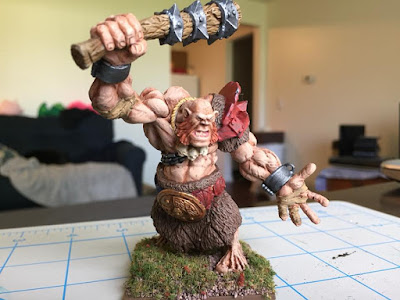 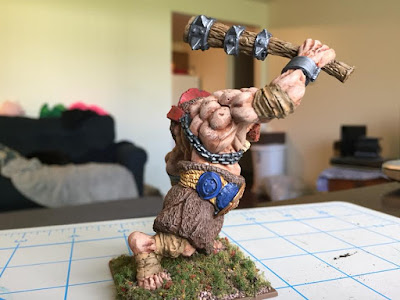 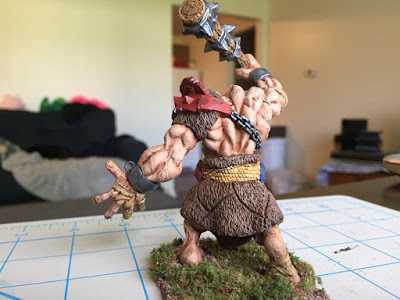 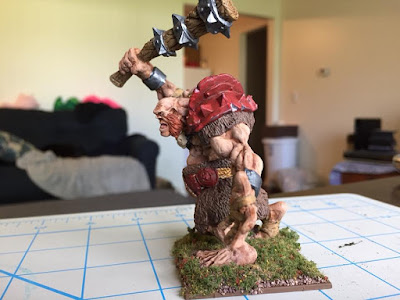 I chickened out on painting half his body as heavily tattooed; once the skin was finished I liked the way it looked too much to risk mucking it up.  And while I've seen a number of people paint his fur kilt as having been stitched from different color pelts, the uniform fur texture throughout made me think it's pieces of hide from multiple examples of the same critter; in this case, I opted to paint it as grizzly bear fur, with a dark brown basecoat and building up alternating drybrushed layers of a slightly lighter brown and a pale, silvery gray, probably three drybrushings of each color. 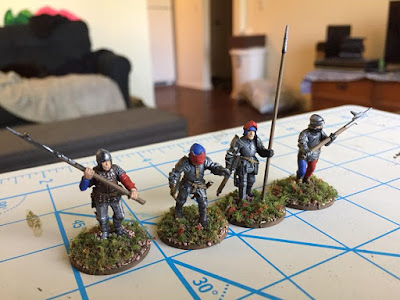 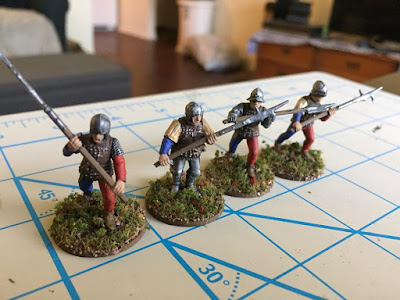 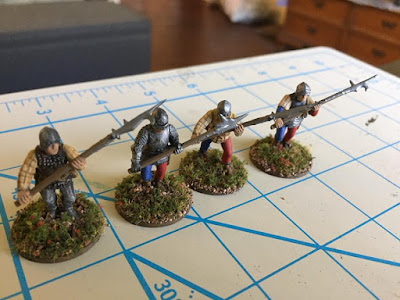 I still need to make a flag for the unit standard bearer and get these guys varnished; I had left my priming box in the hallway outside my apartment door overnight to air out and it got picked up and thrown in the trash while I was at work.  So I need to get another box; I've got a big Reaper order coming in on Tuesday that will hopefully work, if not I'll be grabbing one of the envelope boxes from work.

After this, just a unit of archers left to paint; once they're done, I'm actually going to be going back to Kings of War and doing rank-and-flank fantasy and hopefully finishing a 2000-point army in time to play with it at a tournament in November.  I had always wanted to collect a Chaos Dwarfs army in Warhammer Fantasy; alas, Games Workshop had nuked the army shortly before I discovered miniature painting.  So I'll be building an army of "Abyssal Dwarfs" for Kings of War in search of much the same aesthetic.
Posted by Bill at 6:49 PM