After the events of the previous night, Cor sat down with the two mysterious enchanted "blank" scrolls they had discovered in the dwarven catacombs under the Golden Castle.  Casting Identify on the first, he discovered a simple enchantment that rendered the text written on the scroll invisible except under the light of the full moon.  Consulting his star-charts, he sees that the full moon is two days' hence, on the 15th.  The second scroll bears the same enchantment, as well as a secondary spell - casting Dispel Magic to remove the ink-disguising dweomer would trigger an Explosive Runes, destroying the vellum scroll before it could be read.  Cor decides to wait until the full moon to read these scrolls and see what is hidden behind these spells.

This taken care of, the party descends into the burned out ruins of the Broken Blade Inn, curious to see if the tunnel and accompanying dungeon crawl they had observed, but not investigated, on their last visit [DM's Note: 9 sessions ago!] was still extant.  They found that it was, and that a small formerly-sealed crypt was down there, a tomb of some knight of Law, buried 300 years ago.  It was likely then that the tomb had been forgotten long before it had been built over, and had no real connection (other than spatial) to the Broken Blade.  Inside, they found that the sepulcher itself had been recently broken into, and arcane residue suggested that a magic item of not-inconsiderable power, some sort of item of protection, had lain here until very recently.  Untouched, curiously, was a stone chest filled with coins as well as a carved ivory drinking horn, inlaid with malachite and moonstones.  The party helped themselves to the contents, though Flora decided on donating her share to the Church of Law in Craghold.

Emerging from the rubble, the party was met by a messenger from the castle, informing them that Lord Vesper was requesting their presence at dinner that night.  Deciding they needed better than their adventuring clothes for this, and suspecting a trap, the party went to the local general store, where the proprietor, a dwarf named Slambo Stumphammer, as happy to help outfit them.  Cor bought a spare spell component pouch, some antitoxin, and a wide, blue conical hat with arcane symbols stitched in gold and set with a crazy amount of rhinestones; Lasair bought a dagger in a thigh-sheath and a nice dress, though most of the party ultimately decided to go in their clothes from the hobgoblin fete they had attended.

At dinner, the PCs and Lord Vesper were joined by Vesper's wife, Lady Erzebeta; his two daughters from his previous marriage, Wanda and Julia; Sir Dorian Hawkwood, commander of the mercenary company known as the Red Brotherhood; Brothers Bertram and Ambrose, clerics of the Church of the Everlasting Sun; and Sir Edras, the town sheriff, as well as Borut, the bailiff (whom the PCs already knew).  Over an excellent meal, Lord Vesper quizzed the PCs on their experience hunting witches and what they planned to do about whatever they found in town.  He was suitably impressed as Mivahl and Jager described their old exploits as part of a commando team sent out after rogue spellcasters.  Also over dinner, the party learned that there were no dogs left in Craghold - some unknown force over the past six months drove dogs and wolves mad, like rabies without the foaming, and Vesper had been forced to issue an edict calling for the destruction of all canines, even his beloved hunting hounds.  Sir Dorian's men were often called upon to perform wolf culls in the forest north of Craghold as packs of blood-maddened wolves would come down and start attacking outlying farms.

After dinner, Vesper brought the male PCs up to the ramparts for brandy and cigars, while Flora and Lasair followed Lady Erzebeta, Wanda and Julia for "needlepoint" - i.e., more wine and gossip.  Both groups swiftly learned that the rumors of Lady Erzebeta's demonic consortship stem from the fact that Vesper had been carrying on a poorly-disguised affair with her while married to his previous wife, and married Erzebeta swiftly after his first wife had died of a mysterious illness about two years ago.  Wanda and Julia have more or less accepted Erzebeta, if not as a step-mother, then at least as their father's wife. 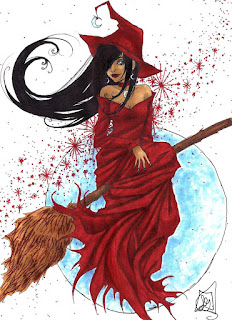 Both Vesper and Erzebeta proposed that a woman known as the Red Witch, a flame-haired middle-aged woman who had long been the villagers' source for cures for baldness, warts, impotence, constipation, etc., may be the one summoning demons; Vesper had banished her and made dealings with her illegal after she had failed to successfully treat his first wife's illness.  If she was still lurking around, perhaps she is the source of these summonings.

Dinner concluded, the party decided their best course of action to find the Red Witch was to talk to the people who might still be using her services.  They headed back to the seedy tavern known as the Whore's Arse for clues.

Jager struck up a conversation with Roz, a splay-legged half-orc prostitute whom Dormammu was renewing his business relationship with, asking her how she protected herself from disease-carrying customers such as Dormammu.  He learns that the Red Witch comes in to drink at the Whore's Arse on Bridesdays, and should be there in four days' time as per her usual.

Meanwhile, Mivahl targeted Melvin, a schlubby balding guy hunching over his beer at the bar. This proved a mistake, as Melvin launched into an entire saga of his life's misfortunes and failures: "I had my first midlife crisis at 11; I was a real pessimistic kid. Y'know, I really just came in here tonight hoping to find a woman who'd drank her standards low enough to go to bed with me."

Seeing Mivahl's trouble as an opportunity to have some fun, Jager paid Roz to "go over and take care of my friend over there." Roz sauntered over, spun Mivahl around on his bar stool and slammed his back against the bar.  "Looking for a good time, stud?" she growled.  All Mivahl can see are the blisters lining her lips.  "N-no," he squeaks, "But my friend Melvin here is," redirecting Roz's attention to the schlub still droning on about his failures as a living creature.  Roz took him right there on the bar stool as Mivahl beat a hasty retreat.

Cor orders a shot of Father Jack's Unstoppable Pissup, the local favorite that's like a 50-50 blend of Everclear and codeine cough syrup, and after signing a waiver, drinks it down.  He narrowly makes it to outhouses in time before the liquor starts kicking everything Cor has ever had inside him out.

Meanwhile, at the more upscale tavern The Golden Boar, Lasair attempts a different approach; she discreetly inquires where she might acquire a "little blue potion" for a male friend of hers having trouble with his "man-servant." The barmaid, throwing a glance at some nearby off-duty guardsmen, whispers back that the Red Witch drinks at the Golden Boar on Stormsdays, and should be there in three days' time as per her usual.

Reconvening (and pulling Dormammu off the chalk outline erroneously drawn around him in the Whore's Arse), the party discussed what they'd learned, debating whether to wait to meet the Red Witch at one of the establishments they already know she frequents, or whether to see if she's also a regular at the other two surviving taverns in town, the Fang and Flagon and the Drunkatorium.  The party decides to split up and case both remaining establishments today in search of the Red Witch.
Posted by Bill at 7:42 AM