Following the memorial service led by Mara, a number of the villagers at the town formerly known as Rodrigosburgh, but now rechristened "New Dawn," approached Mara asking for more information about the worship of Mishakal, and to ask her to take over the Cathedral at New Dawn, making it a site holy to Mishakal.  The townsfolk were very upset to hear that the cathedral had been promised to the Cult of Bormo, arguing that a religion of drinking, wrestling and fornicating was not appropriate to raise their children in.  The adventurers ultimately agreed with the town's reasoning, and it was decided to consecrate the cathedral to Mishakal, adding a shrine to Bormo to the Triumphant Hare, the inn now owned by Cor.

The party decided to investigate the dwarven catacombs under the Golden Castle again, in search of the hidden treasure chamber the demon had held over them as a bribe.  They found the chamber, behind a trick wall.  Opening the doorway, they found a short hallway leading to another door; Mivahl, entering, stepped on a pressure plate.  Glass plates, two inches thick, slammed down, sealing half the party into the short hallway and half the party outside. A nozzle opened in the ceiling, long-still gears whirring to life. 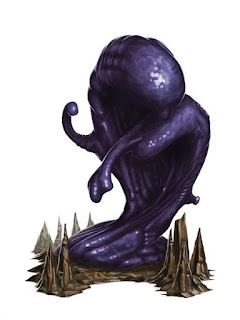 Unwilling to wait to be dosed with poison gas, Cor cast Shatter, blasting the glass plates to splinters and destroying the reservoir in the ceiling above - resulting in the long-dormant Black Pudding contained in the ceiling above pouring down on them all at once, rather than being sprayed at them in a pressurized stream.

The vast blob of inky blackness poured down, spilling over Mivahl as he tried to block its descent with his shield.  The party attacked the slithering shadow pooling around their ankles, with the Pudding splitting twice, forming three attacking slimes - once divided by Zerin's sword, and once by a lightning spell cast by Cor.  The Puddings flailed out with pseudopods but failed again and again to connect, while the party pounded on them with blunt weapons and non-electrical spells.  Ultimately, the Pudding was beaten into so much lifeless slime.

Beyond the second door, the party found wealth beyond anything the demon had hinted at - 470 platinum pieces, 500 electrum pieces, 1,000 gold pieces, 3,900 silver pieces, and 9,500 copper pieces, as well as a Cloak of Elvenkind and a Brooch of Shielding.  Lasair took the Cloak and one of the casters [I want to say Dormammu, but I honestly forget at the moment as there was a lot of debate over who should have it] took the Brooch.  Ultimately, the party took only a small amount of money for themselves, deciding to devote the remainder of the cash to making improvements to the town of New Dawn.

The next day, Anoroc, last priest of Bormo, arrived in New Dawn, riding a wagon drawn by his trusty bear companion Jaroslav, carrying the ceremonial items of Bormoism, including his ceremonial head-gear -- the dwarven equivalent of a baseball cap with cup-holders on the side.  He also had the Book of Bormo, a scrap-book of weightlifting advice, protein shake recipes, brewing tips and softcore dwarven pornography.  It's not every holy book that has a centerfold, but the Book of Bormo does - an image of a chainmail bikini-clad dwarf woman bench-pressing a zebra.

Once Anoroc was situated, the party took stock of their situation and debated their next move.  They decided to return to Craghold to see how Cor's first inn was doing, then zig-zag up the Maw to Molekh to treat with the Great Khan about hanging on to the lance Empyreal Vengeance for the time being, and then try their luck again with the undead knights of the Groaning Keep.  From there they will head west, where Mivahl wants to challenge Duke Beldor to a joust - the Duke having a long-standing offer to name the first challenger to unseat him as his heir.  Once that is addressed, they will head south-west to investigate claims of an ancient road of enormous stone blocks, all carved like dragon scales, half-sunk in the slimy waters of the Dismal Swamp.
Posted by Bill at 5:53 PM