Diehard Sci-fi Troopers and an AAR

I'd hit a bit of a painting slump again - I'd start projects but feel no sense of passion towards them or desire to finish, but finally got myself motivated and finished off a couple figures this weekend while watching Reaper Miniatures' virtual convention.  They won't win any awards but I'm pleased with them nonetheless. 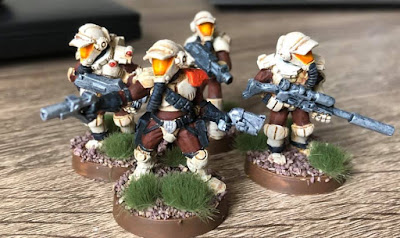 These are "E-Corps" Sci-fi troopers from a recent Diehard Miniatures' Kickstarter - I've got a fifth figure with a rocket launcher but I didn't want to put two special weapons figures into a squad for Fistful of Lead: Galactic Heroes, so I stuck with the sniper.  I've got a Warbot on the way from Diehard which will be painted in these colors and added to their squad.

I also got motivated enough to clear off the dining room table, set up some scenery and hold a solo game of Galactic Heroes.  I decided on a simple scenario: A corporate spy carrying a hard drive full of secrets has crashed and hidden out in an abandoned, overgrown colony town.  The E-Corps asset recovery team has been sent in to retrieve him and the hard drive (I pulled an old Grenadier robot I'd previously painted to stand in for E-Corps' Warbot).  Unfortunately, a gang of Space Orks had also seen the ship crash, and were looking for the spy...for lunch. 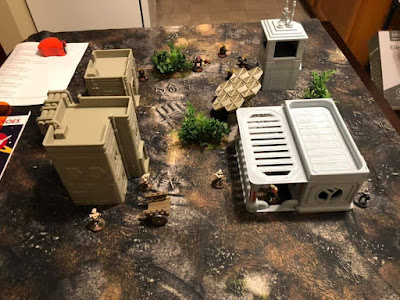 I decided that any time a figure spent an action searching a building, I'd roll a D10, adding 1 for each building that had previously been searched.  On a modified roll of 10+, the spy had been found; if I didn't get a 10 before the last building, he'd be there.  For added mayhem, I decided a natural "1" on the D10 roll would mean that an Alien Monster had been lairing in that building, and had been awoken.

Naturally, a "1" was rolled on the very first building checked, and suddenly the Orks had a Ravenous Bug-Blatter Beast on their hands: 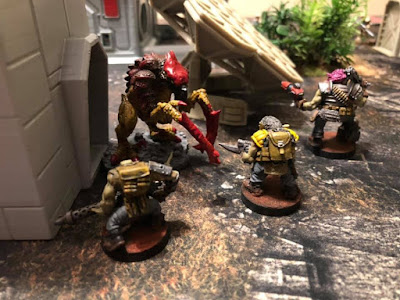 The Ork Boss charged at Sit-Down, chainsword raised, and got clocked right between the eyes with Sit-Down's shotgun butt for a solid Wound! Taking advantage of the situation, Captain Ando of E-Corps advanced to the edge of the roof he was on and took a long shot with his autopistol - which paid off in spades when the Ork Boss collapsed to the ground stone dead! 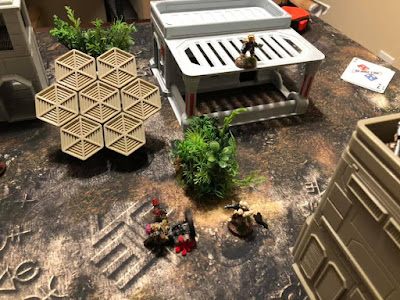 Tanka then charged Sit-Down and, much to his surprise (and Sit-Down's), got hit in the chin with the shotgun butt hard enough to lift him off the ground and send him sprawling, out of action.  Why Sit-Down even bothers loading that shotgun is now a mystery, given what an unstoppable weapon the butt of it is.

Davy, though shaken by a sniper bullet, wasn't about to accept Sit-Down's battlefield supremacy, charged in and headbutted the shotgun into metallic splinters.  He and Sit-Down began shoving back and forth, neither gaining a clear advantage but Sit-Down definitely beginning to weaken.

Meanwhile, Captain Ando found himself dueling Cap'n on the roof of one building, Sgt. Clutch the E-Corps Sniper took out Bomba with a well-placed shot, and Wally the Warbot climbed the tower that Baldy, the Ork heavy weapons specialist, had holed up in and began punching him with metal fists. 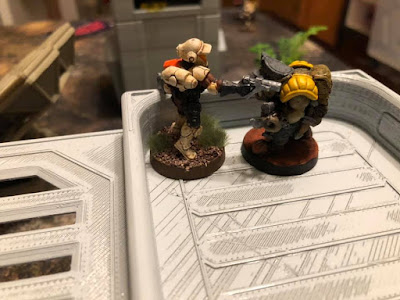 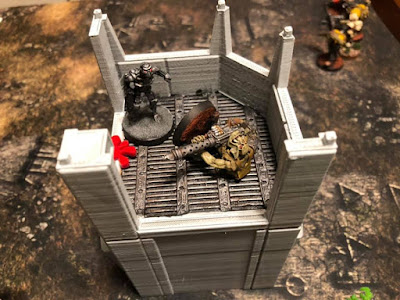 Sit-Down finally fell, out of action, but by that time Davy was the last Ork left on the field.  He turned and half-staggered, half-charged Sgt. Clutch - and was knocked out by one swing of the rifle butt.

Exhausted, with two men out of action and Wally spilling oil from a hole blown in his side, E-Corps grabbed the corporate spy and called it a day.  They had completed their mission.