Tonight I finally got a chance to playtest the new Perilous Tales rules available free from Planet Smasher Games.  Let me set the stage for you...

Desperate for any means of reclaiming his country from the Bolsheviks, Count Casimir Razumovsky has heard rumors of an ancient artifact, the Golden Idol of Ish Kabibble. The Idol is said to contain a powerful bound demon, consigned to the service of any who possess the Idol. The Idol was last seen in Stregoicevar, a ruined and allegedly vampire-haunted village in Romania…

Our heroes were Count Casimir's Trans-Siberian Renegades from Pulp Figures, statted out thusly:

Their objectives were "Find the Precious," "Escape!" and "Hunt the Fiends," so they need to find the Idol, kill some minions and flee for their lives to succeed.

Our villains were Count Ludwig von Blutburg and his minions.

The game doesn't have specific rules for haunted European villages yet, so I gave Stregoicevar the "Thousand Cuts," "Creeping Horror" and "Raging Storm" complications. 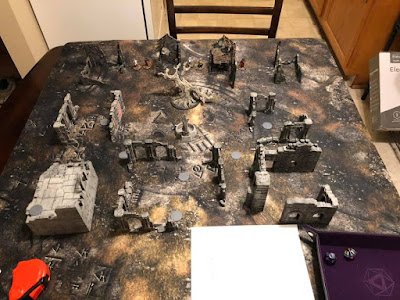 I kind of crowded the table with a mix of 3D printed pieces, Age of Sigmar ruins, Warlord Games ruined hamlet pieces, and a gnarled tree and sinister well from Reaper's Bones 4 Kickstarter.  What can I say, I like crowded tables.

With the Countess' falcon informing them of an encroaching storm, our heroes advanced cautiously through the ruined village; Yolanda however was almost immediately ambushed by a vampire thrall! 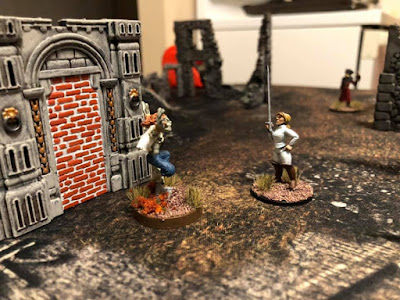 The foul undead scored an immediate SIX wounds on her, and sent her sprawling in the dirt.  Misha opened fire on the beast, wounding it. 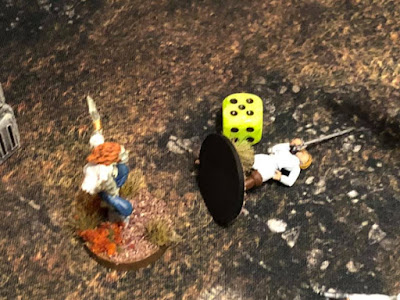 As they advanced, Count Razumovsky was attacked by a second thrall and knocked flat on his back, and Blotsky disturbed Count Blutburg himself, finding himself wounded and marked as a future thrall for his troubles. 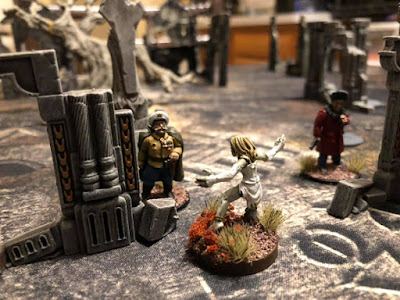 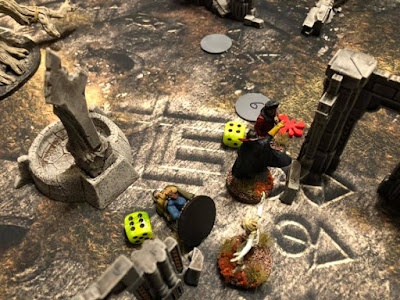 Turning into a bat, the Count sought tastier throats, while Blotsky found himself attacked by a swarm of bloodthirsty bats.  By the time the swarm moved on to Misha, Blotsky had risen as one of the undead, lunging at his former employer.  Blutburg tried to feed on the Countess, while Yolanda skewered the thrall in front of her on her fencing foil. 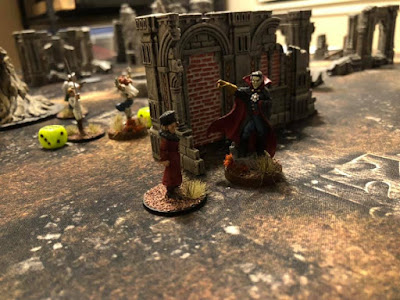 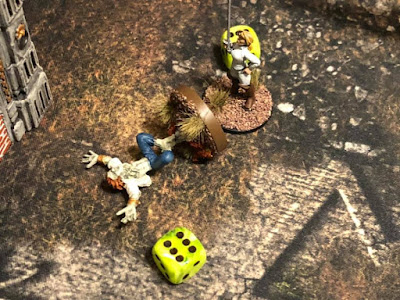 With the sky opening up in a torrential downpour all around them, Misha made surprisingly short work of the bats swarming him, and Count Razumovsky smashed in the face of the thrall in front of him with one hamhock-sized fist.  Badly wounded, he turned and faced the former Blotsky as Count Blutburg decided to try his luck with Yolanda. 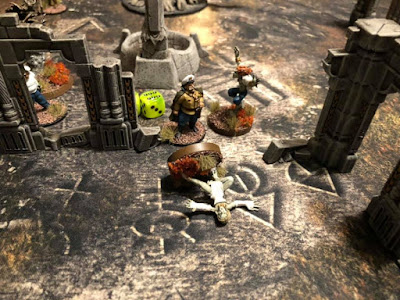 Misha discovered the Golden Idol of Ish Kabibble in a ruined house, and Count Razumovsky decided that discretion was the better part of valor, informed thrall-Blotsky that his bootlaces were untied, and took off running when the former secret policeman looked down.  As Yolanda whipped her foil back and forth to keep Count Blutburg's hands off of her, the sun began to rise over Stregoicevar, breaking up the storm clouds and sending the remaining vampires back to their crypts. 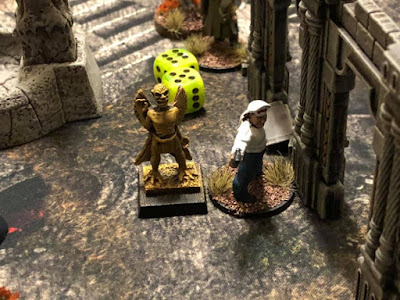 Tallying up my victory points...1 for Count Razumovsky making it off the table, 1 for killing three minions, 3 for finding the Idol...gives me 5 victory points, which translates into a victory score of "D." Not the heroes' finest moment, to be sure!

This was definitely a challenging game; the villains' dice were hot all evening, with both original thralls rolling multiple critical hits.  The Vampire Count's "Bat Form" ability, which sends him darting around the table every turn, makes it very hard to concentrate fire on him.  If I'd had one more turn I could have probably turned it around by getting the Countess and Misha off the table, but it just wasn't meant to be.

Overall, I really enjoyed myself playing this and I'm looking forward to my next game of Perilous Tales; this game took an hour and a half from set-up to completion and that's with me checking the rules every two seconds.  What will come next? Find out next time on Perilous Tales!
Posted by Bill at 7:56 PM