Atticus has been a very good boy lately about not jumping on the table or countertops, so I decided it was okay for me to start painting again.  I decided my first project would be a larger Bones figure I purchased an assembled a month or so back - a "Goroloth" by Reaper Miniatures' terminology, but a respectable stand-in for one of my favorite monsters from Dungeons & Dragons, the Aboleth.  The assembled figure is about 7 inches long.

Aboleths in D&D are giant, psychic, ancient fish who hate the gods (being old enough, and having a racial-memory stretching back far enough, to remember a time before the gods, when the Aboleths were the most powerful beings in the multiverse) and act as sinister manipulators from behind the scenes, using cults of surface-worlders and (in later editions) menacing fish-men called "Skum," to exert their will beyond their flooded cavern homes.  More grotesquely, the Aboleths produce a disgusting slime, exposure to which causes mutation in surface-worlders, robbing them of their ability to breathe out of water and making them reliant on the Aboleth to survive.  Even moreso than the more famous "Mind Flayers," the Aboleths are the big success at introducing a Lovecraftian entity in D&D.

They first appeared in 1st edition AD&D, in Module I1, Dwellers of the Forbidden City, released in 1981, and appeared in Monster Manual 2 shortly thereafter.  Truth be told, as much as I love the Aboleth, I haven't had an opportunity to use one as a DM yet.  This didn't stop me from buying the figure. 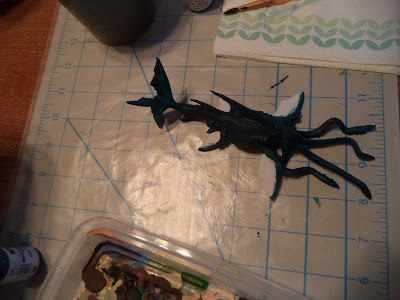 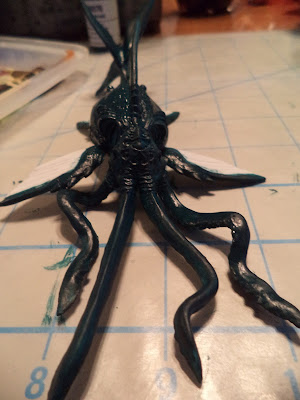