I'm vastly behind on my painting.  I have a couple miniature projects in various stages of completion, and I've completed my entry for the "L'amour" bonus round of the Painting Challenge.  I'm particularly pleased with my entry for the "Defensive Terrain" round - I interpreted the name literally, and had the terrain be on the defensive, as an Earth Elemental struggled to fight off a team of undead miners directed by a witch.  Here are some pics: 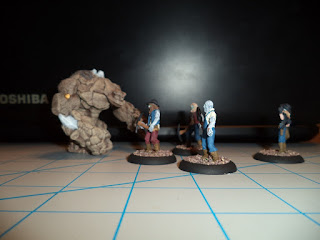 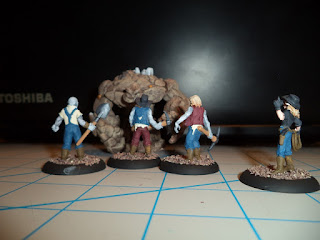 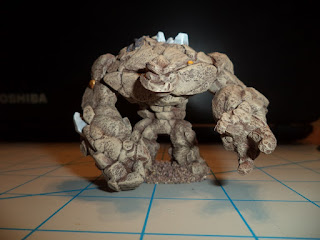 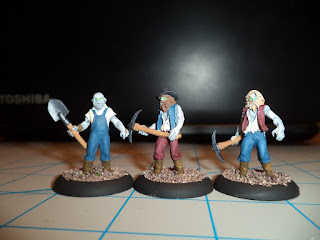 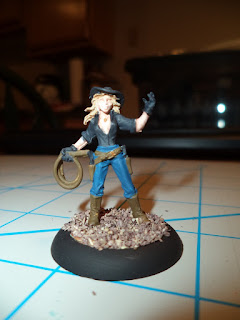 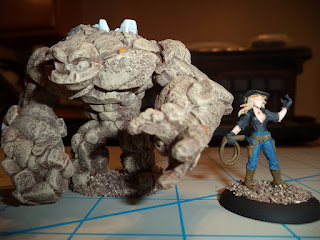 The reason I haven't been painting too much is that I've been writing a whole lot - I've had two story proposals accepted for inclusion in upcoming anthologies.  One of my stories is complete and has been submitted, the second is in the works.  I'm also working on a third piece, my first try at fantasy fiction, to submit to a new magazine.

In other gaming news...

My two Call of Cthulhu games at Running GAGG this year have me feeling pretty good about that, and I'm looking ahead to other cons to run Cthulhu at, plus the possibility of arranging a monthly store game at a gaming store in Buffalo.

I've been invited to take part in a Savage Worlds game in the Deadlands weird west/horror setting, which should be fun, though I'm a little wary - I sometimes think I'm under a curse, that any RPG I join as anything but the Game Master is fated to die after the session I join.  Every game I've joined since I graduated college in 2009 has died after the session I participated in.  It's eerie.

I'm also considering the possibility of another home game - probably some form of Swords & Wizardry again, as I really like that system, though I'd use Ascending Armor Class this time - it really is just a more sensible system than the attack matrices.  I would do either "regular" D&D, without any science fiction elements of the sort I had last time - though I'd operate under the same sort of campaign framework, with the player characters free to wander and find their own adventures rather than adhering to a pre-planned story - or use the Swords & Wizardry rules in conjunction with the Warriors of the Red Planet book to run a full-on Barsoom-style game.

A lot is going to depend on my time and attention - right now writing fiction is holding on to my attention very tightly, to the point where I don't want to divert attention from that to preparing game material.
Posted by Bill at 6:17 PM